When you think about social networks, what do you think of? Big, depersonalised “things” where people happen to talk about the same stuff? Or do you think about it as thousands people of similar tastes crammed into a big room? Having been involved in a total shitfight on Twitter recently, I think it’s more the latter.

Before I go on, I’ll explain what happened. If you are familiar with Twitter at all, you would know that Friday is #followfriday day, where you tweet out recommendations of tweeple that your followers might want to follow. It is the only type of ‘institution’ of its kind that I know about in social networks, and it can be an extremely positive occasion. You recommend people to others, others recommend people to you, and you generally find someone or something new to read about, to follow, or of which to become a fan. It also has the ability to rapidly expand your own network, because you suddenly become known as somebody with an enormous network, if you do things right.

For Metal as Fuck we have a #metal #followfriday, comprised of bands, labels, scenes, promoters, venues, festivals, our own team, and a random selection of our awesome followers. Generally the ‘random selection of awesome’ is comprised of our network champions: those people who retweet us, who dig what we do, who recommend us the most.

So, on Friday 9 October 2009, we tweeted out our Metal Bands on Twitter list, which is the only list of its kind online, and is certainly the largest. It expands weekly. Where we began by tweeting out the individual bands, we don’t do this any more because the list is farking enormous. Go and have a look and you’ll see what I mean.

What happened was that there was a debate about whether or not one particular band ought to be in the list. Two followers were vehemently against them being included, one or two others wanted them in, and everybody else (keep in mind our network is in excess of 2000 tweeple) was quiet and could therefore be considered to not give a shit either way.

And, in the most dramatic move, our Los Angeles columnist spat the dummy in a big way, after requesting us not to include christian bands in the follows list. In the interests of transparency (this is all public anyway), this is how it went:

@metalasfuck please get rid of christian bands off the list

To which we replied:

@BrendanBiryla No. Won’t happen. If it’s metal it stays regardless of religious orientation.

Upon us telling this dude that we have a policy of no discrimination, he tweeted:

So he evidently believed that if it’s metal as fuck, it absolutely has to be anti-christian.

For me personally, as the editor of the magazine, I was caught in a total quandary. I am completely anti-christian. I am quite generically anti-religious; and I have very strong views on this; not that you’d really know because I don’t bang on about it – it’s not my place to tell people what they should and should not do. But I do go so far as to have a favourite piece of jewellery that looks like this (below). This image, by the way, is my standard avatar now across all of my personal social networks: Twitter, MySpace, Facebook, etc. 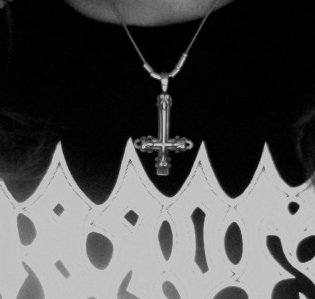 But what I cannot do, in my professional role, is allow that to influence the content of a publication of which I am at the helm, otherwise I am no better than any religious person who allows their moral views to influence what they do. Besides which, I am fiercely anti-censorship too; and of the two extremes, the anti-censorship side of me wins. If I begin to censor what goes into the magazine on the grounds of moral stance, then I’m in deep water and terribly unstable territory. It is far more stable to make decisions based on genre and music: that is, after all, what the magazine exists for.

In the end, this writer told us that if we included christian bands in our magazine, that we could find another writer. He did this publicly: it went out to his network, and to ours. This is what it said:

Well, fuck me dead, I thought. What a reaction to have. And, honestly, it made me incredibly mad. The way I feel about the team generally, and about our stance in regards to the metal community at large, is a particular lyric that runs:

I’m sure I don’t need to tell you what band sang that line. Our team is a bunch of shiny, happy people holding hands, and that’s the way we like it to be. Confrontation – public confrontation – over religion – was a real shock.

After this event, I decided that things had gone far enough and called a halt to the bullshit. Here is what I tweeted:

Ok. Religion rants are OVER. We are the way we are. Deal with it or unfollow at your leisure. Stay tuned for #followfridays coming your way.

And, even though this is going to lengthen my blog post by quite a bit, I just want to demonstrate to you the power and strength of sticking to a definite line that is straight down the middle. Here is a selection of the support that we gained:

RT @metalasfuck It’s not our place to censor metal of any kind. If it’s metal, it’s METAL. End of story. No more arguments. <-AGREED \m/

@metalasfuck I don’t see what religion has to do with music! If it rocks, who cares if they’re Christian, Buddhist or any other religion!

RT @metalasfuck: It’s not our place to censor metal of any kind. If it’s metal, it’s METAL. End of story. No more arguments.>>Hell ya \m/

@metalasfuck I agree. Recently offered similar diatribe. Subversion + metal = rebellion (even if it’s for Jesus). & I have a 666 tattoo.

@metalasfuck As an Atheist metal fan I respect your stance on non-discrimination based on religion. Everyone should be given a fair shot

@metalasfuck Wow, that’s sad. Better off without that writer then.

#FollowFriday @metalasfuck @followthreaper for keeping #Metal uncensored the way it was ment to be. \m/(>_<)\m/

The POINT of all of this blather is that social networks aren’t always happy, lovely, fun places to be. You get a huge number of people with substantially similar interests and put them in a small space where they bounce off each other all the time, and you are going to get conflict.

People often forget that the internet is merely society as it is – in all its wonderful, horrific, warm, and disgusting glory – condensed. Once you get highly involved in a society like Twitter, then you’ll find that you have a fabulous community (if you do your work right, and if you nurture your community too), that is like the internet but condensed. Aggravations happen easily. People’s opinions come out at (sometimes) the slightest provocation.

When you’re facing your TweetDeck, or whatever client app you use, to interface with Twitter, you could be forgiven for thinking that whatever your network is, is facing you. Wrong. What you see is the tip of the iceberg. Generally, unless you auto-follow everybody in your network, you only see who you follow; and everybody else is behind the curtain of privacy, merely watching what goes on.

This instance of confrontation – at this level of intensity – is pretty rare. This heated exchange and goings on went on for literally two hours, maybe more? And it was good as well as bad. Allow me to explain.

The good things are that it allowed us to do the following:

But at the same time, we nurture our network. We talk to people. We select our network champions for our follows. We interact with our network, ask them their opinions, engage them in industry chats. We like to think of ourselves, not as being all high and mighty and loftily sitting atop this great mountain that is Music Industry, but as just one of everybody else. And therein lies the difference between what we do and what so many others do.

Sure, we have a particular stance on what goes into the zine, what goes into the shop; we run the publication as we’d run any other magazine, and that implies certain business nous and business decisions. But we are also metalheads ourselves and are part of the community that we want to give back to.

So, before you dive into social networking, think really hard about the bad things that can come out of it. If we had handled this particular situation differently, this one incident could have been a total public relations disaster. But it was thanks to our knowledge of how social networking works, and to the strength of our networks and communities, that we all came out the other end battered and, perversely, refreshed.

Better yet – now everybody knows where we stand and why. Fingers crossed we don’t ever have to go through it again.

2 thoughts on “Social networks: the good, bad, and downright confrontational”