The number of bands on this bill surprised me. Being a bit of a scatterbrain, I’d not realised that there were more than one support act. So, rocking up thinking that it would be a typical weekday show, I figured there’d be maybe one support plus the co-headliners. 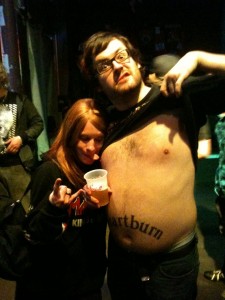 WRONG. There were multiple support acts: Universum were the first that I caught; Double Dragon were the second.

Now, I’m not a fan of Universum. Last time I saw these guys, they were supporting DragonForce if I’m not wrong. I was kind of surprised at their professionalism but at the time they rubbed me the wrong way.

This time around, they still didn’t manage to convert me, but they were tight and professional if nothing else. Universum play a style of electro/industrial metal that they do well. It was a nice performance, and way more relaxed than the last time I saw them on a stage.

Double Dragon are a band I have seen a bajillion times around the place. And so, I am really sorry but I just couldn’t pay them the attention that they deserved. They were tight as they always seem to be this time but… for some reason they seemed to play a bit slower? I don’t know – perhaps it was just my take on their set. It was good, not my thing, but the kids were definitely getting into it.

I think perhaps I was just hoping they’d get off the stage so I could indulge my Black Dahlia Murder anticipation!