Iron Maiden 2011: Arena show VS Soundwave. Which one wins? 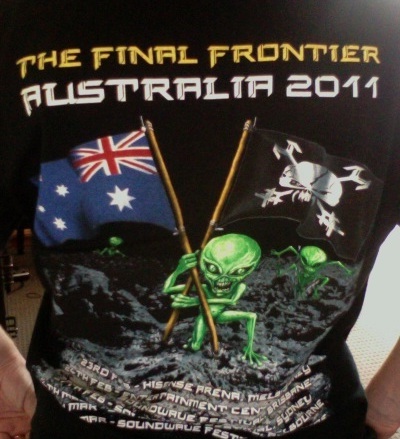 In the past couple of months I’ve seen Iron Maiden twice. The first at an arena show in Melbourne, the second at Soundwave Festival in Adelaide. And I have to say that despite how amazing Maiden are, and despite it being my first ever Maiden show, the Soundwave Festival kicked the arena show’s arse. 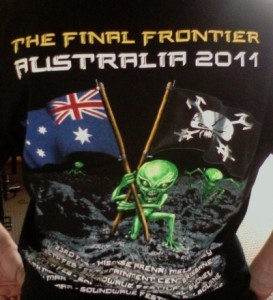 The first show (the arena one) I blogged about in the pre-event excitement, which you can read here. And it’s only now that I realise I took hardly any photographs of the trip; somehow this is always one of my downfalls, and I wish like hell I’d taken far more pictures. Ah well.

Once we got to Melbourne, we grabbed the Skybus from the airport into town. And then hoofed it from there to our accommodation in East Melbourne. It was a considerable walk: about an hour, or an hour and a half, with all our stuff, and taking a wrong turn (my fault). But you know what, navigating cities is so fucking easy these days with Google Maps on your iphone. I remember doing it as a kid in Melbourne, with a hardcopy map, and only being able to see the city; not its surrounding suburbs. The walk to our apartments was lovely, though. And I had a running commentary on the Blind Guardian show that happened at The Forum years ago, when we walked past it, and sundry other things on the walk.

Once we got to our apartment, we were knackered. It was hot, we were sweaty. We were also hungry. Our flight was at something like 11.30, we got to Melbourne at about 1 pm or 1.30 pm. We got to the apartments at something like 2.30 or 3. On the flight over, we’d discovered that Christchurch had been hit by a mega earthquake. This was really not cool, because The Man’s best mate lives in Christchurch now, nobody could get through to him, and we were heaps worried. So, needless to say, we kind of watched shitloads of footage on the telly that afternoon, while answering SMSs and etc.

But after a while, I went for a sushi run. Having sussed the Google Map and the whitepages, I figured there must be a sushi place not far away, so went for a bit of solo exploration. Less than five minutes down the road, I discovered the top of Bridge Road. ‘Ah ha!’, thinks I. ‘This is awesome!’ For not only is Bridge Road full (and I really mean chockers) with factory outlets and discount fashion stores (all dresses $5! OMG), there’s also good eating down that way.

After having a snoop and a squiz, and generally enjoying myself, I managed to score sushi, and juice, and sundry items, and then faced the long walk back up the hill. So it really took me about an hour… When I walked back in, I was sweaty and sore, and proclaimed, ‘Wow you better love me for this!’

We ate awesome bento boxes, hung about, watched some silly telly, and generally just relaxed all the rest of the night. 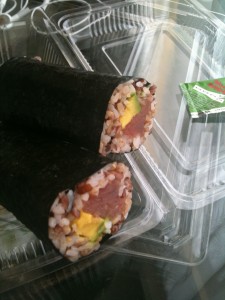 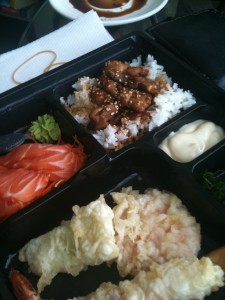 The following day, up early, we went scouting to see where the Iron Maiden fan club tickets were being given out. The tickets weren’t posted out. In a bid to prevent scalping, fan club members had to pick up their tickets on the evening of the show. No time was given, only the notice that they were available across the road from Hisense Arena. It was a lovely walk down there, we scoped it all out, and having done that, went back to chill.

Then mates from Sydney arrived, so we spent the day walking around Melbourne, checking out Missing Link Records, (which I’ve since discovered is for sale) and talking shit, before we sorted our shit out for the show.

Lucky we had sussed things out, because at about 4 pm, we rocked up to where we figured the tickets were being given away, and there they were! Being handed out by a woman, from a box resting on the top of a concrete windowsill, who wasn’t asking for identification or anything. With tickets hot in our sweaty paws, we went to check out the merch out the front of Hisense – which was still being set up.

It was lucky that we got our tickets when we did. Because after more friends turned up and we had a chat, we went back to the ticketing area… only to discover that they were being properly set up, and fan club members couldn’t get their tickets for nearly another hour. So we did what all good mates do: left them waiting there alone, while we went to find more peeps to hook up with, who were supposedly at The Corner hotel in Collingwood.

More walking! Got there, looked closed (we’d heard it was closed all day), so went to the next pub up, only to be told everybody was at The Corner. I swear the woman who told us this was a transsexual; she had the deepest voice (on a chick) that I’ve ever heard. Even trannies I know don’t have voices like that!

Anyway, backtracking occurred. And when we emerged upstairs, we were greeted with super excited Maiden fans, most of them drunk as hell already, singing Maiden songs, and getting awfully excited. It was awesome for me to see because, while The Man had been amongst it a number of times before, this was my first Maiden show. I also had the opportunity here of catching up with Radar Media to talk about the handover of Metal as Fuck, among other things. And I also drank way, way more than I should have.

So the walk back to Hisense was tons more fun than was the earlier walk away from it. Once at Hisense, we had to buggerise around getting armbands, then our lovely Sydney mate went to get me a hotdog, and by the time I got it, we were down the front, on the floor, well close to the stage.

The support act for the night was Rise to Remain, a band that is fronted by Austin Dickinson – Bruce Dickinson’s son. They play fairly average metalcore, which has redeeming moments. But they are tight, Dickinson’s vocal performance is excellent, the dynamics on stage are awesome, and they work it for every inch. I recall saying afterwards to someone on Twitter that if I had a label and saw Rise to Remain when they were unsigned, I would have signed them on the spot. They really surprised me, and I thoroughly enjoyed their set. Back in Adelaide later, I told everybody I could to go see them at Soundwave, because their live show is totally worth it.

The Maiden set was great. As far as all the bands I’ve ever seen on a stage, Maiden would easily rank as the best. Outstanding performance, great skills, tight as fuck. But it was a bit of a let-down for a couple of reasons. The first is that I drank way too much at the pub earlier and nearly flaked it a third of the way into the set, so had to go scab water off of security and sit down for ten minutes, which very nearly ruined the show for me. Who wants to have to sit down worrying about whether they’re going to black out? Not me!!

Admittedly, Maiden didn’t look fabulously into it. It looked like work, despite every positive element of the performance. I honestly don’t blame them, though. By all accounts, last time they were in Melbourne, the crowd went bonkers. This time…? Fuck me dead, I was a bit shocked.

Which is why the Soundwave performance in Adelaide absolutely kicked its arse. Iron Maiden played the same set (don’t ask me what it was, because at this distance I wouldn’t faithfully be able to tell you), but the crowd! I was talking to a mate who’d come from Melbourne to the festival, was standing back behind the second barrier because I wasn’t allowed down the front thanks to having a bag with me, and could barely see shit, being the short-arse that I am. And it was still amazing.

The difference in the crowds, and in Iron Maiden’s response to those crowds, was what made the Soundwave show so much better. Every person around me sang every word to every song, even from The Final Frontier! Old men were jiggling up and down with excitement, people of all genders and ages were in tears, it was absolutely massive.

And as always, Iron Maiden’s performance was outstanding. I don’t care whether you like the band or not, but if you are in a band and haven’t studied these guys on stage, you are a knob. It’s that simple. You learn from the best in the business, and Maiden is where it’s at.

Would I go see them again? Do altar boys shit blood? Man. Next time, if I can do it, I’m gonna see Maiden play in every city in Australia that I can physically get to.

3 thoughts on “Iron Maiden 2011: Arena show VS Soundwave. Which one wins?”