The art of persuasion… for writers and readers (or consumers) 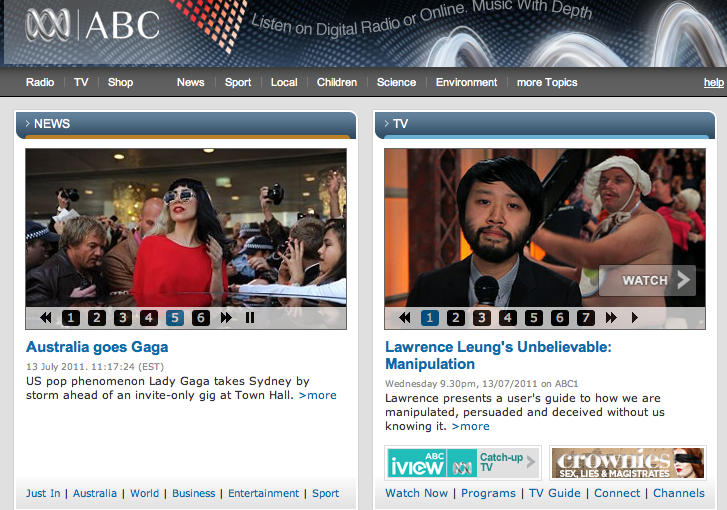 Persuading people is an art. Anybody who has studied argument-writing knows this. And it is what amused me about logging into the ABC website and seeing this:

If you’re like me, and you don’t consume popular television at all (yeah yeah, oh the gasp, shock blah blah), then you could be forgiven for thinking – not knowing any better – that Leung’s Unbelievable is a serious show. Especially with that blurb beneath the title:

Lawrence presents a user’s guide to how we are manipulated, persuaded and deceived without us knowing it.

You will likely be drawn into this conclusion by the fact that it is the first thing on the ABC homepage, alongside the broadcaster’s top news stories. While this picture (above) depicts the popular puppet Gaga, the other headlines included things like carbon rorts, consumer confidence reports, Murdoch’s hacking allegations, and so on. Furthermore, given that the ABC occsasionally does post some entertaining and informative material – Gruen Transfer, anybody? – all the arrows point in the same direction.

The wrong direction. Leung’s show is not serious at all, and this episode about manipulation is what you would expect from white trash pulp: tarot readers, psychics, debunking the notion of alien life, and so on.

The one thing it did right was push me to write about the art of persuasion. And this just after I was moaning on Twitter the other day about how I never get blown away by teenagers’ ability to think critically any more. We had to, when I went to school, there were whole assignments based on the skill. How to critically analyse the media; how to critically analyse symbolism; and other such postmodern bits and bobs.

Then I hit uni and learned what critical thinking is really about, a million years ago in first year. I am amazed I remember any of it, because it was tough going when I was 19.

Regarding persuasion, the man with whom the buck stops is Aristotle.

Ever hear about our brothers ethos, logos, and pathos? No? Sit tight.

Originally pedalled as the three pillars of public speaking, these elements of Aristotle’s rhetoric tell us not only how to persuade people, but are also the tools that help us to determine the hows and whys of our own manipulation. People talk about using the three pillars in their fiction writing, in their public speaking, in journalism (surprise surprise), in essay writing… in just about any area of writing you can imagine. Rhetoric is, after all, the art of persuasion. And, as Wikipedia will also tell you, Aristotle’s Rhetoric is considered the most important work on this topic that you can find.

As an interesting aside, I’ll give you this to mull over:

…. Socrates, Plato and Aristotle saw rhetoric and poetry as tools that were too often used to manipulate others by trading on emotion and neglecting facts. They particularly accused the sophists, including Gorgias and Isocrates, of this. Plato, in particular, laid the blame for the arrest and death of Socrates at the feet of sophistical rhetoric. In stark contrast to the emotional rhetoric and poetry of the sophists was a rhetoric grounded in philosophy and the pursuit of knowledge or enlightenment. One of the most important contributions of Aristotle’s approach was that he identified rhetoric as one of the three key elements of philosophy, along with logic and dialectic. Indeed, the first line of the Rhetoric is “Rhetoric is the counterpoint of Dialectic.” Logic, to Aristotle, is the branch of philosophy concerned with reasoning to reach scientific certainty while dialectic and rhetoric are concerned with probability and thus are the branches of philosophy best suited to human affairs. Dialectic is a tool for philosophical debate; it is a means for skilled audiences to test probable knowledge in order to learn. Rhetoric is a tool for practical debate; it is a means for persuading a general audience using probable knowledge to resolve practical issues. Dialectic and rhetoric together create a partnership for a system of persuasion based on knowledge instead of manipulation of emotion.

~ taken from this wikipedia page

Out of all of that fun stuff, we find that Rhetoric was originally one branch of the discipline of philosophy, and that it was a ‘means for persuading a general audience using probable knowledge to resolve practical issues’.

Aristotle defined rhetoric as the ability to see the available means of persuasion.

I’m kind of going through these backwards, but following is a bit of a description of the three tools, ethos, logos, pathos.

Logos is reasoned argument, or ‘argument from reason’. It is reasoned discourse, the ability to speak with clarity, logic, and reasonableness. It is what makes you appear prepared, and knowledgeable. Logos may be data, facts, figures, or the construing of such. Whatever it is that logically makes you look like you know what you are saying.

Ethos is the most important of the three, which is why it is characteristically listed prior to the others. Ethos is an appeal to the honesty or authority of the speaker (or writer, or subject). While the persuader can provide a way into this, it is truly the audience that determines ethos. Drawing on ethos can be done in multiple ways:

Apply rhetoric to your writing

If you’re a fiction writer, then right about now you are wondering how the bloody hell this applies to you. It’s actually not that difficult.

If you are a character writer, then the way that you speak with authority and clarity about your character makes you know what you are talking about (logos).

If you know what you are doing, then your audience will identify with your character, either positively or negatively, and will be more willing to suspend their disbelief and follow your story (pathos).

And if you do the other two correctly, your apparent honesty and authority will appeal to your audience, making you as the writer disappear into the background – thus enabling greater engagement with your character (ethos).

See? Simple. It’s merely putting strange words on what you already do.

When most people hear the word rhetoric spoken aloud, they do not think of its original meaning, of persuasion. What they think of is its second meaning: pompous, bombastic writing. Which, let’s be honest, if the person peddling persuasion does it not with artfulness but instead with a bag of shit, is what you get.

Use rhetoric to deconstruct the media

Knowing how to create something also teaches you how to deconstruct it. It is occasionally more tricky, it may involve a little more work of your grey matter, but you have the skill to do it. Once you know the three elements of persuasion, you can work out whether or not you are being manipulated (persuaded) into taking a particular point of view.

If you’re reading news articles, then you also have to look at lexical semantics (or the meanings of words and word relations) – and pay particular attention to timbre or the tone of the language used. By adding this fourth element, which you would naturally come to via pathos, then you’re well armed to tackle the onslaught of information thrown at you by the media. And by any friends, workmates, or family who are already persuaded, and are thus regurgitating what they’ve seen or read.

Let’s try this out

This screen-grab is from the ABC’s article ACCC Flying Squad to Combat Carbon Rorts. I chose it on purpose, because of its title. 😛 Have a read: 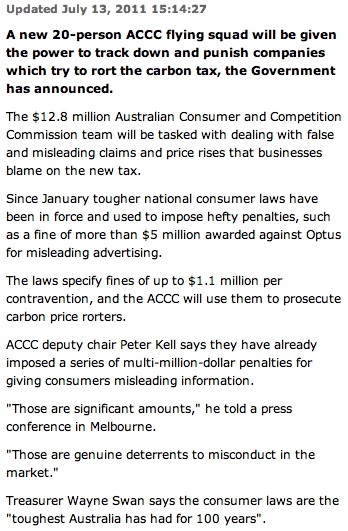 Moving into the body of the article, this image is reinforced by the use of language such as track down, punish, rort, false and misleading, force, laws… and so on. Already you’re feeling your pathos-strings pulled, aren’t you? It’s appealing to your sensibilities that companies who evade the law need to be dealt with, because at heart you’re an honest person. If you were being dishonest at such a level, you would expect to be dealt with… You see? Not only are your emotions engaged, but so is your imagination. Your sympathies are already siding with whatever argument this writer is proposing, and you’re not even thinking about it.

The logos in this article is in its structure, as it is in most persuasive texts. It has an introduction, it states some facts at the beginning, and it rolls on through other apparent facts that feed into the basic drive of the argument. When you get to the second and third paragraphs, however, do me a favour and pause. Now explain to me how misleading advertising and consumer laws are related to companies who flaunt carbon tax laws? You’re struggling, right? It seems ok, false and misleading claims appears to lead naturally into misleading advertising. The consumer laws appear to be related to carbon taxes. But, if we’re honest, it’s a really tenuous link.

This, then, is where the fact babble of logos can be used against an audience, to create a situation where the ‘facts’ persuade. But they needn’t be correct, or properly related, so long as it creates this effect in the audience’s mind.

There are a couple of reasons why you aren’t questioning the authority of the writer (ethos). The first is tone of the work. It is suitably journalistic, stitled, correct. Its short sentences are authoritative, and leave little room for questioning. But in the body of the piece it also draws on experts: it name-drops the ACCC, a body that all Australians aspire to complain to when companies don’t do their thing as they ought to. It pulls out a previous case, though tenuously related, against Optus (everybody has a beef against a telco, right?). It draws on some significant names: the deputy chair of the ACCC itself, and provision of quotes; and the Treasurer, Wayne Swan, and provision of quotes.  So why would you question the authority of this work, or its honestly? It quoted high-up people, from significant organisations.

But the important thing is to work out the goal of this piece. Its goal is to get you to agree with the notion that the carbon tax is a good idea. And the best way to do that is to pitch you against the faceless ‘large corporations’ who so often appear to screw us blind.

Has it told you anything useful? Anything new? Has it given you any information to enable you to make an informed decision on your own? Even though this is only a snippet, the answer (based on what is provided) is a resounding no. All it tells you is what the potential fines are, and what the potential taskforce will be that will enable distribution of those finds: a group of 20 people.

Everything else is a tool of the rhetoric, designed to help you think in a particular way.

I hope you enjoyed this little excursion into the art of persuasion. Please drop a comment and let me know what you think!