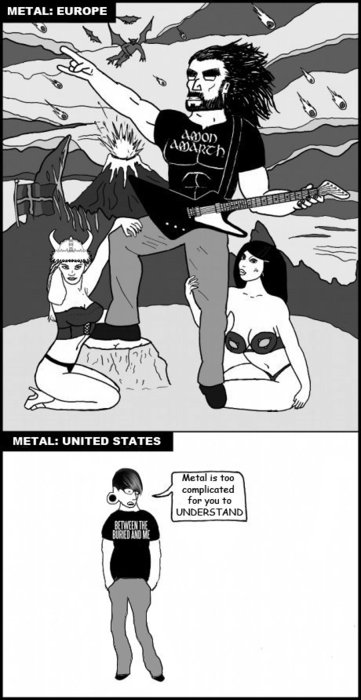 In an age where Web 2.0 and 24-hour news cycles rule, it means you have to shout the loudest to get heard. But that isn’t enough. You not only have to cut through mediocrity and noise, but you’re up against people with fingers resolutely placed in their ears. Rock magazines aren’t the sole proprietors of “What You Should Listen To, Inc.” any more. People have iPods, people have Tumblrs and people have Twitter. They don’t need your approval – they’re their own curators now. 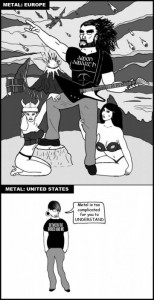 “Do critics have any special license to serve as pop music’s cultural interlocutors when anyone with an Internet connection can attempt to do the same thing? In other words: if anyone can make pop music and anyone can be a pop-music critic, do we really need professional critics to tell us what it all means?”

But never mind that – how do we get these metalheads attention? How do we make the scant amount of money to feed ourselves from such a profitless enterprise? We can’t be gatekeepers; we can’t tell them what’s good any more! We can’t even get them to buy the crap we peddle!

So let’s just piss them off.

Frank Lemke is now at the perihelion of the “Hipster metal writer” movement, penning an article panning Baroness’ almost universally acclaimed Blue Record with Decibel magazine claiming the new column promises “one brave soul sail[ing] against the current to inform all you clones why you can’t spell classic without ‘ass.'” I sure as shit hope they aren’t getting paid a dime for it.

Yes, the magazine is making fun of you. You’re paying $10 or more to be laughed at by the metal equivalent of your schoolyard tormentors. The twist is the once bullied is now exacting revenge on his fellow Slayer “meatheads” and the Iron Maiden “long-haired pansies.” They sport old man caps, 5-gauge tunnels in their ears and ironic images of Yoshi and Decepticons emblazoned across their arms.

They’re hipsters armed with BFAs, copies of Bukowski and Joy Division t-shirts, and they’re laughing at you.

By rattling a cage of vipers – knowing exactly what upsets them and what doesn’t – literate and intelligent metal writing ultimately loses. By consciously positioning themselves as privileged interlocutors, these journalists attempt to say “I know better than you” at every given opportunity. Fans are the real gatekeepers of metal and they aren’t as dumb as these rock writers think they are an they’re certainly undeserving of their contempt.

MetalSucks.net is at the vanguard of the hipster metal journalist revolution, soaking in all the pompous art school posturing they could muster from their $20,000 a year degrees in fine arts that their parents most likely paid for. Taking cues from the bible of hipsterism, VICE Magazine, they figured in order to cut through to a seemingly vapid and punch-drunk metal crowd you not only have to maintain a critical distance, you have to actively and almost passionately loathe the genre you cover. The dichotomy of “art” vs. “pop” collapsed a very long time ago and these hipsters are bemoaning 60 years of progress just so they can perch themselves on one rung above the rest of the metal-loving population. Is it so hard to accept that there’s artistic and technical merit in Hammerfall? Or that Kylesa stole some of their riffs from Weezer? That Eddie, despite being Maiden’s enduring gimmick, is actually fun to see as he terrorizes Steve and Bruce on stage? I mean, really?

MetalSucks lures one in with half-decent interviews and recycled tidbits from Blabbermouth.net but really go for the jugular by trolling their intended audience. They achieve this through asking stupid questions like “Should metal have melody in it” and producing ignorant lists of “greatest guitarists” only to pick the most obscure option because selecting what’s actually good is “too mainstream” and “non-controversial.” Are they winking or are they poking their tongue out and raising their middle finger at us? I believe it falls into the latter category. Can they just put on their thick-rimmed glasses they don’t need to see with, walk out of the scene and never come back?

I am all for controversy and breaking down groupthink, but metal was never and is never going to be a ruled by a herd mentality. There are too many fans with too many opinions on what’s good and what isn’t and I don’t think they deserve to be pilloried for liking whatever they seem to appreciate. Instead of critical appraisal, it’s just a ceaseless noise of “you’re an idiot for liking this” because they write for the magazine and you don’t. Instead of conceding the point that curatorship and gatekeeping is an impossible task in the digital era, they choose to incite conflict instead of exercise their creativity. The best rock writing, according to Robert Christgau, is that the writing about rock is an art form unto itself; but we aren’t seeing that any more. What we are seeing is deliberately provocative navel-gazing and keyboard warrior Internet tough-guy posturing.

Metal Mike Saunders, a rock journalist for The Rag in Australia said that “Most people listen to rock n’ roll. Yet others read about it and some actually have the lunacy to write about it!” but now I’m thinking that most people have to be prodded and cajoled into having their blood boiled and lifestyle mocked by a tiny cadre of hipsters that think they’re better than them.

But they’ve lost the point. We like metal for what it is. It’s not above criticism – no artistic product can be. But like the “metalhead comedian” Steve Hughes said: “We can laugh at metal – we know the stupid bits and some of the stupid bits, we like!”

There’s a dearth of intelligent, creative and down-to-earth rock writing and if you look hard enough, you can find it. But the more popular sites and mags get a kick out of watching your butt getting hurt but please – no more. The minute you start writing without having a contempt for me and my fellow metalheads will be the moment I take my fingers out of my ears.

Tom Valcanis is a freelance journalist, media consultant and metalhead from Melbourne, Australia. He did a thesis on rock and metal because he actually fucking likes it. He has 20/20 vision, wears Megadeth t-shirts and only has ink on him when his fountain pen leaks.