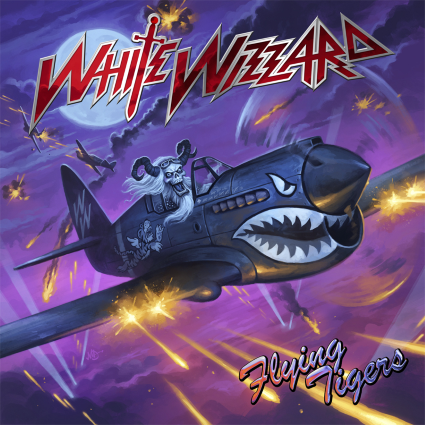 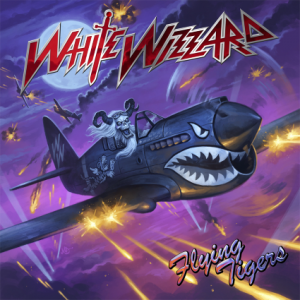 I get excited when I see a release from White Wizzard, and have done ever since their 2009 EP High Speed GTO hit my desk and simultaneously pressed all the right buttons.

So, when Earache threw Flying Tigers my way, I did a little bit of a happy dance even before I’d heard it. In the past few years Earache have hit gold with some of the classic metal releases, with these guys, and also notably with the Canadians Cauldron.

Flying Tigers is quite lengthy: a full hour, in fact. It is a bit of a journey this time. You get your rockin’, riff-driven metal aplenty, with the standout moment in this regard being (for me, anyway), towards the end of Demons and Diamonds, which is the ninth track on the album. And the intro track, Fight to the Death is an instant sing-fest. The next time I’m out getting drunk, I fully expect to be able to warble along to it, beer in one hand, the other with fist raised.

The melodies on this album are powerful. Michael Gremio’s vocals are as powerful, strong, clear and full of range as ever. The guitar work – especially the dual harmonies – by Lewis Stephens and Cory Nagatoshi is excellent, the hard, feel-filled drumming underpins the attitude that comes through, and the production is nearly faultless. I say ‘nearly’ in relation to the production, because I’ve not heard it on a CD or LP, merely on an MP3. I’m biased against MP3s. As good as they are, you just can’t get full measure of a release until it’s on a good stereo.

Flying Tigers is an interesting release. It’s hard and rockin’, but it also features some nice ballad work, like Starchild. The other track worthy of note is Dark Alien Overture: a track that features some very nicely written and performed instrumental sections. Dark Alien Overture draws on harmonic progressions of early masters like Black Sabbath; which, woven into the White Wizzard sound is full of win.

Like many other bands producing music now, and like the ages-old arguments about art reflecting the politics, society and life of a point in time, Flying Tigers addresses the hot issue of the New World Order, and supposed related histories. With track titles like Blood on the Pyramids, Fall of Atlantis, and an apparent focus on space (Starchild, War of the Worlds, Starman’s Son), it will be almost immediately apparent to those schooled in the issue. And Dark Alien Overture talks about kings and queens waging war, and the New World Order being at hand. I wish I had the lyrics for this release, but alas it is not the case. I’d love to be able to prove my point more fully and accurately. Any rendition I provide of lyrical content is bound to be amiss!

But this is all beside the point to some extent.

If you’re a fan of classic metal, do yourself a favour and go score this release when it comes out. White Wizzard is yet to disappoint me, and if you’re a fan of the genre, you’ll spend your money wisely if you buy this album.

WHITE WIZZARD’s Flying Tigers is out on 19 September 2011, on Earache Records.