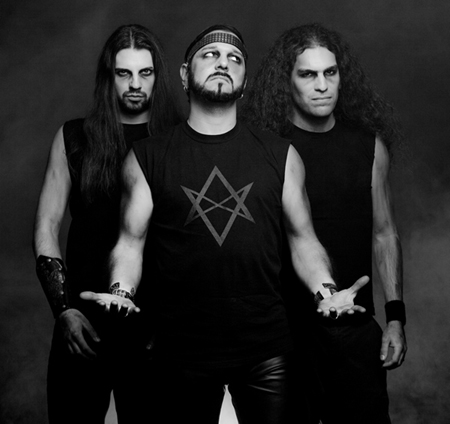 Australian audiences will be treated to four special shows on this upcoming tour; one each in Brisbane, Sydney, Melbourne and Hobart. ABSUwill bring support from two of the country’s most devastating acts — Brisbane’s purveyors of spectral damnation, Portal, and Tasmanian dark legion, Ruins — making it an incredibly extreme, not-to-be-missed tour package for any fan of dark metal residing on the continent.

ABSU’s sixth full-length, Abzu, was officially released this week via Candlelight Records. As with every album in their lineage, Abzu takes the band’s signature occult blackthrash mythology to dark new calculating territories through a whirlwind of razor-sharp riffage and some of the extreme metal world’s most top-notch drumming. The second part of an ongoing trilogy of albums, which began with 2009’s acclaimed Absu, and will eventually come to a finale with Apsu, Abzu was recorded at Nomad Recording Studios in Carrollton, Texas, and finds drummer/vocalist Proscriptor and bassist/vocalist Ezezu sharing equal vocal duties and debuts the skills of new guitarist Vis Crom. The record was mixed by J.T. Longoria (King Diamond/Solitude Aeternus), and features original cover art from Polish artist Zbigniew Bielak (Watain, Behemoth, Destroyer 666, Vader).