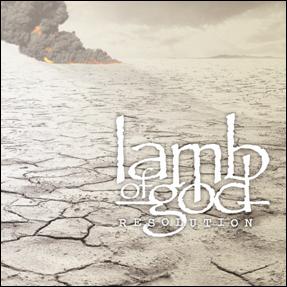 “There are metal bands and there’s Lamb Of God” … “In 2012, Lamb of God remain the pre-eminent metal band and not by default”… “Everyone else is left to watch and marvel, and choke on their dust”. This is just a random selection of quotes from the enclosed biography for Resolution, the latest LAMB OF GOD album. Talk about bloated mindless PR banter.

On to the music then. Wrath, the previous LOG album, left me pretty cold. It was aggressive and full of the usual vim and vigour, but the lack of dynamics and depth made it a fairly one-dimensional listening adventure. This time around, the guys from Richmond decided on a slightly more varied and experimental approach, just as they did on Sacrament. Don’t expect any frolics in vein of King Crimson, Cynic or Mastodon, but just enough nifty details to keep the music fresh and exciting.

The doom metal references in “Straight For The Sun”, the blues/southern rock-styled intro of “Ghost Walking”, the creepy atmosphere on “The Number Six” and the accentuated bass-lines in “Invictus” are all examples of why Resolution has more to offer than its rather one-dimensional predecesor. The punk rock oannotations on “Cheated” and the use of female opera vocals on “King Me” are further indications that Blyth and Co aren’t afraid to look past their musical boundaries from time to time. Don’t worry, Resolution still has enough typical LOG stompers to offer in the form of “Desolation”, “Guilty”, “Insurrection” and “Terminally Unique”.

The wolverine-styled vocals by Randy Blythe and the impeccable drumming by Chris Adler are once again the main attractions. Mark Morton and Willie Adler still showcase their guitar prowess from time to time, but it doesn’t get quite to the level of Ashes In Their Wake or Sacrament. A shame really. Another point of critique is the relatively long length of the album. With fourteen(!) tracks covering almost an hour worth of music it takes a lot from the attention span of the listener, especially with this type of engaging and ferocious style of metal. Perhaps cutting back to 45 or 50 minutes would have been a smarter idea.

Despite this, I do consider Resolution to be one of the finer moments in the LOG catalogue. It showcases enough new elements to keep the album fresh and exciting, yet retains the trademark aggression and blue collar working ethic to keep the core fan-base happy.

Whether this album justifies the ridiculously bloated statements in the PR material remains to be seen. Regardless, Blythe and Co are still the real deal and Resolution is a clear sign that they won’t slow down any time soon.

Raymond is an occasional contributor and guest blogger here. He heads up the Dutch magazine Alternative Matter, which is growing in leaps and bounds and makes me all excited about the future of rock journalism. You can find him on Twitter @HomeNucleonics.