[commuter review] ORANGE GOBLIN – A Eulogy for the Damned (Candlelight) 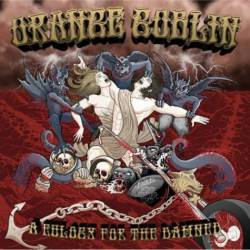 Orange Goblin’s A Eulogy for the Damned is your cool cruise into and out of work.

Heavily blues-driven, phat stoner rock, this foray into Orange Goblin (which, I’ll be honest, is my first taste of their work, can you believe it omg! Their discog is here. Shame! Shame!) is one way of injecting some chilled out rock into your day.

This album is a grower. Not in a “creeper” sense, but in a fast, grab onto your gonads before you quite realise what’s happened kind of way. By that, I mean that I wasn’t totally absorbed by this album until track five, which is exactly halfway through. From tracks five to ten you find yourself hoping that (a) it won’t end, and (b) you can just stay on the train for the return journey home, and seriously, fuck going to work.

The reason why the first part of A Eulogy for the Damned didn’t really get into my skin was because I was in a state of mind where I fully resented having to go to work. In this frame of mind it bored me. Shitless. I was impatient for it to get fucking moving.

Then all of a sudden I slipped into a mode of WOW THIS IS AWESOME. Suddenly I didn’t care that I was a lowly paid chump. I couldn’t give a shit that I was facing a ten-hour working day. I was way cooler than every one of these cats swarming their way towards the train station exit.

That feeling stayed with me all day.

And on the way home, it was the perfect accompaniment for that very same chill-out factor. I just wished I’d had a beer with me.

Orange Goblin have produced a killer album. It’s excellently paced, damn near perfectly produced, the riffs are engaging – even sexy – and if you read my work, you know that I love a sexy riff.

People might consider them psychedelic doomy stonery whatever but (from this album, remember I have yet to venture into their back-catalogue) it’s just outstanding rock with blues sensibilities and – of course – an appreciation of the early masters of proto-metal. It’s heavy, it has balls, it appreciates a melody and a good riff.

For a while the vocalist gave me the shits. Seriously, dude, change your mode and your tone on occasion! But eventually I didn’t mind. Who really cares when there is so much more going on.

As far as commuting goes, it’s short enough that you can enjoy it twice in a day. And if you had it shuffled in between a whole bunch of other stuff, it’d go down as that killer reprieve that makes you wish you just listened to that whole album instead.

Bloody nice work, in short. Highly recommended. I was rocking out at the traffic lights and didn’t give a fuck that everyone else looked like they wanted to kill themselves.

ORANGE GOBLIN’s A EULOGY FOR THE DAMNED IS IN STORES NOW.