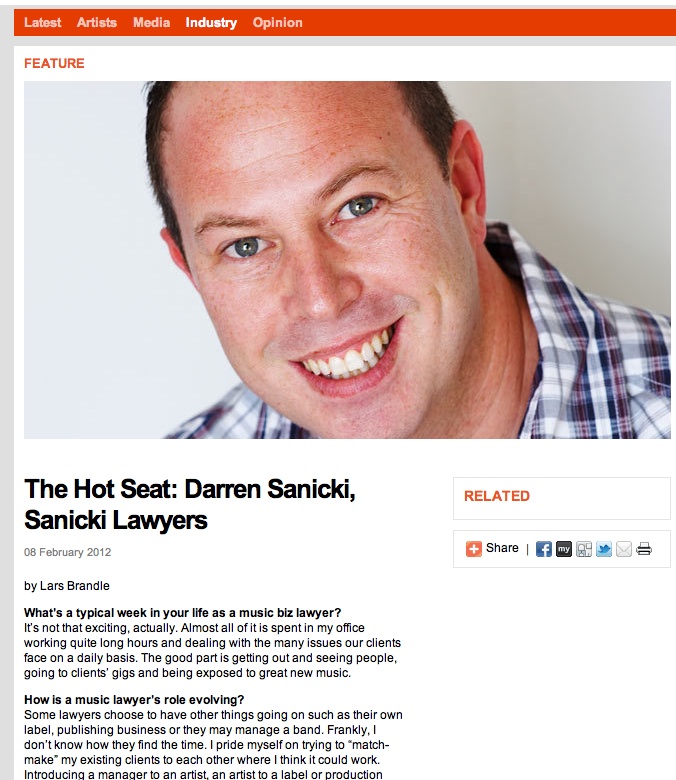 I love seeing articles like this, not least because it shows people the sides of the industry that people forget about. The back-end side: the lawyers, the managers, the people who deal with contracts and advise bands. It’s rare. When I was running the show at Metal as Fuck I started the Industry section for the very reason that it is rare to see this type of info.

Not only is it rare, but for young bands, those keen to get into the industry, and for people in affiliate roles, the information is essential.

For music journalists and publicists, it is absolutely worthwhile being across things like this. It gives you a heads-up on issues that you might not have considered. Knowing them expands your general knowledge, and helps you more greatly understand an artist or band. And what helps you most with interviews? General knowledge of the industry. No point asking stupid questions, you just look like a retard.

Besides which, the first thing you need to do when you start taking your act seriously, is to get a lawyer. Fuck marketing, fuck publicity, fuck management, get your legals sorted first. Of course, if your manager is also a lawyer, then bonus!

Below is a sample. Click here to read the full article. Trust me, it’s worth it. I’ve already sent it on to all the bands that I represent.

The trail to today’s music biz is paved by artists who were ripped off. Are there still contracts out there which can, well, bind an artist in servitude?
The really scary contracts are usually those found online or from a foreign country where you often have no idea who you’re even dealing with. The online environment makes it a lot easier to be “discovered” by someone from overseas but some of the contracts that follow are pretty rough. In Australia, I don’t see many contracts which are blatantly ripping off artists; but there are certainly some harsh ones out there. The key is to get advice and know what you’re getting into.

You’ve served as legal rep for contestants on TV talent showsAustralian Idol, X-Factor and Australia’s Got Talent. What did you learn from the experience?
Legally – and despite popular opinion – the whole thing is relatively standard. The first thing I always notice working with the contestants is how young many of them are. Most of them have very little, if any, experience in the music industry and rely on you to explain how everything works. It’s usually such a crazy time for contestants leading up to these shows that the “legals” are really of least importance to them. Unfortunately, some contestants think that this new and exciting life they’re suddenly leading is how their lives are going to be from now on. Many contestants come down to earth with a huge thud once these shows end. It can be really hard for them. There are some who remain grounded and focused during and after the process, using it as a stepping-stone for bigger and better things. The clever ones use it perfectly.

When bands split, the dispute over ownership of the songs and recordings often becomes bloody. Any advice?
My message to bands is, work out songwriting ownership splits in advance. Having played in bands and written songs myself, I know it can be an awkward conversation to have. It doesn’t have to be. If you’re getting together with one or more people for the purposes of “writing”, I suggest to agree that whatever is written will be owned by the writers in equal shares. The alternative is going back over the song at the end and working out what percentage of the music and lyrics were written by each member — almost an impossible exercise. With recordings, work out who will pay and how will those who have paid get their money back. After that, the splits should usually be even amongst the band and generally should apply to a member even if they subsequently depart the band.

What do you think? Valuable advice huh?