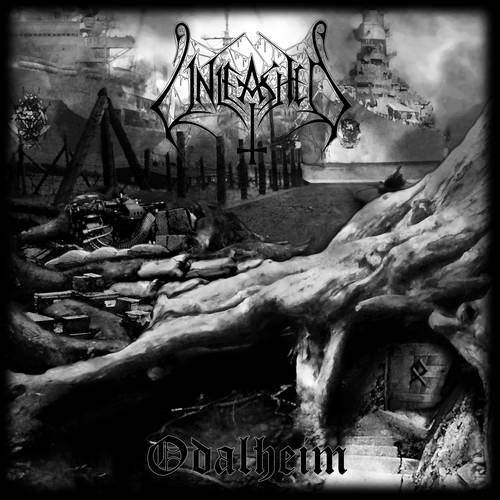 I promised reviews of this album yonks ago. It was never forthcoming because i had to listen to the album heaps before I even attempted to review it. My initial reaction to the released waved red flags in front of me. Flags that said: “hang on, this is a grower”. I’m glad I waited to do anything with it, because my instinct was right. Odalheim is a grower.

And I say this knowing that my initial reaction to the album was this: The unique style of Unleashed has the ability to do one of two things to you. One: bore you. Two: make you feel at home.

Odalheim presents me with an interesting dilemma. On the one hand, it is a progression for UNLEASHED in terms of some of the ways in which it’s melody is handled. On the other hand, it’s opening track, Fimbulwinter, reminds me very much of prior Unleashed albums, esp Hammer Battalion and As Yggdrasil Trembles.

And yet, having said that, this album grows in intensity to the point where you, as a listener, are part of its stories, and part of the experience. This may well be a cheesy comment, but it is true. It’s very difficult not to get yourself entwined with this release, and it comes down to the way in which the songs – and the album itself – are structured. It follows a classic (as in, music generally) structure of building to a crescendo and tapering off appropriately.

It is a brilliant thing that Unleashed’s work is very often released during the Australian winter. I sat at the train station with Odalheim blasting in my ears, not long after 6 am. It was dark, freezing fucking cold, the train was murderously late (seriously, I could have driven my car into the city in the time it took the first train to arrive… late), and I was in a mood that was getting progressively darker. Hence my commentary about Fimbulwinter. I’ve heard these riffs before, guys, thanks heaps.

But wow that reaction is unfair.

Like the great storytellers that they are, Unleashed have taken care with the writing and structure of this release. It takes a while for you to realise that you have been grabbed by balls, that you’re firmly in thrall, and that you and Odalheim are the only two things on earth that matter.

This is even the case if you’re too cold, on a shitty train, and facing a whole day of work that you don’t really care about.

Even better is that this album is quite long. It runs for 43 minutes. So, as a commuter, I could rock out not just through long delays, but also for an entire train ride, and all the way to work.

By the time I actually got to work, I was in a kind of Nothing-Can-Fuck-With-Me mood. Strength given by the gods of the North? Most likely. It is actually one of the best releases to listen to first thing in the morning.

I have listened to Odalheim so much now, that, not having heard it for a week or two, I could still sing along to the album. It’s gotten under my skin so much that I rank it a lot higher than many of their previous works. It is triumphant. Nice work, Unleashed.

UNLEASHED’s odalheim is out now on Nuclear Blast Records.