Snake Bite is a good read. Its topics and themes are universal, which is why the story works so well. It does, however, have failings. Read on to see why. 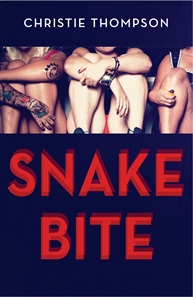 Snake Bite, the new work from Canberra-based writer Christie Thompson, sounds like a gritty, maybe disturbing, urban Teenage Angst book. This book is strikingly good in its characterisation; and yet it is precisely that characterisation that causes its downfall.

Snake Bite is seen through the eyes of Jez (Jessica) a seventeen-year-old, bored, white trash kid living in the suburbs of Canberra. She has an alcoholic mum, and her best mate, Lukey, has an aggressive, violent brother and a particularly distant father. One day, in a piercing studio, enter Laura, a rather posh-seeming contemporary kid from Melbourne, who has lesbian mums. Her dad was Mr Sperm.

This entry of Laura, at the end of Jez’s Year 11 school year is the point at which Jez’s life seems to be thrown for six. Lukey thinks that Laura is pretty good, which upsets Jez – who has feelings for Luke that she’d been trying to deny herself. Or maybe that she hadn’t realised, given they’d been friends since the age of thirteen. Jez’s next-door neighbour is Casey, an 18-year-old stripper, a girl who finds her confidence through sex, and can’t see that she is really just a slut.

Throughout the book, Jez battles her feelings for Lukey, realised only through his interest in Laura; she battles her sense of friendship, and tries to establish for herself what meaningful friendships actually are; she begins her sexual journey, prodded along by Laura’s sexual confidence (despite her pudginess), Luke’s burgeoning sexual interest in Laura, and Casey’s prominent and pronounced (and pushy!) sexuality. At this point in her life, Jez is evaluating where she is, where she wants to be, and is trying to deal with her mum: an alcoholic 33-year-old, who is trying to recapture her youth, trying to recapture her own sense of self, and trying at the same time to maintain a job, be a mum to a girl who has high expectations of what “mum” should be, and who is trying to have her own life, her own romances, her own sexuality.

Jez’s mum (and the women with whom mum interacts) is painted as a spectacular failure, which is a hallmark of how Jez herself sees her mum. Reading this book I felt age twinges. I’m thirty-three, the same age as Jez’s mum. Lots of my friends have kids, lots of my friends hold down shitty jobs, and get massively drunk on the weekends. I’m a metal-head, it’s the culture… but what does that say about me and my social circle? Hm.

Surprisingly, I got into this book. However, it took me a long time to lose myself in it. By “long time”, I’m talking three-quarters of the way into the book. Snake Bite got hold of me early on: I really wanted to keep reading it. In fact, I read it in two and a half sittings! Wow! But I wasn’t lost in Jez’s world until the pace started to pick itself up, and Thompson’s confidence in her characters grew strong enough to allow them to roam along without her. Until that point, I could see the author in the work, pushing them along.

And quite frankly, that sucks.

The other thing that distanced me from this book was the language. Am I really so old? Already? Am I so distanced from Da Yoof of Today that the language barrier was such a problem that I wasn’t reading it seamlessly until halfway through the book? And also, should Thompson be worried that the specificity of her contemporary tone will date the book within less than five years?

The answer to all the foregoing questions is a resounding Yes.

I see the abbreviation “OTT” and I think “Off The Topic”. Actually, it’s “Over The Top”, which I struggled to get to. Seriously. It stopped me reading. The blend of bogan Australiana and contemporary speak was a huge problem for me. It is such a problem that I became really frustrated.

Once I’d settled down and considered things a while, I was able to pinpoint the root of my frustrations. These are that the language feels painted on, it’s clearly not native to Thompson. That makes it feel condescending. The second is that the same, beautiful, urban realism can be created without such a density of contemporary language failures. The characters largely drive themselves, the struggles would be the same, it would just be less of a stumbling block for the reader.

That’s if your reader is a 33-year-old woman, or you want the book to have a greater longevity. I might appear to be being picky, but this book will age really quickly, and that bugs me heaps. Classic tales need a lifespan, which this book will be denied because of its language.

I’m concerned about the nature of Snake Bite’s longevity because I really like this book. It made me realise that nothing’s really changed since I was a teenager. Except, my version took place in a country town, everybody’s parents were still together (and pretty well off, at that!). None of us was from a dysfunctional, bogan family. Well, a couple were dysfunctional, but certainly not bogan.

We ran around at night in each other’s towns, smoking cones, having Deep & Meaningful conversations about life and the world, philosophising about things that affected us; we listened to metal, got smashed, and generally speaking went through nearly everything that is in this book.

Except, we were in the bush; pills weren’t a thing, hard drugs were looked down upon as being particularly bogan, and we had none of the sense of class gap that cities tend to create. We knew the bogans. There were tracts of them that had been moved out of Melbourne to our town, where there were even less jobs, and even fewer opportunities. We stayed the fuck away because they were violent: they’d stab each other, get into huge fights, smash things. Everyone in the town stayed away from the ghetto streets.

And so, that side of Jez’s life is alien to me. The side of her that yearns for love, and solid friendships, to know herself and her direction, whilst simultaneously striving for a better life – which is always somewhere else, somewhere away from home – is familiar to me. Jez’s alienation, and sense of a whole society of fuckups, is familiar to me. Perhaps there is not much difference between being a teenager of the 1990s and being a teenager of the 2010s? How has life not moved on in twenty years? How is it that this sense of isolated helplessness, in a society that couldn’t give two shits, is the same?

But while all of these things are familiar to me, so is the recapturing of what Home means, the rekindling of Jez’s relationship with her mother. The difference, is that it took me until I was nearly 30 to work this out. It’s the only thing that seems truly false to me (besides some of the painted-in language). How is Jez, at 17, so incredibly self-reflective, caring, able to learn from herself and the mistakes of others, and, ultimately, become so forgiving? In what, three months? She did all this in one summer?

Wow. I fell out with my family due to relationships, I was the odd-ball from when I was about 14, and I didn’t resolve a lot of my family dramas, or realise what Amazing Rocks they all are, until I had huge things go down in my late 20s. Does that make me a failure? Or just a slow learner? Neither; it makes Jez a little bit unrealistic. Or incredibly precocious, which, given her circumstances, is unlikely.

Either way, the resolution seemed to occur fairly quickly and easily, even though Jez went through pain to get there. Granted, things happened quickly, and so the resolution timeframes were fair enough.

Also, towards that resolution, this book moved me to tears. I will not tell you what happens, because then I would be The Critic That Spoiled The Book For Everyone Else. Suffice it to say, I had moist eyes.

It’s refreshing to read such quality Australian fiction. So many of the urban tales I’ve read in my life have been British, so it’s kind of odd to see the Aussie white trash written about in a similar style. The familiarity of it all makes it feel not at all exotic or driven into the mud; and therefore, it’s almost bland. The blandness is, however, a measure of the urban environment in which these kids were growing up, too. Canberra isn’t exactly known for being an exciting town.

Ultimately, Snake Bite is a good read. The topics and themes dealt with by the characters are universal themes, which is why the story works so well. If you’re in your teenaged years, please please go buy this book, read it, and let me know what you think. If you grew up in the ‘90s like I did, I’m betting that the grunger in you, or the metalhead in you, will identify fairly easily with the protagonist.

Oh, and the warnings about this book being full of drugs and sex and adult themes? Who cares, man. I didn’t notice it. It’s not gratuitous: it’s normal. Also, it maybe says more about me than these themes say about the writer, the story, or the characters. Those grown-ups who believe that children aren’t smoking, popping pingers, smoking weed, and getting drunk when out of parental sight, need to take a big dose of Reality. If you’re offended by it, just don’t bother. Put your blinkers back on and go to church instead.

Snake Bite will hit stores on 24 July 2013; at which point I will be launching a competition for you to win copies!! Stay tuned.

In the mean time, click here to check out other Allen & Unwin titles that you might dig.