[Book Review] Getting Up, by SD Thorpe (Pan Macmillan)

This latest work by Australian writer SD Thorpe, Getting Up, is a coming of age story with real roots. It’s connected, beautifully written, & nicely characterised. 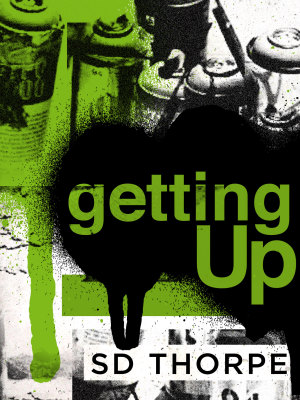 This latest work by Australian writer SD Thorpe, Getting Up, is a coming of age story with real roots. It’s connected, beautifully written, nicely characterised, and aside from some music timing faux pas, is an excellent book.

This story isn’t about Roket trying to fit in with the right people at school; it’s about being a young person who could or should know better, trying to find his feet in the world. Fitting in is still a ‘thing’ in this new coming-of-age work, but it’s less about becoming one of the many, and more about becoming who you are, and navigating the world’s expectations at the same time.

This book was pretty good, I have to say; high praise indeed. I read it in a few hours. I read the Kindle version, and I don’t understand the pointless scraps of pictures in it, but maybe that’s just me. I think including pictures for the sake of it – which is what this seems like – is a bit silly. They didn’t add anything; they just made me wonder who the hell decided to include them.

Unlike the other coming of age book I have recently read – click here for that review – this one felt real to me. It felt like it had roots: the place was so much a part of the characters; the characters were so much a part of each other. I felt like SD Thorpe had run with crews and punks for years, and if she hasn’t, then by fuck she’s got some fantastic observation skills.

The way that Getting Up is written makes the language invisible. It could’ve done with more swearing. But maybe that’s the publisher’s intervention? Perhaps the author can enlighten me. Roket was too clean, or something. He felt more like a 14-year-old than a 16-year-old.

The nature of punks was perfect; the time it was set in was marked by really silly obvious things, which annoyed me – but which got that whole ‘timing’ thing out of the way fairly quickly. Things like, the Berlin Wall coming down. I remember that, really well. I was nine. It was 1989. I watched it on the telly, lying on the loungeroom floor in shorts and t-shirt, and watching these ecstatic Germans breaking the wall apart, in the snow. All of the detail was perfect.

The timing pointers did, however, make me go back and fact-check the author, too, on the timing of some albums of which I was doubtful. For example: the book is 1989, and the author references Green Day’s debut album 39/Smooth… the chances of a shy, not particularly well connected 16-year-old in Melbourne having this in its release year are slim, at best.

But it’s ok, the timing was out. That debut album didn’t hit the world until April 1990.

Roket’s story is all the better for how tightly it’s presented (music faux pas aside). It’s not just a friendship battle. It’s that, plus dealing with potentially being branded a killer by accident and fate, plus other elements of criminal activity. And then there are all of those bigger questions: is it worthwhile going back to school? If you are talented, why do you need training, and isn’t talent good enough? Why be a grown-up at all, when every grownup around you is a fuckup, a fuckwit, or just goddamned hopeless.

This is an excellent work, and I encourage you to get your hands on it, and spend a lazy Sunday indulging yourself, as I did. It’s well worth your time.

5 thoughts on “[Book Review] Getting Up, by SD Thorpe (Pan Macmillan)”