Being a leader is great, until it isn’t.

Being a leader is great. Until it isn’t any more. This gap is not something that you will often find in the business press, but you need to know it exists. 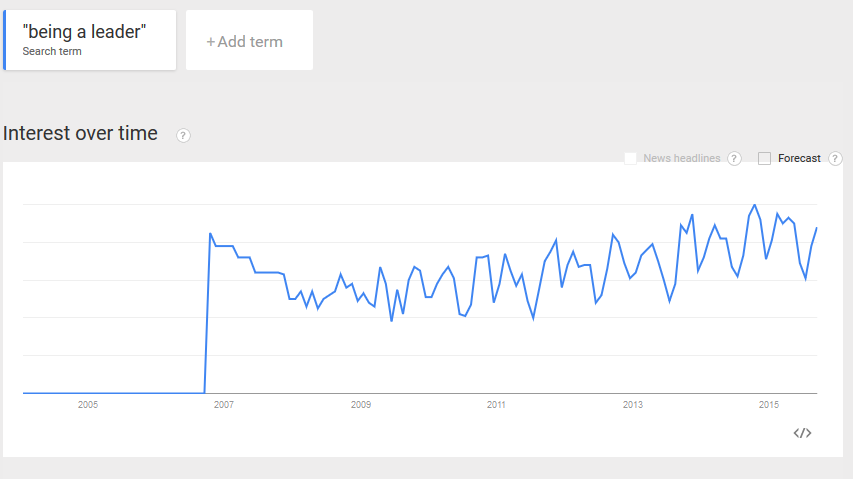 Leadership is a topic that is always relevant in business articles and related press. From personal experience, I can tell you that being a leader is great. Until it isn’t any more.

That gap is not something that you will often find in the press, however.

According to Google trends, the topic of being a leader is rising. You can see its trend here:

Leadership itself is paling in comparison, but the experience of being a leader is sought after.

Being a leader isn’t all sunshine and skittles

As someone who has been what I guess people would consider a natural leader – i.e. the person who seems to be naturally able to herd cats, and have been able to ever since childhood – the prospect of being in an actual leadership position really sang to me. It was a song of responsibility, action, forthrightness, ethics, and (somewhere along the line) better pay.

But if I were going to be completely honest with you, my most significant leadership moments have been those that have not been paid, rewarded, recognised, or even formally established. Even when you find yourself in a leadership position somewhere, it’s rare that you are able to enact significant change. Usually, you end up in a role where you are just able to see bureaucracy more clearly. Suddenly you understand why change hasn’t happened quickly (or at all): You can see much more of the rope. And often it’s in knots.

If you are able to establish something in which you become a leader because you own it, or found it, or are involved at the pointy end, chances are you will toil away with very little reward. And if you’re driven by money or recognition, then this entire time will for you become one big personal fail.

While I worked as a low-level leader in a corporation, I had minions who really wanted to rise to leadership roles. I remember two of them vying for leadership positions. One was motivated entirely by selfish and monetary interest. The other was motivated entirely by a desire to better his environment. Guess which one was promoted first? Yup, the latter. And this might be difficult to understand for people who have never held leadership roles but desire them. The truth is, real leaders aren’t motivated by their own desires. They (hopefully) get paid for the skills they bring to the situation of helping others.

And of dealing with difficulty.

You see, the motivated-by-money person will not deal clearly with difficulty. They will tend to run the hell away from it, ignore it, or otherwise deal less-than-optimally with difficult things, because they have no framework with which to support themselves.

The truth is, sometimes you have to be a cunt

Being a leader is some of the time about awesome things: Great people, great relationships, great fun, feeling like shit is coming together. That part of it is the part that rings your bell, gets you up in the morning, makes you stay in a shitty job.

But at least half of the time it’s feeling like you’re either piggy in the middle, or just flat-out being a cunt. In my time in leadership, I have:

Making decisions and driving things forwards is something you have to do. And some people really fucking hate it. Sometimes, just giving people a task to do, and putting a deadline on it, is enough to cause strife. But if you don’t do it, then nothing happens.

In startups, the appointed leader needs to do the hard stuff

This is why you should only appoint a leader if they are someone that you can follow, someone that you can work with, talk to, have difficult conversations with. If they’re someone you don’t feel a need to compete with, outdo, or otherwise try to knock off the perch. Because if you’re a founder, and your structure has a co-founding leader at the pointy end, then you have to give away some of your right to do everything in a flat structure.

Leaders in startups have a harder time than most, one could argue. They are the ones on whom all decisions eventually devolve. They need to be able to listen to a bunch of ideas, evaluate them, and then make a strategic decision that moves everything forwards. And they have to be graceful when feedback on their leadership style comes back to them. Just don’t begrudge them if you don’t work and suddenly you feel the sting of a whip on your backside.

If you’re not sure what constitutes ‘greatness’, I encourage you to read The Science of Being Great by Wallace D. Wattles. A pretty good summary is:

Great leaders work hard on themselves – and they work hard to make themselves redundant. Being a leader isn’t something you should aspire to and then hope to retain forever. In an ideal situation, you work so well on yourself and the people that you lead that eventually your services as a leader are unnecessary.

What do you do when being a leader stops being great? Persist

This is why, when you are faced with a giant wall that feels too hard to surmount, you have to go and find the crane that will leverage you over it. It’s easy to get stymied. It’s easy to stop yourself dealing with difficult things. It’s easy to avoid difficult situations, hard conversations, horrible issues. But the truth is, avoidance will just make you unwell: Sick in mind and then in body.

If you find yourself in a position where being a leader is more like trudging through a moat full of cow shit than sliding happily over a rainbow, chin up. All of us have been there. And sometimes the only way to get to the rainbow is to wear your shit-splattered boots with pride.

3 thoughts on “Being a leader is great, until it isn’t.”