[BOOK REVIEW] Kafka on the Shore, by Haruki Murakami (Vintage)

The true value in this work is the author’s ability to hold onto your soul and show it some truths about the world, such that you won’t be the same afterwards. 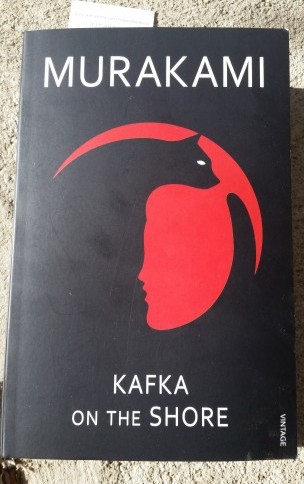 Kafka on the Shore by Haruki Murakami
My rating: 5 of 5 stars

It’s very rare that I read a book that deserves five stars. In fact, I avoid five-star rating wherever possible, because nothing is ever perfect, and full ratings give the mistaken impression that perfection is possible.

But actually, I can find little fault with this work, other than the feeling 2/3 of the way through that the author struggled with the segue from one part of the work to another. And that is nothing to do with the prose or the execution, but in the style. One can hardly fault an author for his or her style, unless it gets in the way of the reading – and that is not the case.

As a reader, I am unashamedly late to the Haruki Murakami camp. But that is not to say that I haven’t been thinking about it. For a great number of months – perhaps even a year – I had been drawn to Murakami’s titles in bookstores, as though the universe was whispering to me, these are profound and important works. Each time, I assessed that the time wasn’t right, that other works (works that I still haven’t read, mind you) were more important. Then, just over two weeks ago, I bought this book and started it immediately.

Murakami’s title, Kafka on the Shore is a gently handled allegory about needing to go to the edge of your own reality in order to find out that the purpose of life is to live it. We join fifteen-year-old Kafka Tamura in his journey from runaway to enlightened. At the same time, we meet a whole lot of other people who are in some sense existing in a wiser place, living as they do on the edge of worlds. Oshima, on the edge of genders. Mr Nakata, half of this world and half not. Hoshino, who allows himself to slide between one reality and grow and adapt into a new one. And Miss Saeki whose life has forced her to exist in the past more than in the present.

This work is a deeply philosophical exploration. For those of you familiar with Zen and Buddhist philosophies, much of the flavour of this text will add to your understanding of those works. And while I understand that Franz Kafka’s works deal with similar themes, of alienation and family conflict, I can’t comment: My collection of Kafka is as-yet unread. An oversight, perhaps.

There is much in Murakami’s works on which to ponder, chew, and ruminate. Like all remarkable works, it is a difficult parting: The bells of its song resonate long after the final page is turned. Perhaps that, too, is part of the lesson entangled in its prose.

Other critics have named this work ‘magical’, ‘thrilling’, that it has a ‘snappy plot’. And they’ve all missed the point. The true value in this work is the author’s ability to hold onto your soul and show it some truths about the world, such that you won’t be the same afterwards. Perhaps The Times was right to call it ‘hypnotic’ and ‘spellbinding’. For the conscious reader, this book is one to run towards, and thence to study.