This book brings together important and necessary information, and for that reason is quite valuable. But its construction and narrative totally lets it down. Read on to find out why » » 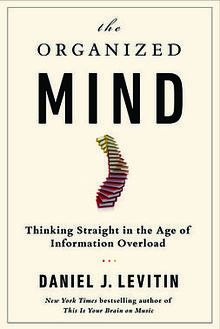 The Organized Mind: Thinking Straight in the Age of Information Overload by Daniel J. Levitin
My rating: 2 of 5 stars

This book came to be in my possession as it had been recommended, or referred to, by a series of authors whose books I’d read in the past six months. It’s also one of the lowest ratings I’ve given in a while. If you’ve read any of my critique (in any art form), you’ll know how much I despise ratings, because of the false impressions they can create.

If you replied yes, yes, yes, then you will love this work.

Levitin’s book is a very interesting read. It covers a lot of ground: From neuroscience to mathematical probability; from behaviours, attitudes, and effects of online and fast-paced information acquisition, to important skills required to raise children. And it includes some fantastic work on how we actually do organise information: Like with like, purpose with purpose, accessible and visible versus hidden and filed.

This is not a fast read, and nor is is one that will allow you to acquire information without also asking you to read a high number of examples and cases that illustrate a given point. These examples and cases are simultaneously worthwhile and boring. For this particular reader, there are only so many times you need to iterate a point.

And the iteration became a problem as the book went on. Points were repeated many times; this is likely for two reasons: The first, to refresh your memory as to the information you’ve read through; the second, because it’s written by an academic no doubt used to the particularly reiterative style common to the academy. Yet the reiteration seemed to demonstrate the author wavering. Levitin would drive in hard to make a point, and then lose it (and himself) in the process of providing a vast number of examples, fully and beautifully explained, but at the cost of the point of the section, or the momentum of the narrative, or even – perhaps sinfully! – to the detriment of the overall point of the book.

The result is that I actually did skip a large number of examples. Bored, tired of reading the same point over and over again, and trying to rediscover the thread of the narrative.

Perhaps because the field of study is so large, this author could have benefited significantly from a far more comprehensive use of notes (foot- and end-notes) by which to illustrate the argument. It would have served to better connect the narrative, drive the book forwards, and still allow the reader the choice of reading the additional information.

As Levitin himself points out in this work, the best way for someone to access, recall and assess information is to give them less of it, and in a way in which they are in control. The time-honoured use of end- and foot-notes does precisely that. However, it could also be a problem not with the author, but with an inexperienced or young editor, who has never had to really consider the reader at hand.

It’s a shame, because there’s a lot of value here. I fear that the style may put a lot of people off. And if you read this book, you might think instead that it says far more about me as a reader, and my own knowledge of a topic (or ability to acquire information), than it does about the work in hand.

I shall leave that for you to decide.

Daniel J. Levitin’s The Organized Mind: Thinking straight in the age of information overload has a lot of potential for being an important and necessary work, far beyond the well-read, or well-educated. Whether it reaches that standing remains to be seen; and given its present construction (in this edition), I doubt very much that it will.