Kafka: Weird, frustrating, important. In reading this volume you will learn not only why Kafka is important, but you’ll learn a lot about yourself, too. 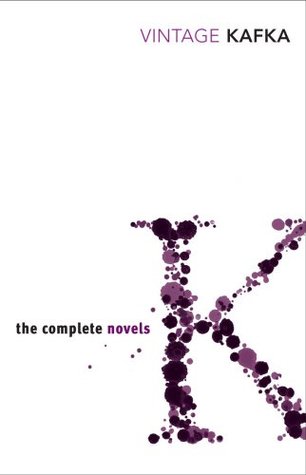 The Complete Novels Of Kafka by Franz Kafka
My rating: 3 of 5 stars

This sizeable book is actually three novels in one volume. The Complete Novels of Kafka is comprised of (1) The Trial; (2) America; and (3) The Castle. Given I had never read much of Kafka previously, it seemed to be as good an introduction as any to his works. However, it is impossible to rate, which is why the rating here sits only at three stars: As much of a middling rating as I could achieve, given there are only five stars possible.

The first novel, The Trial is the absolute height of classic, necessary-to-read literature. To a lesser extent America follows. And to my mind The Castle is last in the volume because if it were first, then nary a man among contemporary readers would persist with the rest of the stories. And I say this in full knowledge that The Castle is also upheld as one of Kafka’s finest works.

The Trial is a fascinating work of what could be taken as being frustration with the hidden vestiges of authority and fascist society; or, just as validly, the tormenting fantasy of a diseased mind. It tells the story of K. (Joseph K.) who, upon waking one way, is told that he is charged and is to undergo a trial. But we never find out what he’s charged with, or whether any of the bizarre trials held in houses in strange parts of the city, are actually real (in any sense of the word ‘real’). The visions he has during his workday may or may not be real to him or anybody else, and of his eventual death at the end the same may be said. It is at once an absurdist and artistic masterpiece. It deserves multiple re-readings. In fact, it is so remarkable that I have a strong desire to add it as an independent work to my library, simply so that I can re-read it with greater ease.

The novel that follows, America is very different, yet Kafka’s style of deliberately causing you as the reader to retain your ignorance of a society of which you can have no legitimate knowledge beyond the primary character, is very clear. This novel is reminiscent Dickens’s portrayals of the USA in his novels. vis: Of a place that promises you great things, yet is filled with the self-serving, is unsupportive of people from elsewhere, and yet enticing in its continued promises. A remarkable story, America is a sparkling read for the reader attentive to nuance, implication, and similarity of circumstance. I say that because if you are not attentive to such things, then this novel will fall completely flat for you, and you will leave the experience no more enlightened than when you entered upon it.

But as for The Castle… it is a novel for which I feel that my ability to penetrate the author’s style and intention rather failed me. The hallmarks of the style (reader’s ignorance, the character’s confusion and dilemmas, the strange foreignness of the character’s own people, and so on) are ever present. But it does go on. And it goes on interminably, even past the intentional ending and through into the ‘found’ papers that were subsequently worked into the definitive editions, as in this particular edition. This interminably going-on is either failure or genius. As a reader newish to Kafka (newish because I’ve only read three novels, not the author’s entire canon), it is a failure. And I fear that subsequent pondering will cause me to believe that it’s genius. The fear itself is not unfounded, because the truth of the matter is that I barely read entire tracts, seeming to go in circles as it did, with hardly a break, in a narrative that turns on itself in a spiral from which there is no emergence.

But that’s exactly where its genius lies, one could argue. That genius is exactly what the human condition is like. Dealing with faceless authorities in a system that makes sense to nobody except those within them; dealing with the wiles of relationships and communities as a stranger, when they, too, make no sense except to those within them; the intense logic and sense-making you know that you possess, in a world of apparent madness. And the fact that, no matter what you do, offending people is the order of the day, unless you bow to the accepted way.

So you see, even by the time I’ve been writing this review of The Castle its point makes a liar of me. And now, I too, become K. himself.

Perhaps, after all, that was Kafka’s intention.

In any case, The Castle is a tough read. The characters are impenetrable. The story is impenetrable. You will get bored. You will wonder what the fuck is going on. You will fail to retain your patience with the pace. And the absurdity of it all will cause you to wonder whether you, or Kafka, or the characters has gone mad. And in the end, you’ll be relieved that it’s over. Freed from the clutches of this weird universe (which we now know reflects so much of our own), you’re capable of going on to that other pile of books that for the past month you’ve been yearning to read.

And still, The Castle‘s artistry lies in the fact that as a reader you are in this position, when in fact its primary character is, too.

Perhaps the solution to this intense frustration is not to read three Kafka novels all in a row, but to space them out. And perhaps that is a good reason not to buy such a gigantic volume all at once in order to immerse yourself in a Kakfa Universe. But if you are new to Kafka (as I was), and want to know what the fuss is all about, reading these books all in a row is a godsend: You will grasp, immediately and deeply, why Kafka is such an important writer. It’s because your life is just as weird and impenetrable as that of Kafka’s characters; and in walking alongside them, you learn about yourself.