My dominant feeling from the 1990s was that every single person is important and that being strong is not just possible but critical. Read on to find out why. 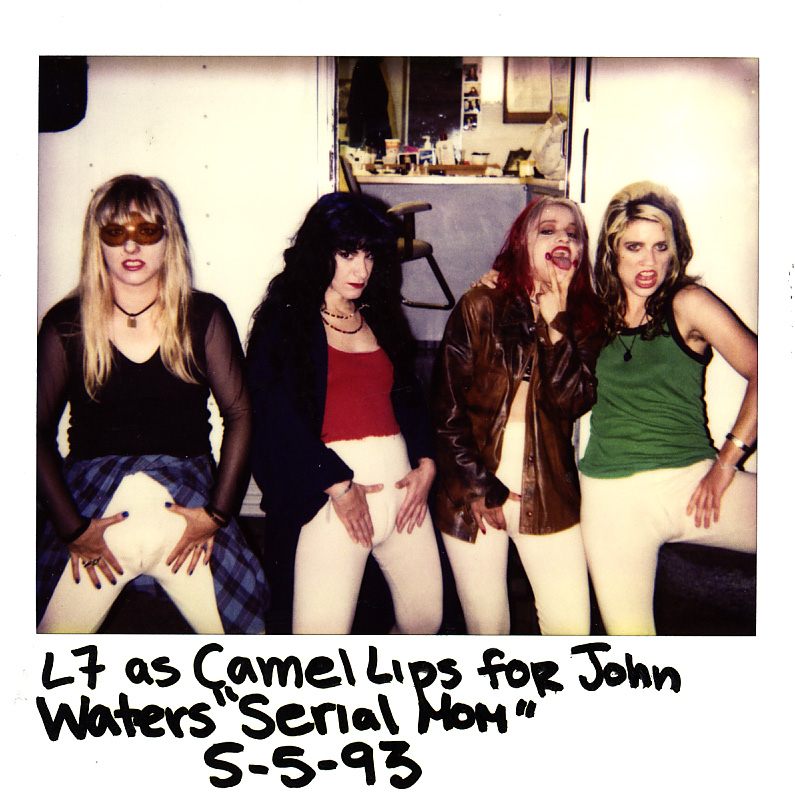 I grew up in the 1980s, in rural Australia, meaning that I was a teenager in the 1990s. Reflecting on that decade is fascinating; not least because I didn’t find metal until I was almost 17… when it was way past its prime, and had already morphed and changed a great deal. I had metalhead friends but I wasn’t one of them – that’s something most people don’t know about me.

Yesterday one of my good friends and I had a chat about the 90s. She was a young kid in the ’90s: She’s something like 12 years younger than me. And I found that she had a warped idea about that decade’s fashion, its music, its fabrics.

But I was a teenager. In 1995, I was in 15 and in year 10 and it was a goddamned magical time for me. I still rate that year as among the best I’ve ever had, notwithstanding the sex that came after it, or the weed or the businesses, or the marriage, or anything awesome since then. In 1995, I was just ME: Driven, unfettered, unapologetically me. I didn’t rediscover that woman until I was 30. And there was no discovery in 1995. I just was.

You can’t understand the 1990s without understanding its sociopolitical context, because it was influential even in rural Australia.

In 1989, we watched the television spellbound as young people in Germany pulled down the Berlin Wall, and ended the separation between East and West Germany forever. We watched the television, proud as hell, as Chinese students stood up in front of the great People’s Republic in Tiananmen Square, and were speechless and horrifed when they were crushed by tanks.

In 1991 we watched the United Soviet Socialist Republics dissolve, and saw their rough socialist lifestyle start to disappear.

In that same period up through to 1992, we watched the United States decide to start the Gulf War, and all I remember (being 10 or 11 at the time) was that these greedy cunts wanted the Arabs’ oil and they should get the fuck out and learn to behave.

And here in Australia in 1992, we had the landmark MABO decision that upheld Murray Islanders’ native title to land in the Torres Strait and felt proud to be a nation that was finally learning to grow up.

That year, 1992, was a massive year. I turned 12. I finished primary school and tearfully said goodbye to the kids I’d spent my daily life with since I was four years old. Most of them went on to the Catholic college, but the rebels like me went to the High School. In 1993, I started high school while I was still just 12 years old. And I discovered the most incredible freedom. Apart from that time when I had $700, a car, and no real destination in mind at the end of high school, starting high school was like having all the shackles off and the space to breathe as a person.

At this time, pop culture was moving away from the sexual rock of 1980s, which was reflected even in all the high school horror movies of that decade. We’d come through the AIDS epidemic, we’d had the Grim Reaper on the telly warning us that everyone – even kids! – were vulnerable, and people were in the shock of thinking about safe sex, safe drug taking, safe blood transfusions. We’d just come out of the time when Benetton was slaughtered for its advertising campaigns of white angels and black devils holding hands, which very nearly destroyed the brand. I remember that campaign as a thing of beauty of kids of all colours coming together; the grownups all saw the hairstyles and freaked out. I clearly remember thinking that it was all a gross overreaction, and that it would just force good things to go back underground.

When it comes to the fashion of the early 1990s, everything was characterised by this princessy, white wealth bullshit that I remember everywhere, that stemmed from a strengthening conservatism that was struggling to regain the upper hand. We’d been through the music fights of the mid-80s where Twisted Sister fought the PMRC in the USA – and won. America was freaking out about the individuality and fuck you attitude of rock and metal. Australia was freaking out about the fact that songs had swear words in them (we didn’t have ratings on music in the early 1990s). Censorship was winning the war, too: People wanted to put in stronger ratings on movies, wanted to rate and deny access to our music. Modesty was back in fashion – big time. There were horrid, knee-length and waist-high denim shorts, midriff-covering t-shirts, fake pearls, lots of pink, big shoulders, knits, and long dresses. It was girly like Little Women is girly.

And at the same time, we started high school knowing that jobs were fucked. We watched our dads be cut out of jobs. We watched the major utilities merge, cut offices. We watched our parents work three jobs between them, plus have hobbies, and come home swearing about work: Working hard and not getting anywhere. I watched my mum and dad both strive to better themselves through education. They turned their hobbies into money-making activities that they loved. My dad started a business right when things were toughest. And to his incredible credit, his company is still thriving.

We were in a time where the schools (in Victoria) were getting closed down and merged, in the 90s, to “save money”, meaning that our established rural schools simply ceased to exist. My high school, which was Hamilton High School, had a proud tradition – and that was all gone, boom. The Hamilton Technical School had its own proud tradition – and that was all gone, boom. As students we’d bought into the personality and histories of the schools, and it was wrenched away from us. Suddenly we were thrust together. We didn’t choose this otherwise we would have gone to those schools.

And eventually we realised that none of it fucking matters.

Life is ours, we live it our way
All these words I don’t just say
Nothing else matters
– Metallica, Nothing Else Matters

We’d seen (and kept seeing) an emerging conservatism. And in Australia, we were seeing the rising popularity of the monarchy. Princess Diana was at the peak of her fame, and was a woman of note, one that we felt we should all aspire to be. She was strong, determined, caring and empathetic. She was in every magazine.

But in the 1990s we had an emerging fuck you. Our parents, who grew up in the 60s and 70s, knew how important it was for their girls to have choice and independence. They strived to help us achieve our intellectual peaks, while helping us to become independent, and also while supporting us lovingly and giving us the opportunities that they never had. They were learning how to relate: My mum had more than one conversation with me about how it’s ok if I end up a lesbian, and in fact that would be kinda nice because she wouldn’t have to worry about me getting pregnant. My dad had frank and open conversations with me about how if I did get pregnant and wanted an abortion, that’s ok because he would support me no matter what.

Our role models were female authors who wrote meaningfully about teenager experiences; they were singers like Cindy Lauper who were singing songs when we were just two or three years old about enjoying the fact that you’re a chick. Then when we grew up, in the mid-90s, we had bands like Hole, Babes in Toyland, L7, Fur, and a bunch of others, who were suddenly expressing the thoughts we all had, which were:

WE ARE NOT YOUR PRINCESSES, FUCK YOU.

Bands like Nirvana, who are given the pedestal of teenagerdom in the 90s, are only the surface. Sure they echoed how we were all feeling, like the fact that we couldn’t really see each other but felt powerful because we knew that we were all the same.

Metal went from thrash to death metal in a heartbeat, and then seemed to fizzle out underneath the popularisation of the emerging grunge. And grunge itself was a grotty, gritty realisation that we were sexual, pleasure-loving, independent demons, that life equals struggle, and that no matter what we do someone will be there to screw us over.

We had “careers” classes where the teachers were pretty well like, sorry kids the future’s pretty screwed. They were all pushing us to university because they couldn’t see any of us just getting work.

So us girls? We had strong attitudes. Fuck your pearls and pink and long shorts. We were happy to wear army boots over a petticoat with a tshirt over the top and a druggie shirt, with clothes bought secondhand without labels. Smack was a big deal – even, in retrospect, idealised. We understood that once we finished high school, we’d be lucky to get into uni. But we knew that getting a job was impossible and if we did get a job, we’d hate it.

We started high school, knowing this. Then in our peak high school years, we had strong women in strong, fuck-you bands, cheering us on. Encouraging the fact that even if you’re a fuck up you are still you. And that is what’s important.

What the kids who were kids in the 90s remember is Eminem, bad trackidaks and a feeling of nothingness characterising their entry into the new century. Then for the new century, their dominant feeling is fear.

My dominant feeling from the 1990s was that every single person is important and that being strong is not just possible but critical. I emerged out of that decade as a woman knowing that gender wasn’t an important card to play. Fuck you, I won’t do what you tell me; and fuck you I’m not your princess.

This might explain why I don’t do feminist. I don’t do girls-only networking that’s safer. I don’t do the mummy thing. I don’t do the girl power bullshit: In the 1990s we had strong women who just did stuff because they knew they could. We didn’t wank off about it in little safe groups and we didn’t expect that life would be safe, cushioned, or even the slightest bit easy. We expected hardship; some of us ended up creating hardship as a result.

But, the thing that is remarkable about us kids of the century is that all of us have a fire inside us that won’t ever die.