Brad Coleman, tattoo artist, friend, crazy dreamer, died this month. This is my little thank you note to him for sharing a part of his journey with me. 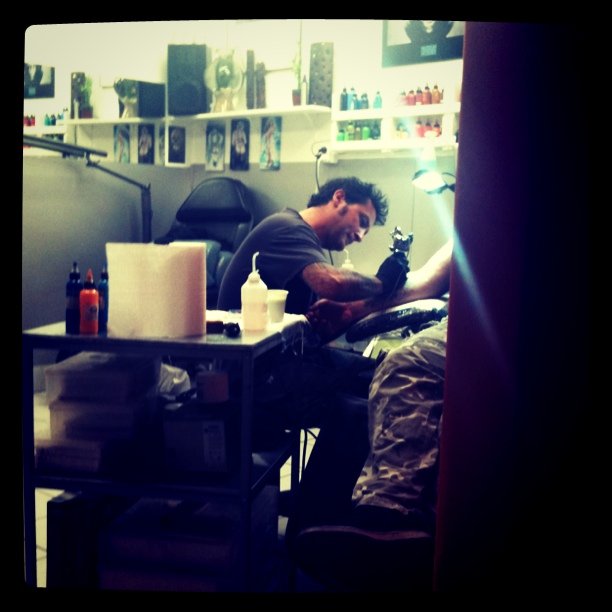 I wrote the below tribute to Brad in the first few days about learning of his death. If you’ve found it because you were wondering what happened to The Ink Pit in Adelaide, because you were an acquaintance, or you were lucky enough to be tattooed by the award-winning tattoo artist himself, then I’m sorry you have to find out this way: Brad Coleman died in 2017.

Because of when the tribute was written, I was kinda mad about how he’d treated himself, and you can feel it in the writing. It’s probably unfair to focus on his enjoyment of the banned substance; he was a remarkable, sharp-witted, talented man, and it was an absolute pleasure to have known him. I am so happy to have met him and spent time with him when I did.

It sucks that he never got the hear the latest Queensryche or the Darkness albums, because he loved them both. And it’s a shame that he won’t be able to come with us to see Whitesnake next year, especially because he nicknamed one of his last lady friends in Adelaide (not when she was around, obviously) Dave Coverdale. Haha! Missed shit-giving opportunity!

I thought about editing what I had originally written. But I have decided not to. Because that was the space I was in at the time.

So if YOU are a friend or former client of Brad’s, welcome. Leave a comment at the bottom. I’m sorry you had to find out this way.

This month a good friend of ours died.  Brad Coleman was a crazy artist, who earned a living by tattooing people, never had a boss, was perpetually curious, always positive, never-endingly creative. And when he died, I realised that he’d played a big part in shaping how I see the world, even though I only knew him for a brief period of time (fewer than 10 years). 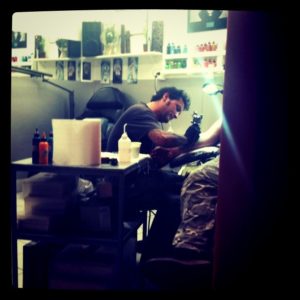 Brad was never destined to see 50. He had a lifetime of drug use, mostly speed or meth. He was the party guy. He wasn’t known for his sobriety. If Brad had stopped taking drugs for good, Hell would have iced over. It’s just who he was.

The best example of this was a few years ago, after my husband’s birthday dinner where we’d gone out for suckling pig with a bunch of people. Brad and his wife (at the time) were among them. We had planned to hang out afterwards, but he decided to go out in town (which largely meant to go and score). They’d left their car at our place.

It stayed there for two or three days. We didn’t hear from them nearly the entire time. Eventually they came back and rescued their car at the end of a days’-long bender and went home. But that gives you a sense of scale. Going to their house on a Friday night meant days and nights of drink, food, and fun, literally, right through to Sunday night or Monday (if you pulled a sickie). He never worried about bosses. He never had one. His place was like a time warp: Time didn’t matter. You were in this bacchanalian grotto of amazing food and great people, with a pool and a spa, and as much space to sprawl and chill out as you wanted. Where the only thing that mattered was enjoying yourself. It was amazing. And, to the diligent, dangerous! Ha!

I met Brad through my husband, who has been friends with Brad for much of his life. Brad was Troy’s tattoo artist, they’d been in bands together. I met Brad at a crazy time of my life, one in which I was rediscovering who I was and how cool people really are when you just let them be who they are. I found myself around people for whom drugs weren’t taboo, they were a choice. By far the majority of people choose not to take them to excess.

Brad was perpetually in a good mood, drugs notwithstanding. He was infectiously positive. It was rare that you’d catch him shitty or dark, unless he was coming down. I never saw much of that side of him, though many others have, my husband included. The side I most often saw of Brad was the fun, drunk or high, ideas guy. He was insanely creative, told crazy (and sometimes just terrible) jokes, didn’t really have any barriers, and was perpetually trying to get into my pants. He liked to joke about having a Ranga Reserve, where redheaded ladies (like yours truly) could swing free for his entertainment. Ha!

After a marriage breakup and some relationship and actually really horrible life disasters, amongst all of which he lost or sold most of his stuff, Brad moved home to Townsville. He was really unwell for about 14 months, which we heard through the grapevine later was a result of septicaemia as a result of drug use.

The last we heard from him was two days before he died. He said he’d had heart surgery(!), but got no clarity from him about that disclosure. He told us he missed us.

And then he died.

Troy always joked that Brad would die before he finished his tattoo. I don’t think any of us seriously thought that it would be the case. It was.

I hope Brad knew how much he was loved. When he died, we were scratching for information about where to send tributes, how to get together for memorials. It’s surprisingly difficult to reconnect, to learn about people, to find out what’s going on, when you’re as far apart as Townsville and Adelaide. I heard that there’s going to be a memorial for him here, just for friends, but who knows whether it will happen.

Thank you, Brad, for sharing part of your journey with me. Thank you for being an insightful, artistic genius. And thank you for your insane humour. You taught me a lot about how to be a grownup without losing my inner child, and as a business owner were the total opposite of everyone ever put on a pedestal.

The people you love are more important than anything else in your life. Because even if you do build an insane business, serve lots of people, or acquire a billion things, at the last moment only love matters.

Also, to anyone else out there reading this: Doing drugs or drinking every day will kill you young. It’s just a thing. If you need help getting clean, ask for it. But know that you have to want to be clean, more than you want the substance. Otherwise, any rehabilitation effort will be a waste of your time.