A short piece about an unexpected, welcomed, kundalini awakening, after a relatively mundane stretch class. 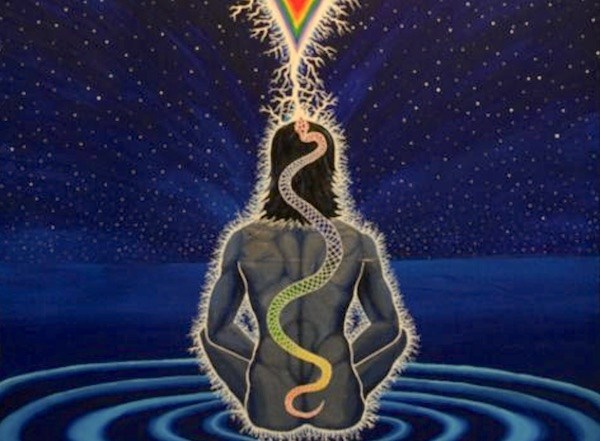 Deep down in the darkest realms, between the outward-reaching pain, the deep comfort of breath, and the intense inward-facing existence of pure strength, she emerged.

It was sudden. One moment in a room with a group of women; the next she was in my mind’s eye, strong enough to have been in the foreground of experience, of myself as a young child. She was maybe seven years old.

A wave of sadness washed upwards and outwards. She was afraid. She was hiding from the world, afraid of what it might do to her if she opened herself up to it. She’d retreated back into this corner, a long way down, hidden, locked in, undiscoverable, closing life out. Deep down, in a place challenged before only by dance.

She was there, and so was her fear; the fear that manifested as an emotionally upheaving terror.

Seeing her there, knowing where she’d come from and how she’d been uncovered, I smiled, breathed through the sorrow and let it rise. I opened my heart to her, reached out a hug.

‘It’s ok,’ I said to her. ‘You are safe and strong. You can open yourself to the world. It’s a beautiful place.’

Her resistance rose in a wave so overwhelming I nearly broke into tears. Riding it steadfastly I rediscovered my strength and, swallowing the outpouring, breathed reassured by the truth and love of life. I welcomed her past the sorrow. Accepting both fear and sorrow, I held her, warmed her. Showed here that it was time for her to rise. She trusted me, allowed herself to emerge from her self-imposed prison, waves of anxiety and sadness abating as she faded away.

The girl disappeared as the last out-breath expelled the sadness and terrifying resistance.

A lingering sadness unlocked, and woven into some kind of newly discovered personal strength, petered out until suddenly my stance in the world was strong. I felt like I was standing with a strength of spine I had lost; or, perhaps, had never truly owned.

In the hours afterwards, the girl was replaced by a spiralling kundalini that rose into consciousness, dancing in circles around my spine. Languidly the snake rose, enjoying the unfettered path from deep within the dark. The serpent entwined herself through every energy centre, radiating joy with every passing portal, until, indulging in her journey up, through and around the brain, connected root to sahasrara in an exhalation of exhilaration.

IMAGE SOURCE: What is a Kundalini awakening?