The Integration Project: Day 2 – A meeting and The Board v2.0

A meeting with a new friend resulted in me rethinking how robust is The Integration Project’s storyline. Cue changes to the subplot, the structure, and some deep thinking about telepathy.

The Patrons-only podcast of this post is available here.

The morning today was spent in a long – really long – meeting with a new friend, Geoff Kwitko. Geoff and I met at a Southstart Conference a few years ago, and hadn’t seen each other since. He is a massively successful entrepreneur and digital marketer.

Anyway. Geoff is an author. A new author. The entire writing world is new to him. He learned about many concepts like foreshadowing just three weeks ago. His whole approach is really different from mine. His primary goal is not to have a great book, but to write as many plot twists as possible without it becoming completely ridiculous. So, his ideal outcome is a ‘brilliant, but insane’ kind of book.

Gotta admit, I really admire it. My story is paltry, straight-forward and boring in comparison.

As a contact, Geoff is super useful and valuable to me. He has been fascinated by science since he was a kid, and in particular with the science and fantasy of telekinesis and telepathy. As someone who has an ‘engineer’s approach’, this means that he throws himself into learning as much as possible about a thing until he reaches convergence: The point where he’s not learning anything new. Then, whatever his outcome is, he uses the outcome to practice what he’s learned. Therefore, the exercise of writing a book is, for him, a way of his testing his knowledge.

In terms of my story, though, Geoff’s ‘engineer-style’ approach means that he’s read loads of things about the exact topic that I am writing in. How do humans connect? How do they learn from each other? What is the neurology? What does it mean for how we connect with the greater consciousness if there is one, and in what ways can we leverage that for ourselves either personally, or through technology, or some other kind of aid?

We took it in turns telling each other about our projects and getting to know each other. The process of exploring my story with Geoff was enlightening. In the verbal explanation, my story became a dual story of the hero and The Integration Project. He was excited by the very idea that the hero becomes valuable to The Integration Project and that they don’t want her to get away. Therefore, in explaining the story, I went with the flow and explored some of this stuff, which I hadn’t even put onto The Board in the past couple of weeks.

Talking about the plot line with someone else in great detail enabled me to see how essential The Integration Project is, as a separate story line. I was clearly able to see its political relevance to the character.

The thing that bothered Geoff is the same thing that has been bothering me. It’s that moment of discovery; the time in Act III where the protagonist “happens upon” an insight that switches her knowledge from do this with technology integration to do this as a non-integrated human. It’s such a gigantic leap of the imagination that I have it written on The Board as a question mark, thus: 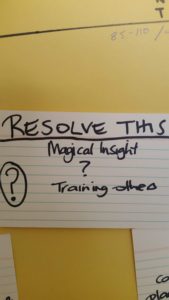 Or, rather, I do now. Geoff said he’s going to cogitate on the issue and send me via email a bunch of ideas and possibilities, and I am super grateful for it. It means I don’t need to spend loads of time in research. Also, getting information from someone who already has a wealth of knowledge means that it comes to me pre-digested, with the potential for greater insights.

When I got home around lunchtime, I fiddled around with some things, but I was restless. The restlessness is because I needed to go back to The Board. I had to add the storyline of The Integration Project to The Board.

As I stood and wrote cards, replaced cards, removed cards, I also included the story line for our hero’s Long Lost Friend, who emerged during scene 1 from the wings, and just sat down and began a conversation. I needed to give him his place. Because I hadn’t done that with enough clarity, writing him into the story was nice, but thin. By the time I left my characters in the last session, I had started feeling like I was pulling threads out of the fabric; that I’d stopped making something pretty and was kind of doing things at random. Pulled thread lacework is lovely, but do it too much and you end up just with holes. 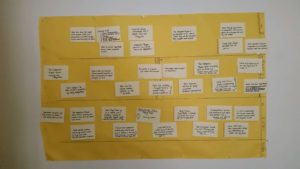 Something about Geoff’s discussion about plot twists saw the Long Lost Friend become a plot twist himself. He begins in the same company as our hero, but he’s vague about why he’s there and our hero is just excited that he’s around again, after having been overseas for so long. They were really good mates back at uni, and after he went travelling, they became the kinds of friends who stay in touch on an ad-hoc basis, but not tight like they were. So, while our hero has a good understanding of his life, he only reaches out to her when he’s in between women and wants someone to talk to – which he hadn’t done for a while.

Hence our hero’s confusion when he arrived and didn’t want to discuss the nature of his breakup, and wondered why she hadn’t heard from him.

Nevertheless, the Long Lost Friend is a critical element of The Integration Project. In our story, he becomes the one who talks through the pros and cons of being Integrated with our hero. His opinion really counts to her, so she agrees that it might be amazing, and goes along with it. What she doesn’t realise is that he is working on her because he knows her so well. In his mind, she will be the star of the project, the one who is going to demonstrate the technology. That right: He’s using her.

But she has no idea.

As the story continues on its merry way, this relationship between the Long Lost Friend and our hero becomes distant. It happens because our hero has closer friends now, and there’s something about her old buddy that doesn’t feel quite right to her. This is good, because it turns out that our Long Lost Friend believes he knows her better than anyone else, so as he – as an arm of The Integration Project – begins to play games by seeing what he can push to her, get her to do, she is almost convinced that she’s doing it herself.

Except, there’s something about it. It’s enough to doubt whether she’s her, or machine.

This relationship in the story also gives me a good antagonist. Towards the end of the story, he sets the Integrated the task of locating her; but he’s the one who goes with the Integrated to convince her to come back. She’s such a valuable tool for them, and he’s the one closest to her, that she would be less likely to resist him. The trouble is, she works out that he’s not really on her side any more – that maybe he never was – and that’s what sparks off the conflict right at the conclusion of the story.

The entire narrative is much richer, now. It’s not surprising – the plot has actual storyline. The Board v2.0 actually has a story I can follow now. I know that last week when I was writing about this, I talked a lot about not wanting to over-scope the story on The Board. But it was foolishness, really: Without doing it properly, I’m going to end up with a glaze, instead of a whole donut.

It’s been a productive morning, overall.

One of the first resource I have found is called, simply, Telepathy. It was written in 1910. Right in the introduction, the author talks of the etymology of the word telepathy. It is a combination of two terms: Tele meaning, ‘from afar’; and pathos, meaning ‘feeling’. Therefore, telepathy isn’t thought-transference at all. It is feeling transference. I went down a rabbit-hole of reading for a while.

It strikes me immediately that this is a safer bet than telepathy and thought transference, because this is a space that I work in a lot myself, personally. Intuition can be trained, but real intuition is a feeling, not a thought. It’s simply knowing what the feeling feels like, knowing how to identify it, knowing that it’s there before it disappears on you.

If telepathy is feeling, and not images or reading, then I am already halfway to the magic solution – not least because on one of the story cards I have notes about feelings rather than thoughts.

In any case, there’s a lot to chew on – and I have a bunch of new things to read. Which I’m going off to do right now.

Next week I expect to smash out an entire day on this book, to have The Board in robust shape if anything is missing, and to really get a leg up on the narrative itself. Exciting times!