I’ve been an adult ballet student for almost nine years. Today I wore demi-pointes in class for the first time. Here’s what it was like. 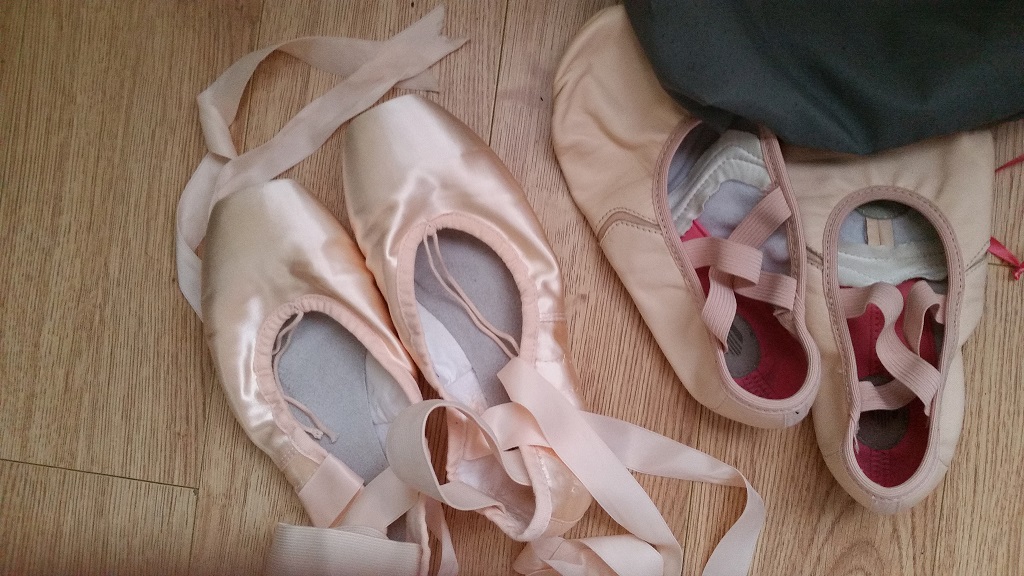 Demi-pointe shoes are a not-very-well-known-outside-of-dance ballet shoe. They’re a bit like training wheels for the dancer who wants to dance en pointe.

For my birthday in 2019, my husband bought me my first pair of demi-pointes. They’re Bloch shoes; and the young lady at Adelaide Stage Shop was friendly and obliging. Even if she did comment about how much she hated demi-pointes.

But today is the first day I wore demi-pointes in class.

I was so nervous about it, because there’s something about not being tall poppy in Australian culture. I talked to Chylie (our current teacher) about it.

‘Why demi-pointes?’ she asked seriously.

‘Well, I want to train en pointe eventually,’ I replied. ‘And I want to build the foot strength and flexibility to do that. So I figure that training for six to 12 months in demis is a good idea.’

She regarded me quietly for a moment. ‘Sensible,’ she replied. ‘But you’ve danced en pointe before?’

I shook my head. ‘Honestly I just don’t want to dive into dancing en pointe and do something stupid like break my ankle because it’s so different.’

She seemed surprised that I’d never been pointe trained. Then she replied: ‘It’s definitely the mature way to approach it.’ She went on to tell me to keep using a theraband to strengthen my feet as much as possible.

She asked to have a look at my shoes; and then exclaimed the same thing as the girl who sold them to me: ‘Ohhh yuck. I hated demi-pointe shoes! They’re just gross.’

Comforting. Is it weird that I actually like them?

I’d spent two weeks doing a basic barre at home in them before I even took them to class. It was completely worthwhile. My balance was all in the wrong place; it helped me understand the feel of the box in the shoes, the slipperiness of the satin, and how best to tie the ribbons so that they weren’t falling off halfway through a movement.

The experience of wearing demi-pointes in class was fascinating. I felt like I’d levelled up, even though I hadn’t really. I paid attention to my posture differently, because I was forced to by the position of my feet. The shoes shifted my balance into the correct alignment, too, and the net result is that I was properly on my leg.

The slippery satin of the shoes made me cautious enough to slow down my pirouettes at the barre, and that helped me pull off a perfect turn. One of my barre-mates noticed, and commented. I laughed. ‘It’s all the shoes, man.’

However, the experience of my first class in demi-pointes helped me to understand more about where I’m being lazy:

By halfway through class, my foot muscles were on fire.

But then, when I removed the shoes (replacing them with my MDMs, whch I adore) for the centre work, something magical happened.

I was completely on my leg.

I had stronger promenades, stronger balances, and a better line. I really felt the floor. Weirdly, I felt like I understood the floor better.

Oooooeeeeee, I thought. And then I got cocky and all my turns were rubbish.

Dance is something that I tend not to write about here, but I’ve decided to surface more of it, because it’s a key part of my artistic life.

When I decided to ask for demi-pointes for my birthday, I wasn’t just asking for dance shoes. I was committing to a pathway of which I have long dreamed, which is to level up my dancing to a significant – er – point. You can dream about dancing en pointe all you like, but at some stage you have to commit to the pathway; and demi-pointes sets me on that path.

When you’re an adult dancer, nobody is going to push you in a direction. Unless you’re extremely lucky and attend a structured dance school (which in my experience is rare for grown-ups), everything you do is up to you: The classes you take, how many classes you take, when you go to another level, the type of dance you pursue. This means that if you don’t commit yourself, your teacher isn’t going to say to you, ‘Hey Leticia, consider dancing on pointe now, I think it’s time’. Instead, you think about it, have some conversations with peers and your teacher, and then you make the decision.

For me, this happened when a new classmate, who does dance en pointe in my classes, turned up. In a conversation that we had about her dance journey, she revealed to me that she didn’t start dancing en pointe until she was 38. I was, at that moment, 38 years told. I told her.

She smiled, saying prettily, ‘Then you really have no excuse.’

I’m writing this while rolling out my feet under the table, which feels aaaamazinnngggg. My next task is to make sure that the business side of life is structured well enough to allow me the freedom to dance. Because, ultimately, you can dream all you want to; the only thing that moves you towards a goal is action.

Stay tuned for more Dancer Life posts, as I start taking this side of my life more seriously.