This album, released on 2 September 2019, demands 100% of your attention. Absolute must-listen for any Atlantean Kodex fan, or fan of epic heavy/doom metal. 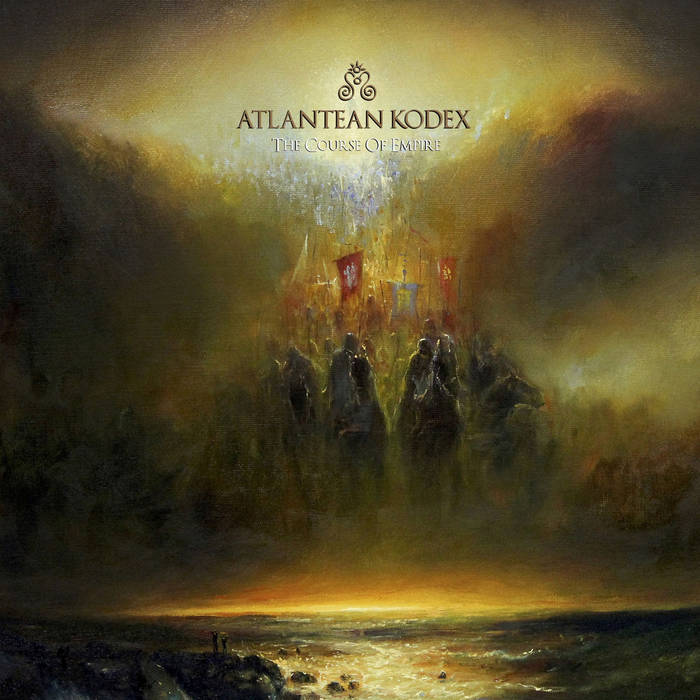 Atlantean Kodex isn’t a band you’d just naturally fall in love with if you find Markus Becker’s vocals to be an acquired taste. But once you’re into the vibe of that sound, the band’s music, themes, and songwriting are simply entrancing. I say that about The White Goddess especially. I’ve almost melted that album by playing it so much.

So when my husband sat, transfixed, listening to The Course of Empire, and then exclaimed that he will never get through the album because he couldn’t help himself but listen to the first two tracks repeatedly, I sat up and paid attention. He sent me the link, and here we are.

I’m doing what I never do with album reviews and write this while listening to the album on the first listen. Therefore, have a warning: This isn’t so much a review as my raw reaction to the release.

Skipping ahead to track three, which is Lion of Chaldea (Hero’s Journey), while setting up for the working day, I completely understood my husband’s transfixion. By the time I was walking across the bridge of riffs three-quarters through the song, I was completely inside the Empire. The carels at WOTSO had disappeared, I was barely breathing, and I had lost all sense of my physical self. The only thing of which I was conscious was a rolling arpeggio. By the time I realised it, the moment was over and I was desperate to go back to the start and listen to it all over again.

Instead, I went back to the start of the album.

By the time I was five minutes into Chariots (Descending from Zagros), I was regretting listening to this in a coworking space.

It demands 100% of your attention.

I wanted to stand up and raise my arms in the air, reach for those all-consuming invisible oranges, and proclaim victory. How am I only four tracks into this album?

Like many other bands of which Atlantean Kodex’s work is reminiscent – Bathory, Manowar, Twisted Tower Dire – they tend to release works that lodge themselves like seeds inside your body. I really good example is Sol Invictus from The White Goddess, which I think I have played on repeat more than is seemly for a woman of my age. The band leans more towards epic heavy/doom than power metal, even though its themes may occasionally make you think otherwise. ‘Majestic’ is a good term for Atlantean Kodex; though if you’re not really into the genre, or the vocals, you might just think it’s completely gay. Horses for courses, right.

Anyway, enough of the technical rumblings and back to the gut feel of this album. Fans of The Hobbit (film) will likely relate The Innermost Light (Sensus Fidei) to The Misty Mountains sung by the dwarves. And, you know, just as I wrote that, I decided I had to listen to it again to see whether I’m talking out of my arse.

Nope. No, the cadence is totally The Misty Mountains. With guitars, more than a little bit of joy, and a slightly faster tempo. I bet you could even sing it:

Where is the climax of The Course of Empire?

Some of those who have purchased and commented on the Bandcamp page suggest that it’s around track six, A Secret Byzantium. It’s easy to see why. It’s a weighty track, its conclusion is imperfect, and the track that follows, He who walks behind the years, starts out with a completely different vibe. It’s definitely a turning point in the cadence of the album.

And from there, The Course of Empire cascades down the other side of the mountain and fades away.

At least, that’s how it seems, compared to the first half. In terms of run-time, it’s only slightly shorter. The entire release clocks in at just over an hour.

If you’re a fan of epic heavy/doom, do yourself a favour. This is an outstanding album. (She says, after one listen. Dangerous territory…)

You can go listen/buy at https://atlanteankodex-vanrecords.bandcamp.com/