The secret to great performance lies in between

John Garrett asked me in a podcast interview recently (which will appear on his show, What’s Your And?, in a month or two) how dance affects my business life. The answer is that every dance class is the best business coaching you’ll ever receive. 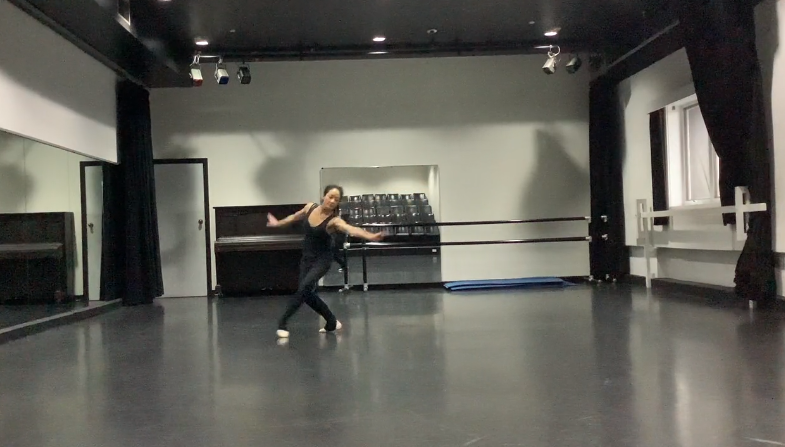 ‘That was good you guys, but I want you to do it again. This time focus on the between.’

Chylie Cooper, our instructor, turned her diminutive back and went to reset the music as we turned towards the barre and back to the other side.

The exercise was relatively simple. Chylie hit play, then moved to the centre of the room, butt sticking out against the mirror, hands on knees, bent over and watching us intently. Her gaze swept from one end of the long barre to the other.

The dancers at the barre were in the full spectrum of ability. From Veronica, down the other end, who is clearly an independent dancer, with magnificent feet and a beautiful style; to Jess, who is a newbie but levelled up quick.

The rest of us were scattered along the spectrum in between.

Focusing on the between has a peculiar impact on you. No longer is it about where you’re moving to, or what comes next. It’s the quality of the movement.

When you’re focused on what’s between, you don’t have to ‘try’ to be mindful. You just are. Your mind fills every space. Your eyes follow your hands. You breathe as your arms move, and every muscle is energised in every moment of every movement.

You stop Doing The Barre.

It became a theme for the rest of class.

In the centre, we were again exhorted to focus on the between. To stop thinking about practising the movement, and instead to dance.

Yesterday after class, I’d had a private conversation with Chylie; I asked her if she’d coach me once a month. ‘To knock the jagged edges off,’ as I put it to her. I told her that I don’t want to start this year, but at the beginning of next year.

I don’t know if I’ll have the money.

I didn’t even think about what it would do to my time.

The only thing I was thinking about was something Sharran Srivatsaa sent in an email about finding a coach for what you do.

It probably means nothing to you, I realise, but the two pieces came together for me today in the most remarkable way. That is owning up to the fact that, no matter what you do, coaching is useful. That, if you’re going to commit time, effort, and funds to something, it’s better to get insider input into what you’re doing so you stop just turning up and going through the motions and instead claim it as your own. Coaching brings it into your personal life, makes it something for between class.

So this week I not only asked Chylie to coach me, I joined Sharran’s Inner Circle. It cost a fortune. Somehow I’ve stopped caring so much about the spend, and have started focusing on the outcome of the investment.

That’s why, when we were asked to dance today, I did.

Heart first, soul first, I danced. I stopped holding myself back, and I unleashed my energy into the room.

I didn’t look at her, but I could feel her.

I knew that for the second half of the combination, she didn’t watch anyone else.

When we ended, epaulement just so, completely finishing the movement, I caught her eye, and for the slightest of moments, we saw each other.

Then she pointed a sharp finger at me.

‘Great.’ Chylie turned to the rest of the group. ‘See what happens when you’re mindful? You can think about what you’re going to cook for dinner, but you shouldn’t. Especially not when you’re dancing with other people.’

When I dance like this, I feel expansive, expanded, larger than myself. Like I have an inner energy that grows and grows, and fills the room.

When I dance like that, I couldn’t care less if anyone is watching me. My body feels completely different; like it it’s separate from me. It was made to move this way, and all I have to do is enjoy it.

And sometimes, the entire world disappears.

And it’s in moments like this that I get my best feedback.

I might be a tiny little thing, but I will dance a combination right across the room if given half a chance, when everyone else is doing it twice or three times in the same space. And if I’m allowed to jump, I feel like I’m flying; lucky to be a dancer with elevation, in grand allegro I can pause time at the peak of a jump, can stay there for what feels like an entire second. In the retelling, it’s nothing; in real life, it’s a lifetime.

John Garrett asked me in a podcast interview recently (which will appear on his show, What’s Your And? in a month or two) how dance affects my business life.

The answer is that every dance class is the best business coaching you’ll ever receive.

It’s not what you do, and in what sequence, it’s in the between. It’s not having this routine for this, and that routine for that. It’s becoming completely embodied in every tiny thing you do that comprises your performance.

Dance is about showing up, every day. It’s doing a terrible job but doing it anyway. It’s having negative, counterproductive self-talk, and getting past it. It’s a mind game equalled only to running your own business.

And when you’re with others, it’s in being focused enough to share space, heartbeats, energy and direction, that you find synchrony and joyous production.

Productivity isn’t about flogging yourself. It’s about being inside every tiny moment.

Matilda, a PhD candidate who dances in my class, commented over coffee after class that she’s currently doing four dance classes a week. She said that it’s the only thing that’s keeping her sane. That it’s the only place in which her work doesn’t intrude into her mind. She gives herself over to dance completely. She’s in that dark place in the second year of doctoral research when everything feels disgusting and impossible, and the end is too far away to grasp. Dance allows her to come back to her body and just be.

But find the thing that allows you to find the between.

And then bring the between back to every moment of every day.

This article first appeared in The Next Five Years. You can read/subscribe to that publication at https://thenextfive.substack.com.