J.W. Henley’s latest book Migrante is a bleak, heart-wrenching novel about the poorest of the poor. And it’s an outstanding read. 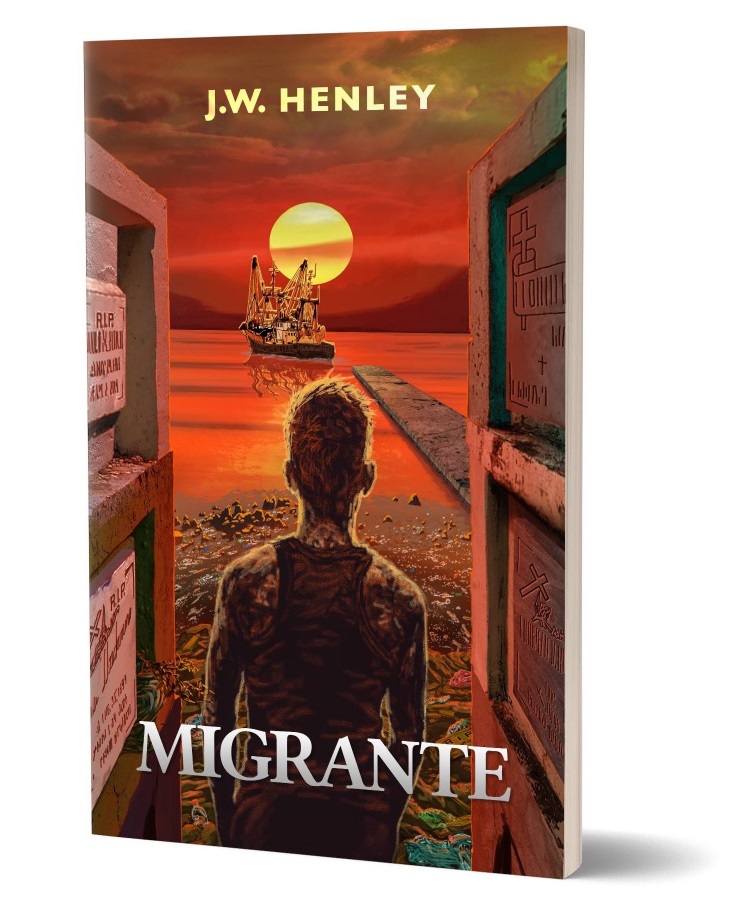 J.W. Henley’s latest book Migrante is a bleak, heart-wrenching novel about the poorest of the poor. And it’s an outstanding read.

I’m sitting here wondering what else to write about this book. But that’s only because its still bouncing around in my head. I finished it not half an hour ago. I suspect it will bounce around in my head for a little while.

Migrante is a fictional work. But it is inspired by the true stories of Philippine migrants to Taiwan, those seeking work, better pay, better conditions than the life they’re leaving behind. Instead, what most find is the opposite: Slave conditions, very little (if any) money, abuse, hunger, and denigration.

It’s not the first work that Henley has produced on this topic. His investigations into the plight of migrant workers in Taiwan, and the conditions of the poor in the Philippines are extensive. (And, warning, if you go to read them, they’re shocking.)

Perhaps it’s unsurprising that, having covered such material in his journalist life, that it all bubbled over into a more extended, emotional and personal story like Migrante.

The book Migrante follows Rizal. Born into poverty and raised from a young age in a cemetery—a place where the poor are buried en masse, nameless and forgotten—Rizal is hen-pecked by his mother for being idle. Though, Rizal’s mother wasn’t the only one to do so. His former girlfriend, and mother of his child, left the cemetery for a better life after Rizal was unable to provide for them.

But that’s not to say that Rizal doesn’t want to work, doesn’t want to provide for his family. He does. His circumstances make it almost impossible for him: Jobs are beyond difficult for folk so far down the food chain. Rizal’s friend Kidlat, a drug addict, sees no shame in idleness. But Rizal wants something better.

It is in pursuit of this ‘better’ that Rizal seeks out a migration broker. Charmed by the man’s stories of the lifestyle—despite his emphasis on work—and his imagination lit up by the possibility of lifting himself out of his abject poverty, Rizal signs up. He does this laboriously, because he can’t read.

The story follows Rizal’s experiences in Taiwan as a migrant fisherman. It paints vivid pictures of the lies he was told, the abuse he suffered, and his attempt to get out of a horrific situation.

I won’t tell you what happens; instead, you’ll go get a copy and read the book. (A discount code is at the end for you.)

Migrante is a relatively short, fast read. It was a risk for Henley to send me a copy of the work, to be honest. I’m fussy about the books I read and sharp when they fall flat. But by the time I was three chapters into this book, I was deep inside the story.

Rizal is a lovable, if hopeless character. By the end of the book, even though I had an inkling of what was about to transpire, I still hoped that it wouldn’t…

I feel, somehow that this hope is the point of Migrante.

The book tells an absolute nightmare of a story; one that is worse for being based in reality. But it’s the hope within a framework of hopelessness that is truly heartbreaking. Without any substantial help, understanding, or (god forbid!) policy against the slave brokers, breaking free is almost impossible.

Migrante is a story of indebtedness, slavery, and struggle. But it is also the heartbreaking story of one young man’s undying hope for a better future.

IMPORTANT NOTE:
J.W. Henley is donating all of his earnings from Migrante to migrant worker advocacy groups in Taiwan, to help further migrants’ fight for equal rights under the law.

Pre-order Migrante until it is released on 16 July 2020 – and get a discount with the code rizal15.