The Untethered Soul is a sideways look at the simple complexities of the middle way. 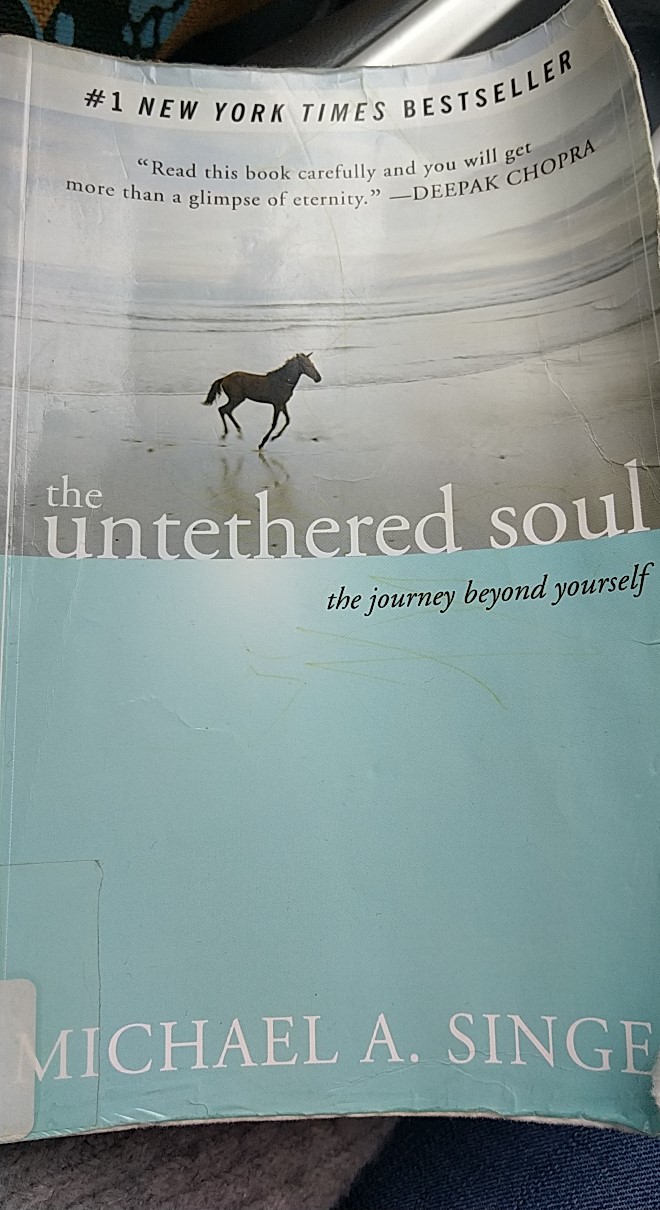 The Untethered Soul is a sideways look at the simple complexities of the middle way.

I came across The Untethered Soul by watching a movement practice video on YouTube.

This one, to be exact:

I fell a little bit in love with the passage read out in the video above, and decided that I had to go and find the book.

Thus began my acquisition journey. In a mood to buy from a local seller instead of a global behemoth, I put in an order (because it wasn’t in stock). However, because The Untethered Soul comes from a small, indie publisher, there were order limits. That means that the bookshop had to put in an order for a certain volume of books from the publisher. And the upshot is that the price of the book skyrocketed to about $50. I could have purchased it on Amazon for $27. But the simple fact that this barrier existed gave me pause.

I wasn’t sure that I wanted to spend $50 on an unknown quantity. And that made me think: Did I want to spend $27 on this book? Off the back of one passage?

Thus it was that I logged onto my library system, found it, and ordered it. That’s the copy you see in the photo at the top.

Once I’d started reading this book, I was happy that I didn’t buy it.

The Untethered Soul might be a New York Times bestseller (which alone makes it weird that the title is still so expensive, right?), but I wasn’t sure that it deserved the title.

Or rather, I wasn’t sure that I was the target audience.

Singer and crew—because the book was a full-scale collaboration, not a single authorship—worked hard to simplify the text. While in the introduction he points out that much of this work was a team effort, he also alluded to the elegance of the narrative. Perhaps he meant ‘simplicity’, as opposed to ‘elegance’, because in my opinion it was very simple but not particularly elegant.

The two are not at all the same thing.

Here is a passage from The Untethered Soul, which to me is simple but not elegant:

As scary as it sounds, that is your predicament in life. Because all of the objects you’re aware of are synchonized, you get sucked in and are no longer aware of your separateness from the objects. The thoughts and emotions move in accordance with the sights and sounds…

And here is a passage from The Hall of Uselessness by Simon Leys, who really is an elegant writer:

For Truth, by its very nature, is ugly, savage and cruel; it disturbs, it frightens, it hurts and it kills. If, in some situations, it is to be used at all, it must be taken only in small doses, in strict isolation, and with the most rigorous prophylactic precautions…

Others will disagree with me on this point. Some believe that elegant writing is the most direct, and most effective at getting its point across. At some point, however, elegance meets style, which means that short sentence length and simple terms isn’t enough.

Recall that I mentioned earlier that this book is about the simple complexities of the Middle Way? I feel I ought to explain what I mean. The Middle Way is the way of peace. It’s that point at which you experience no extremes, of emotion, of thought, of opinion. It’s a point of ‘flow’, you might say. The Middle Way is also known as tao or wu wei: Existence without striving, without explanation. It just is.

That’s what this book talks to you about.

The Untethered Soul speaks directly to you, written as it is in the second person. It walks you through what can only be described as ‘untethering’ yourself from the emotions, thoughts, and experiences you have throughout your life. By way of doing this, it begins to unravel the tao, principles of Buddhism, and other related philosophies and spiritualities.

Once I got over the author’s method and style—if you’re already familiar with the Middle Way, nothing in this book will be new to you—I found myself enamoured with the way in which some concepts were presented.

For example, the idea that you ought to cause your mindless mind-chatter to be imaginatively ’embodied’, and see it all as you would another person.

The very idea is brilliant, for no other reason than that it’s immediate, and it achieves the desired outcome. Which is: Ceasing your identification with it. It gives you instant distance. That distance is a critical first step in finding joy in every moment.

The Untethered Soul‘s goal, so it seems to me, is to find your way back home. That ‘home’ is the place of flow. Of being a rock in a river, where that river is your life flowing around you and through you.

The text is built on a persistent repetition, which I guess is the bedrock of learning. It was faintly annoying, for no other reason than that it seemed to be an unnecessary way to lengthen the word count.

Then again, I did not come to this book as a beginner.

Perhaps beginners found it useful? Perhaps if you’re new to this way of thinking about the world, you can read it and let me know.

The Untethered Soul still managed to surprise me, despite its pitfalls and minor annoyances. It managed to paint a different picture of a set of philosophies and ways of thinking about the world that are as familiar to me as my well-worn monster feet slippers. I just didn’t need to own it.

As I returned the well-thumbed copy to the library this afternoon, I smiled in appreciation of the service.

I didn’t have to spend any money to gain the nuggets and gems from Singer’s work. I just had to be patient.

And then, to let my own preconceived notions go.

Which, after all, is the point of the book.

The Untethered Soul was released way back in 2007. Go see if your library has a copy. (It will have.)

2 thoughts on “[ BOOK REVIEW ] The Untethered Soul, by Michael A. Singer (New Harbinger)”