Jane Harper’s work The Survivors is a character novel thinly disguised as a crime novel. It is an engrossing, high-calibre read, artfully constructed. 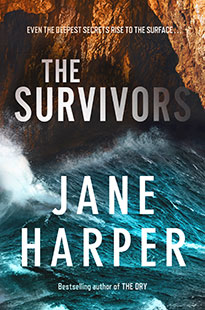 Jane Harper’s work The Survivors is a character novel thinly disguised as a crime novel. It is an engrossing, high-calibre read, artfully constructed.

Imagine, if you will, settling into bed with a nice book to read before you go to sleep. Your partner is knackered from a day of physical hard yakka, and is gracious about your lamp that allows you to read for a little while.

You figure you’ll only read a chapter or so and then put the book down. The only problem is, you don’t put the book down. By midnight, your partner decides the loungeroom is a better option, and you stay where you are, riveted, until after 2.00 am.

This was what happened to me when I read The Survivors.

The Survivors is my first experience of Harper’s fiction. Jane Harper might be a ‘best-selling author’, but that’s never an indication of a great read. It indicates a number of sales for a given work during its first week of release; and never the title on which the tagline is emblazoned.

This book has a pithy title. It is an apt description for the backstory of the book’s characters, each of whom were affected by deaths some 12 years prior to the events of this book. It is a feature sculpture in the small, Australian seaside town in which the story is located. And it describes an emotional arc of what it means to live when others do not.

The Survivors brings two characters, Kieran and Mia, back to the small seaside town from Sydney, to help Kieran’s mum (and Alzheimer’s-afflicted dad) move. Twelve years prior, the town experienced the worst storm in its history.

During the storm, Kieran had gotten into trouble near some off-limits caves. Finn, Kieran’s brother, took his catamaran out with his business partner to save him. But Finn and Toby died during the rescue attempt. At the same time, Mia’s best friend went missing; her body was never found.

Thus, when a tourist-resident is killed on the same beach, at the same time of year, it stirs up memories for the entire town. Suddenly, everyone is a suspect. Old enmities are rekindled. Friendships and families become stretched. The community starts to fray. Along the way, Kieran faces his own demons—and, eventually, some long-hidden truths.

Anyone familiar with a tiny Aussie town knows that this kind of desolation – due to long-held memories, fears, guilts, and resentments rather than a current event – is not unusual. People begin to show their true colours, and outsiders can often fail to understand it – as demonstrated in The Survivors by the dead girl’s parents. Harper’s use of an online forum in The Survivors allows her quickly to establish this kind of fall-out in a way that more people will grasp and understand.

While The Survivors is a speedy and enthralling read, it doesn’t carry a lot of what I’d call “action”. Rather, it’s the complexity of the narrative and its characters’ relationships that carry the story. On one hand, you have the central crime, and enough oddball characters to keep you wondering which one dunnit. On the other, you have the unresolved nature of what happened during the storm all those years ago. You can’t help but feel that the two might be connected.

The net result is an immensely satisfying story. The type that you can take to your own small seaside town this summer and devour on the beach in an afternoon. (Which, by the way, I highly recommend.)

If Harper isn’t yet a household Australian name, then give her a few years and a fistful of titles of this calibre. Because I’m calling it now: If she continues to be this good, she soon will be.

The Survivors is out now in Australia, and in February 2021 in the USA.

This review was first published in the Australian Arts Review and was syndicated on my YouTube channel, which you’ll find here.