One amazingly simple trick to improve your research paper

Here is a simple way to dramatically improve how you write your research papers and dissertations. 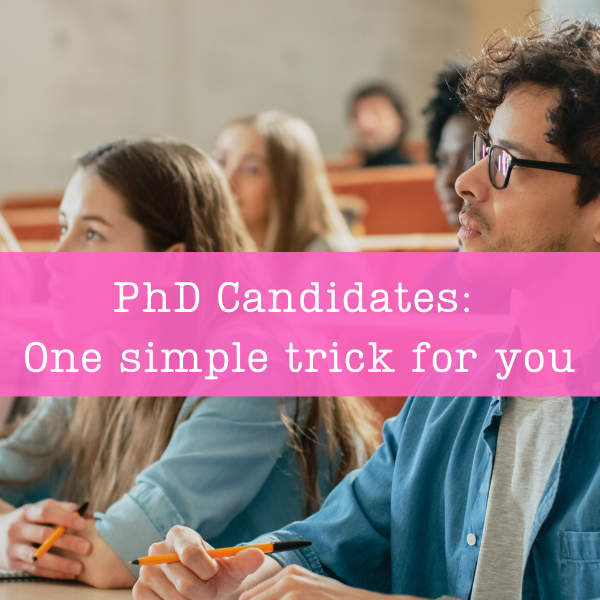 What’s one thing that many doctoral candidates have in common?

It’s a robust skill in their chosen disciplines paired with a substandard writing skill.

This is particularly the case in the sciences, in whose bedecked halls are Honours students who complete their degrees in groups. While group work has some fabulous benefits, it also has draw-backs. One of those draw-backs is that those students who are weak writers are often carried by the rest of the group. This is not a problem unless the student (maybe that’s you!) finds itself in a doctoral program, face-to-face with the uncomfortable reality that there’s more writing to do than there is research.

A doctoral degree is a phenomenal writing task. It doesn’t matter whether your assessment mode is via thesis or via publication, the volume of words you are required to pump out is immense.

How am I qualified to write this?

Before you ask, no I don’t have a PhD. I do have a partially completed PhD, which I ditched after getting bored and realising I was on the wrong path. (A doctorate is still on the cards, but for when I’m an elder and past the age of 70.)

I have, however, edited a huge number of research papers and theses. Many of them have been about fascinating topics, including engineering topics like cement paste backfill, flooding, concrete, bridges; and public health topics like the effect of drought on farmers.

I’ve been consigned students whose supervisors have despaired of ever being helped. One was quietly considered not to have much of a running chance; his eventual submission was one of the highest-scoring submissions to be turned in. One other one had a supervisor who cornered me in a corridor one day, saying with a grateful sigh, ‘You must have the patience of a saint’. Yet another was a student with aphantasia, whose fascinating inability to visualise left his research team frustrated beyond belief, and whose writing was doomed forever to begin at the beginning and cascade through to the point, under every heading, in every section, no matter how tiny, forever.

In each case, the solution has almost always been relatively simple. And once the students were taught this method, they have always been able to apply it proactively.

Every time you do it, you get better at it; eventually you can skip the analysis and simply begin to use it as you draft. Like a muscle, it gets stronger when you use it. This means that with consistent and diligent application to this method, your papers improve dramatically over time. It’s a vastly different experience from that wherein you hit the same roadblocks with every paper and get pushed down into the same rut over and over again.

Ok, are you excited? I sure hope so.

This method is analytical and it has two components

The first part is a headings analysis.

The second part is a first-sentences analysis.

This goes against the grain of everything many students have been told. They write their most important point in the middle, or the end, of every paragraph. What this method does is force you to lift that important point, that argument, that hook, right to the top one or two lines.

By doing this, you enable a few things to happen:

How to do it: First headings analysis

To complete your first headings analysis, here’s what to do:

In science papers, I often find that there is a section about a particular methodology that grows a life of its own. It becomes a standalone piece that interrupts the flow of the rest of the argument, when it fact it’s a more logical subset of another section. You can only spot this by looking at the headings contiguously, which is why the analysis is so important.

How to do it: First sentences analysis

To complete your first sentences analysis, here’s what to do:

In many cases, you’ll find that you have to rewrite whole sections, eliminate paragraphs, or completely rethink your approach to what you’re writing. While this sounds like a gigantic pain in the arse, what it’s doing is forcing you into the role of first reader without requiring you to put the paper away for six months before you re-read it. Once you eliminate what you expect to read, you’ll read what’s there: And that’s a huge battle when you’re inside your writing and research 24/7 for years on end. You can’t have normal conversations with people that aren’t about your research any more, so how do you expect to write and rewrite clearly? Riiiight, now we’re on the same page.

Common issues and how to fix them

There are a number of problems that I see over and over and over again when I edit PhD papers and theses. Here are a few of them, so you can see and fix them in your own work.

Your own research story is absent. This is most common in literature reviews. At their worst, literature reviews are annotated bibliographies: We see the reading that’s been completed, but there’s been little to no assimilation of the material. At their best, literature reviews are clear stories, with an argument that moves swiftly (and interestingly!) through a field of studies, effortlessly proving the need for the study in this particular shape. How to fix? First, really understand what you’re working towards. Beyond that, make sure you’ve got text under every heading! Every heading gives you the opportunity to keep that story moving: To pick up the threads of the prior sections, weave them into the introduction of the next section, and make them all work together. The literature then becomes the features of the fabric, rather than the threads holding it together. Your story holds it together, so use your intros to your benefit.

Topic sentences are buried, far, far away… This appears to be most common amongst students whose first language is not English; perhaps because formal English study doesn’t teach people to put their most important information up front. However, putting your most important point right at the beginning gives your reader no reason not to be hooked into the rest of the paragraph. They’re going to want to know the importance of this point, or how you got there, or why it exists. How to fix? If your style is to ‘bury the lede’, as the journalists say, in the middle or at the end, just pull it out and put it at the top. Then, proceed to rewrite the rest of the paragraph. You’ll find that you’ll naturally conclude your paragraph, enabling you to hook the reader with your next most important point in the paragraph that follows.

Failing to link literature to your research story or argument. There’s another fabulous ‘trick’, which is called, ‘so what’. Every time you make a blanket statement about something, throw the comment ‘so what?’ at it. For example, ‘John Citizen studied sewer flow in Tasmania in 1970.’ Who cares, right? How to fix? Ask the statement so what? and you see that it appears to have nothing to do with your own research. Rewrite to focus on your study, rather than John’s. For example, ‘This study focuses exclusively on square sewer pipes because John Citizen’s 1970 study of Tasmanian sewers revealed that square sewers block more often than round ones. Subsequent studies have…’.

Do you need help with your research papers?

I coach PhD students through writing issues, and edit both research papers and dissertations. If you (or your students, if you’re a supervisor) feel like you could do with some additional help, email me directly. You can reach me here, or via email at leticia [at] brutalpixie.com.

If you use these techniques, and have questions or comments, leave them below.

I’ll come back to every question and do my best to help. 🙂