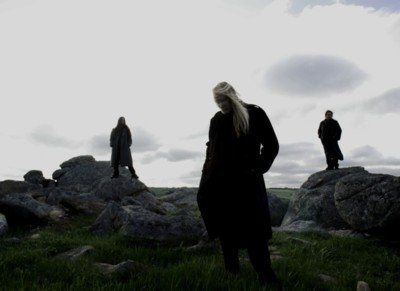 I’m posting this on its own, rather than as part of a news item, because I never get publicity material for my good friends’ bands and I was astonished to see it, quite frankly. Though I shouldn’t be. I should have learned by now. Mournful are amazing and they deserve every bit of publicity they get. So, thanks to Earsplit for this! And I hope you all rush out and grab these! In the meantime, I’m gonna try and badger these guys into writing some shit for me in the lead-up to their US tour dates later this year.

The Unspoken Hymns Track Listing:
1. Left Unspoken (new version)
2. The Epitome Of Gods And Men Alike
3. A Slow March To The Burial
4. Descent Of The Flames
5. Elemental (Thergothon cover)

The Unspoken Hymns is not just a great collection of MOURNFUL CONGREGATION material on its own, the release is also meant to help reintroduce the band to North American audiences in advance of their upcoming fourth album, The Book Of Kings, which 20 Buck Spin will release stateside in November! The follow-up release to 2009’s hallowed The June Frost LP — which claimed the #22 spot on Decibel Magazine’s top albums of 2009 list — The Book Of Kings is a highly-anticipated release for funeral doom and extreme underground metal fans alike.

Since 1993 MOURNFUL CONGREGATION have become well-known in the international underground metal scene as forerunners of the funeral doom subgenre alongside Skepticism, Asunder and scant few others as long time torchbearers of the unique sound. Involved in numerous other projects, including Stargazer and Cauldron Black Ram, 2011 marks an period of increased activity for MOURNFUL CONGREGATION, as the will also make their stateside live debut in support of the forthcoming album with West Coast dates in December, and culminating with a headlining appearance at the third annual Rites Of Darkness festival in San Antonio.