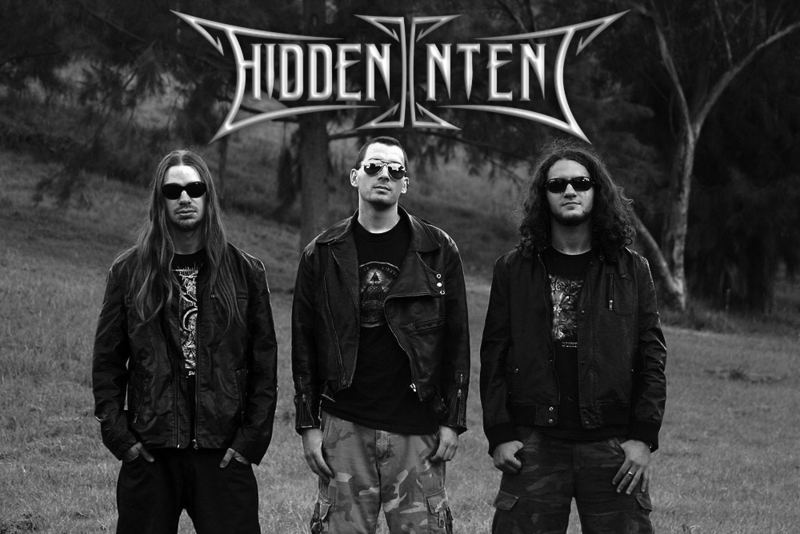 Hidden Intent play their first show, and prove that the future is in good hands.

I went out to see my one of the bands my other half plays in last night – IMMINENT PSYCHOSIS – which I roundly believe is Adelaide’s best thrash band. They were second up on the bill, and when we got there, discovered that the running order had been pushed back by something like half an hour.

Up ahead of them was a young band – HIDDEN INTENT – playing its very first gig. Always a tough show, your debut; but they had quite a crowd of supporters. What surprised the shit out of me was how good they are. It shouldn’t have, though. Hidden Intent came together in 2011 after their other bands fell over; so it’s not like they’re total newbies.

Watching this young three-piece, I was kind of like, oh yeah fairly standard stuff. The reason I wasn’t initially impressed was that the mix was muddy. It was at the Squatter’s and Forrester’s Arms Hotel in Adelaide, where the sound is usually wanting. Once I stood there, concentrated on what they were playing, and actually paid full attention, I realised what was in front of me. It was the future of good metal in this town.

Hidden Intent play thrash. Lots of people commented that it reminded them of SLAYER, but to me that is the most obvious and most boring comparison possible. Oh it’s a thrash band, oh they’re like Slayer. You know what large elements of their sound caused me to think of? SKELETONWITCH. It’s thrash, but dark. Everybody last night who thought of Slayer probably hasn’t even heard Skeletonwitch. I say this after talking about Skeletonwitch and getting total blank faces. Oh yeah, people only listen to things they know. Thaaaat’s right.

But back to the point. Hidden Intent play thrash, but it’s clear that they have some strong, and solid influences, from rock’n’roll, to old-school thrash, to new-school thrash, to black/thrash, to others in between. It’s clear in their song structures, in the way the riffs are built, and in the clear and careful placing of vocals (with the occasional twin-vocal attack). They do not sing over every riff. They do not play long, wanky, and unimportant solos. They do not resort to tactics used by many young bands who are merely imitating. These guys are writing, and they are writing original work, and doing it well.

One of the other big plusses for me was their lack of awkwardness on stage. They were having fun! I spotted a few fuck-ups, wrong parts of songs played: but I only spotted them through looks of amused anguish. I kind of thought ‘oh that sounds odd’ – and it was, because it was wrong. But it didn’t even trip them up or slow them down, and that’s something that more experienced players still occasionally have trouble with.

A mate of mine, Paula Rowe, who’s a metal connoisseur and metal researcher of excellent standing, commented to me: “The future’s in good hands!”. Absolutely, couldn’t agree more. I’d love to see Hidden Intent in a venue with a good mix, because I think they need to be given the justice of good tools to highlight how good they really are.

I have a couple of criticisms. The first is that they played for way too long. I can’t stand it when people play sets that are too long. And you know they’re too long when people start saying to you, “are they still playing?”. Keep it short, keep people keen. Don’t make them start yearning for a fag or a beer, or a conversation.

The second criticism I have is, despite how well these guys did for themselves, I could see that if they aren’t careful they are likely to fall into that trap of having song structures that are too similar: solos at similar times, riffs that kind of repeat, vocal patterns that become common. If Hidden Intent can objectively listen to their set (I say this, because I hope they record something fairly soon), and structure it in such a way as to avoid any kind of same-same, then we’re on a winner.

Well done, guys. I look forward to seeing you next time, because if you develop and progress at a rate of knots, you’ll very quickly become one of this town’s best thrash exports.