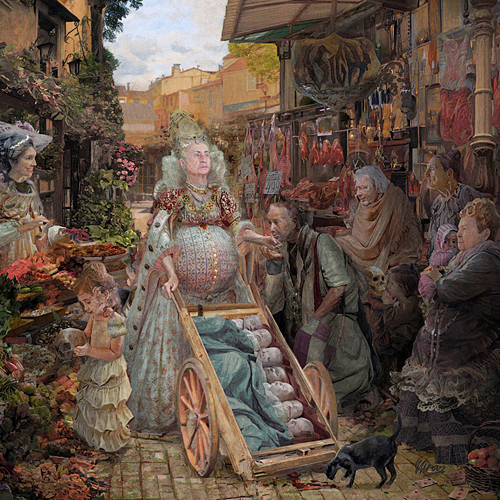 Oh, SIGH. The creepiest of the weird offensive Japanese black metal. Thou art amazing on the train.

Years ago, long after I first got into this band, I recall taking a copy of Ghastly Funeral Theatre to work and asking a Malaysian girl who spoke Japanese to translate some of it for me.

She refused to touch it. She looked at it once and then tremblingly stated, “No! Is too evil!”

I was well impressed.

Since those days, Sigh have produced some crazy soundscapes. They’re the sort of band that really ought to be billed on Future Music Festival for the sheer intellectualism with which they approach definitions of music, and of listener affect.

The only band that really comes close is Gnaw Their Tongues. And they are fucking amazing for this sort of shit, just in a slightly different way, coming from different roots.

I say all this after spending two train trips and the surreal walk to, and into, work, with Sigh’s latest, In Somnophobia, blasting in my ears.

Picture sitting on the train with intensely layered sounds playing all around you. Some of them you can’t quite touch. Some are from the circus. Some are from horrific movies. Some are sexy, hook-filled montage soundtracks. Some are evil, gothic, operatic soundtracks that occur in strange physical theatres. The remainder would not be out of place in an Argento film.

All of it painted with a brush redolent of the Sigh you know and love. Indeed, some of the piano pieces will be familiar to the Sigh fan.

I sat amongst tens of regular jackoffs, drifting to all sorts of places with this release. I wandered with the commuter crowds into my work building, mesmerized and unwilling to remove my headphones. The trip home after work was twice as exciting as usual.

If half the commuters had turned into pink elephants and started slaughtering each other, I was listening to the perfect accompaniment.

I’m still not done with this album. There is so much to it that it will take me months and months to feel all of its pieces.

True to form, this release is best through headphones. It loses a vast amount of its ouvre on a stereo. Seriously.

It’s just not short enough for a commute album, though. It’s long enough, and engaging enough, to do you for a couple of days. Or commutes and lunch. Maybe a week if you only listen to it on the train, and set to “constant absorption”.

But be warned that your brain will be playing with it after you’ve put it away and started work, so you’ll be ineffective for at least the duration of your first coffee of the day. Tell your colleagues you’re tired. They’ll believe you! They believed me!

This album is fantastic. Highly recommended – especially for the manic end of your working week.

SIGH’S IN SOMNIPHOBIA IS IN STORES IN MARCH 2012.