Tash York’s ‘These Things Take Wine’ is a comedic romp through the land of the 20-something woman with a love of wine… and is a lot more of a mess than she’d admit.

So, I have a confession to make. As I’ve gotten older I’ve started to wear heels and red lipstick and, uh, enjoy cabaret shows. Probably not a real surprise since being the little dance slut that I am, and (re)discovering dance forms like jazz, music, and tap at an indecently old age.

But in any case, I happened to be in the right place at the right time to win tickets to Natasha York’s show at the Adelaide Fringe Festival 2016, titled These things take wine.

To win the double pass, I had to caption a pic. Firing off the first thing that came to mind, I won! Awesome. Here’s the winning tweet: 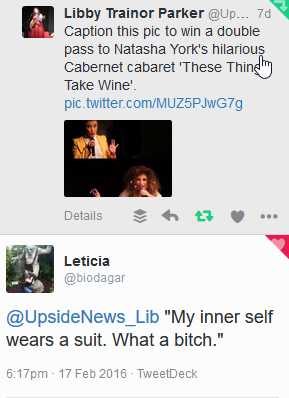 And so it was that I started asking my lady friends to be my date. Even though I asked my husband, I kinda knew he’d say something like fuck that to cabaret. Ha!

To be honest, I had a sense of what this show might be like, having done a quick scout, but what I wasn’t prepared for was the depth of character, the engaging performance, and the deep resemblance to a bunch of people I know.

Tash York presents that well-known woman in all our lives (maybe it’s us) who drinks a lot of wine. Who loves wine. For whom wine is the thing that is comfort and fun, and social lubricant, and comfort on a dark night. That woman who takes over karaoke, makes an arse of herself in public, is a bit of a (or total) slut. The woman who is really just trying not to deal with deep personal issues.

Because this territory is very real (hey, we all have friends like that), the comedy is meaningful. We guffaw at the indignantly arrested. We associate the awful karaoke performance with our own. We recall with glee the time that someone that we know did X, Y or Z represented on stage.

But beyond the story, Tash is a performance artist, and her artistry is finely tuned. The show is well written, and only as long as it needs to be. The songs are well chosen and have been carefully intervened in to drive the story, and the interaction between Tash and Ben is just balanced enough to surface elements that could otherwise rest with the audience. Tash embodies her character with a glee that it’s clear she finds hard to suppress.

And also – she has a stunning voice with a good range. And real balls, too. It’s a great show, and if you get to nothing else this Fringe, make sure you catch this one….. (and maybe the Bollywood Flashmob in the city on 5 March, which I’m in).

Tash York’s These things take wine is on at the Adelaide Fringe until 28 Feb 2016. Click here for more info & tickets.