The Integration Project: A novel

The second #LeticiaWrites project kicks off. It’s called The Integration Project, and it’s a book. In this post I talk through the process of finishing a screenplay and starting a book.

In last week’s update to you guys, I was super excited to tell you that I finished the Ultimatum screenplay! Woohoo!

Today, the first thing I did was print it and stash it – and all of the cards off The Board – in my projects drawer, where it is going to sit for about 90 days before I rewrite it.

Taking the cards off The Board I had a rush of excitement. I couldn’t do it fast enough. Remove! Remove! I wanted them all just off with a wave of my hand, but it took forever because I had to peel the cards off the board, then peel the blu-tack off the cards, and then grimace when the paper stuck to the blu-tack anyway, and then gather them all together. Then peel off all the sticky notes, and put them together. Then push them all into a cohesive, coherent pile.

I wrapped them in yellow paper, wrote the archival date on the outside, and put them into the Resting Drawer of my writing bureau, with the other projects that are either in progress or that are resting.

My husband said to me yesterday, ‘I think you should write a book’.

This was already my plan, as you know. My challenge at the beginning of the day is that I had the beginnings of a book in mind, and I didn’t know where it was going to go. Because it is fiction this time, I didn’t have the luxury of research in order to procrastinate.

After journalling my way through it, I realised that the idea I’d had in mind was a romanticism and not something that could work. It would have ended up being more of my own cogitation on the nature of Human, and wouldn’t challenge me enough.

As I journaled my way through the thinking today, I found myself confronted with a woman-overcomes-man-and-herself kind of story. I decided that writing a psychological drama or a feminist tract just wasn’t my thing right now.

So instead, I listened to my body.

I asked it: What is it that I need to be writing.

As I sat, a sensation emerged in my belly. It rose up and wrapped itself up and around the back of my neck, whispering in my ear. The sensation suggested quietly that I write a story about what happens when humans connect mentally and emotionally without language. If you’ve read any blogs here at [e]xpositio, you’ll know that this is part of my next-level-crazy, 100-year-plan.

The sensation asked, Where are we, in the end? How did we get here?

I journaled my way through a whole lot of questions. How do I write it? What perspective was it? How does the time work? Is it a biography?

The biography was enticing, I won’t lie.

So I wrote a paragraph about what this might be like, and the story just emerged. But there was one problem. There was no conflict.

So I wrote it again. I started with the word ‘maybe’. Maybe she’s working for a tech company…

Then every time I wrote a moment that I could then consciously recognise, I wrote ‘yes’.

I wrote for nearly an hour, and suddenly I had almost five pages, right through to The End. It felt good. I know that there are some things that I need to research; one of which is to go back and read the article that I saw briefly last week about some scientists that have created a way of connecting brains so that they can share thoughts simultaneously. Yep, that’s really a thing.

This took me up to lunchtime. There was this niggling sensation that I there were gaps and problems in terms of not enough conflict. Here’s what I wrote to myself:

I feel like there are gaps and problems in terms of not enough conflict, not a strong enough resolution, not enough of a reason. But maybe that will fall out in the writing. Maybe the story will change.
Right now all that matters is that I have a story – one that is long enough and complicated enough to make it into a proper-length novel. One that I can put on the board.
So I guess it’s back to The Board. Time to do the work to map this baby out before I start writing it. This way I can work out what kinds of research I will need, but given it’s fiction at this point, I can simply write and back-fill wherever I need to back-fill it.

Here is what the story looked like when I mapped it to The Board. 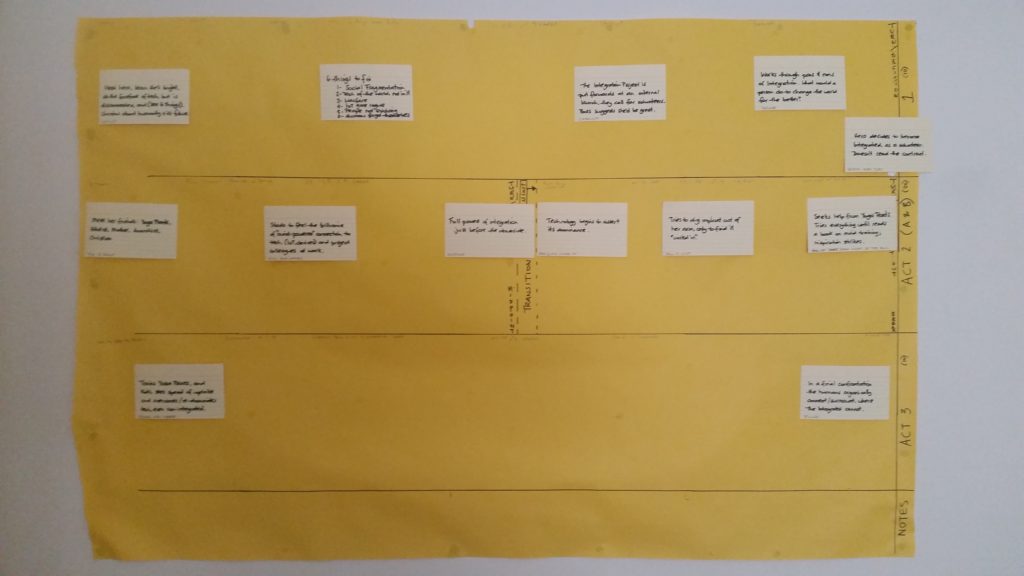 I wasn’t wrong about the gaps! Or the lack of conflict!
In fact, it reminded me of what happened with Ultimatum. It’s also something that is talked about in Save the Cat, too: That you have this amazing idea but when you put the story on the board, it’s mostly gaps. You have no idea what’s going to happen in Act III. You might have an opener, you might have some turning points, but actually you don’t have a story.
Unlike Ultimatum, The Integration Project feels much more organic and less structured. But that may be because it isn’t a researched story, and I am feeling my way through it much more. Actually, entirely.
This was where I went back to the writing journal to put my thoughts ‘on paper’ in order to find the resolution through Act III. Doing this, I realised that the story is not about learning new things, but in letting learned things go.
At this point I went back to The Board and added some more cards. In doing so, I discovered not just the story of the heroine but the sub-story that drives the conflict, and why it becomes urgent. The final Act really does have a sense of urgency now. I’ll show you: 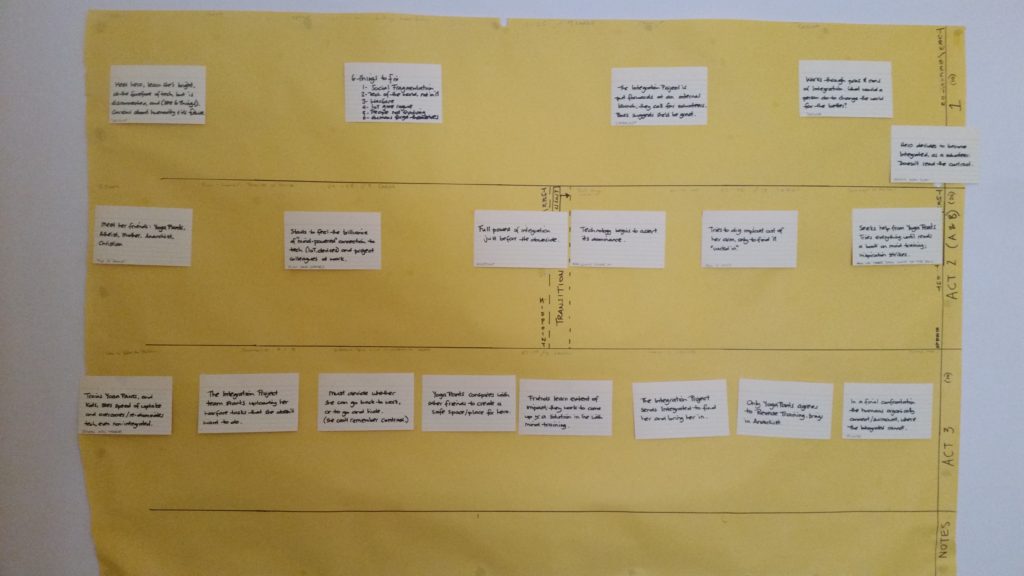 Pulling these cards together, I re-sequenced the very first sequence that emerged when I sat down and the muse first spoke to me. I created a looped sequence so that the ends are resolved, but the heroine ends up much different – and much stronger – than she was at the beginning. She becomes dangerous, rather than compliant.
What I want to do in this variation of using The Board as a method is to avoid mapping every single element in the story. It’s going to need to be flexible. It may even be so flexible as to change dramatically. Writing too slavishly to The Board may not result in the level of detail, in the extent, that I’m looking for in a novel-length work, because novels really are super long! We are looking at an average of 300 pages.
In Ultimatum, writing to The Board resulted in such a conciseness in my output that instead of a 110-page screenplay, I only have 46 pages. This could be because it is mostly dialogue, with very little direction and almost zero camera direction for example. So that is extremely likely to change in rewrites, but that’s where the first draft is and it’s not where it’s going to stay.
With this book, I am keen to keep things reasonably high level on The Board, and also to use The Board as a method of capturing the story. That capture will encompass new thinking, new elements, and ideas – they’ll go on the board as I start to write.
You could argue that using an electronic board is better, but of course I’m going to argue against you. Writing by hand, standing and thinking, interacting in person, is so much more powerful than doing things on a computer screen.
I also have an initial log-line for this story. I’ll end this instalment here, with the log-line. But, you guys, I am so excited to get started. Next week will be kick-off. How amazing that fiction is so fast to begin!
The Integration Project
A volunteer in a tech company agrees to be one of the first to be integrated with its bleeding-edge technology. As the technology begins to dominate her against her will, she decides she wants out – but getting out is both harder and more empowering than she imagined.