The Divine Matrix is a simply written exploration of the nature of life as a hologram, and how to work with it. Applying its principles to our current world is as confronting as it is enlightening. 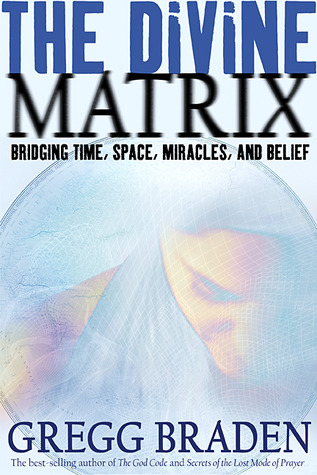 The Divine Matrix is a simply written exploration of the nature of life as a hologram, and how to work with it. Applying its principles to our current world is as confronting as it is enlightening.

If you’re a fan of Deepak Chopra then you’ll have heard Gregg Braden bang on about his view of the world for a long time. This book is not new; it was published in 2008. But now is a good time to read it. (Or, if you’ve already read it, to re-read it.)

The reason is because The Divine Matrix explains why and how we’re living in a holographic universe; what it means to you as a human; and what it means to unlock the magic of working with it.

The notion of a holographic universe can be confronting for some; can weird out others; can simply shut people down. But Braden’s arguments for it are compelling. They are compelling because Braden positions himself as a person who doesn’t just accept any kind of narrative, a no-bullshitter, a Man of Science. He is science-trained, and has worked in scientific and technology industries, so he does know how to evaluate evidence. Additionally, in the great practice of rhetoric, Braden’s career (to which you can add counselling) makes him appear to be authoritative when he writes about this stuff, whether he is or not. Now, that sounds rough but I state it because it has to be stated by someone; if I don’t, then someone else will.

Braden’s book, like his lectures and seminars, uses story to introduce, illustrate, and teach. It’s an excellent and relatable model, especially for complex concepts like nonlocality. However, if you’ve seen any of his videos in the past ten years, none of the stories in The Divine Matrix will be new to you, so may feel tired.

One thing that Braden has a gift for is relating deeply complicated concepts simply and effectively. The way he describes the ‘nothing’ of space as a holographic matrix makes it difficult to argue against.

It was fascinating to me that while I was reading this book, my husband started talking about The Mandela Effect. While that concept wasn’t even touched on by The Divine Matrix, it occurred to me that if changing one thing in this reality ripples change through past and future, then The Mandela Effect could have some real foundations. Or rather, it would if most of the moments presented by Fiona Broome’s website weren’t clear indications of people mishearing, misreading, or being ignorant about things.

Unlike many works of this nature, Braden takes the time in the second half of the book to point out the ways in which you can change yourself in relation to the world. Based on a hologram model, changing yourself does change the world.

I mentioned above that now is a good time to re-read this work.

At one point, Braden writes:

In a universe that mirrors our beliefs, it’s clear that angry people can’t create a peaceful world.

The Divine Matrix, by Gregg Braden

He couldn’t have known about the fierce fights going on in 2020, when he wrote and released the book. Not only have we seen that fighting, riots, and anger don’t achieve anything much except pissing people off, we’ve seen that all they create is discord and violence, and more division.

Similarly, the increasing separation and division of humans into teeny little boxes of traits over the past five to ten years—sex, who they have sex with, skin colour, economic status, employment status, voter status, etc—and the resulting shifts in language, perspectives, and the fierce emotions that have played out as a result of it all of those exhortations, could easily have been the first sets of ripples that resulted in this year’s forced isolation in populations.

After all, the language of the universe, according to Braden is emotion:

… emotion is a language unto itself, the very language that the Divine Matrix responds to. When we feel as though we can’t achieve our biggest dreams, the Matrix simply gives back to us what we’ve given it to work with: delays, challenges, and obstacles.

The Divine Matrix, by Gregg Braden

If you just walk up to someone in the streets of Melbourne and tell them that they have to stay home, away from literally everyone else (or only go in public with their faces covered so nobody can relate to them), because humans have been so worked up about being put into little boxes, about being made unique, isolated from everyone else, you’d be locked up in the loony bin. Yet in the context of Braden’s work it’s not far-fetched at all. The emotions inspired by fights and trolling online in that space have called forth the most intense emotions in people.

To put this more traditionally: What you sew, so shall ye reap.

Braden makes the very optimistic point that society is where it is because of the lessons learned. That if it’s bad now, it would have been much worse if we hadn’t learned what we’ve learned. That the changes we make now reverberate throughout the past and the future because it’s all now anyway.

The challenge with this is that you can be seduced into imagining that the lessons are long-term, rather than short-term. Five years isn’t the same as fifty years. Yet five years is a long enough time in which to cause change in the world.

If all of this seems like an uncomfortable red pill, that’s kind of the point.

It’s uncomfortable until you realise that changing yourself actually does change your world. This happens because shifting even the tiniest piece of a hologram shifts the entire hologram. It’s also why you only need 0.01% of a population (if I remember correctly) to create a change in themselves in order to make change on a vast, social scale—even through meditation.

Happily, Braden provides a meaningful guide to spotting opportunities for change, and then a guide for actually changing.

I’m going to cast a huge generalisation here: Most books of this nature don’t offer meaningful action. They tend to waffle around the subject all knowledgeably without giving the reader something to do as a result of their knowledge. The Divine Matrix is not one of those books. It does have meaningful steps you can take, shows you how to spot those opportunities, and reminds you constantly that it’s not in what you say to yourself, it’s in how you feel that matters. This is also the subject of his other book Secrets of the lost mode of prayer. (Which I haven’t read yet, to be clear. Some of it is included in this book.)

The Divine Matrix could easily have fallen into the fluffy, non-practical spectrum of books. But, thankfully, it didn’t.

What I would like to see, though, is more of an analysis of world events through the lens of The Divine Matrix. I don’t care if it’s Braden who does it, or someone else. But if this model of the world is robust, as evidence is starting to suggest it is, then a regressive analysis of world and cultural events ought to be possible.

The isolation point above is an obvious one.

But commentary on trends of downward markets, business closures, increasing population control and restrictions… each of these, in a Matrix model, was presaged by populations about something.

And, also according to this model, it wouldn’t have to be by many people. Just 250,000 in Australia; 308,401,808 in the US; 631,000 in the UK. That’s easy if you look at social media numbers: There are apparently 186 million active users on Twitter and 2.6 billion on Facebook; and both platforms actively shift users’ feeds into negative, violent, and divisive content.

Perhaps it would be the ultimate test of Braden’s hypothesis.

If, as he says, ‘in order to change our world, we must alter the programs that make sense to reality: Feelings, emotions, prayers and beliefs’, then the first step beyond changing ourselves is reconnecting with real people in real time, and leaving the negative sink-holes of digital reality to wither and die.

According to Braden’s hypothesis, there’s a real chance that failing to do so will be the cause of an even more unpalatable reality. Perhaps what it means is that if we’re going to level up humanity, we each need to take more responsibility for how we feel.