REVIEW – John Garrett: What’s Your “And”? Unlock the Person Within the Professional (Page Two Books)

John Garrett is a comedian and speaker, whose podcast What’s Your “And”? features professionals talking about their hobbies. This book is the result. 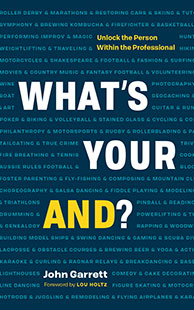 John Garrett is a comedian and speaker, whose podcast What’s Your “And”? overflows with fascinating conversations with professionals about the hobbies that make them who they are. This book is a result of those hundreds of amazing conversations.

It’s best that I put a full disclaimer up front: I have been a guest on John Garrett’s podcast, which was one of the most fun and entertaining podcasts I’ve ever had the opportunity to grace.

Garrett makes an engaging and conversational host, which I suspect is more because of his And than his profession. (He works as an accountant.)

John Garrett prefers to talk to you about who you are and what you do outside of work, than what you do for a living. He’s like this because he loves people. His  curiosity about people shines out of this book over and above anything else.

Garrett’s absolute love of, respect for, and interest in humans drives the entire book, in much the same way as AC/DC’s rhythm section drives the rest of the band.

What’s Your “And”? argues that people are people with interests before they are professionals. It shines a light on the rockstars who think of themselves as other than their professions, while highlighting the benefits (like happiness and productivity) of allowing people to be who they are, and championing personal sharing. The book is really for those in staid, grey, boring firms who are torn between their fascinating and fun personal lives and the work they’re good at.

Its entire undercurrent is: People work to live; they don’t live to work. It’s a statement that resonates with all of us, though many of us feel like our lives are lived with that equation running back the other way, under bosses who expect us to be ‘always on’, and colleagues who rejoice when we’re always ‘busy’.

For some reason, I’d had an expectation that What’s Your “And”? would be more in the vein of a Tim Ferris-type publication. A kind of Tools for Titans for hobbyists with professional lives. Instead, What’s Your And? is more about business and culture than about the stories from Garrett’s podcast.

As someone who’s read enough business books to fill multiple bookcases, I found the narrative to be fairly samey.

Though if I’m honest, what I really mean to say is this:

I read the narrative of the book quickly so that I could indulge the snippets included from Garrett’s past interviews.

And those snippets? I read them slowly, lovingly, multiple times.

Like the story from magician Mark Lee, who described being remembered 20 years after a work event because of his magic tricks.

Or the amazing story of the fiddle students who, after discovering each other at work, are now kind of in-firm famous as the two fiddlers.

Or the ship-in-bottle builder whose desk displays are serious conversation starters.

In each case, it’s not a person’s capabilities or work-related achievements that have created new, robust friendships and connections. It’s what they do outside of work that makes them so interesting that it draws others in.

As Garrett points out, ‘If you truly want to call yourself a “trusted advisor,” you’re going to have to be interesting’.

What’s Your “And”? is essential reading for anyone who feels that they can’t reconcile their working lives with their personal lives. It will give you the confidence to know that your personal life is truly interesting; and it will help you find ways of unearthing the Ands of those with whom you work.

Similarly, if you’re worried that your hobby or art will harm your career in some way, this book will show you that the reverse is often true: Hobbies shared create bonds that support careers, workplaces and happy teams.

And if nothing else, What’s Your “And”? will inspire an interest in other people. You might be surrounded at work by people whom you think are just like you. But ask a few questions, and become interested in the answers, and the results may just blow you away.

What’s Your “And”? Unlock the person within the professional is published by Page Two Books and available from Amazon.

This review first appeared at the Australian Arts Review on 13 October 2020. You’ll also find it syndicated on my YouTube channel.