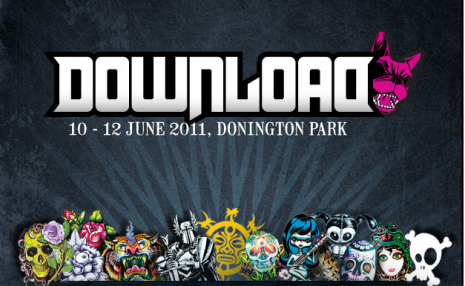 Well ‘Hello’ friends and followers of Biodagar, I’m Claireodactyl and having just returned from this year’s Download Festival, I thought it would be good to share the experience with you all. We started the weekend wet and cold thanks to heavy rain while we were setting up the tent and trekking the 2.5 miles between the car and the campsite! But then, as someone said to me, us Brits don’t go to festivals for the weather… if we did we’d never go to one!

I could drone on about every band that played, but let’s be honest, that gets pretty boring… so let’s go for the highlights!

The evening sets were kicked off with ALTER BRIDGE, now while they aren’t strictly metal they are one of my favourite ‘easy listening’ bands, Mark Tremonti is a killer guitarist, and you can tell by the way he plays that he just wants to rip it up and go full on metal with each song. Someone once told me that Myles Kennedy is a pure musician, nothing gets in the way of his music, and this is evident in the way he plays and sings. He pours heart and soul into each and every word and note.

The newly reformed THE DARKNESS were on the main stage whilst KORN were on the second stage. There wasn’t even a question of which band I was going to see, The Darkness are a close second to MY CHEMICAL ROMANCE in my most hated bands list! Last time I saw Korn some stupid mare had decided she wanted to beat me up (which she failed miserably at)! Jonathan Davis walks up to his highly recognised mic stand and hollers out the famous words “Are You Ready” and the crowd went wild. I always find the mix of people who like Korn fascinating, you have the grungers, the stoners, the metalheads, the rockers,  the bikers, the punks, the old and the young! I love that a band can bring together such a diverse mix of people. Their set was fun, and to make sure they got through all of their favourites, they  did a 10 minute mash up of their most popular singles at the end of the set which sent the massive crowd jumping, rocking and hollering along.

I believe that SKINDRED are by far one of the most undervalued bands around on the UK metal scene. Vocalist Benji Webb, is the perfect crowd pleaser, walking onstage with a Union Jack jacket on he proceeds to hype the crowd up and get them jumping and singing along to new and old songs. With added fun such as getting the entire crowd to robot dance at one point, and wave a piece of clothing above their head at another point, the originality and pure genius of this band make them one that everybody needs to see live at least once.

AVENGED SEVENFOLD have been a band I’ve followed for a long time, from their Nu Metal roots through to the more sold thrash style they’ve grown into. They are easily a band who will become legends of our time. Their songs are strong, emotional and epic in proportion. Their live show included blasts of fire, fireworks and emotional statements about their deceased band mate The Rev. It is clear that this band have been hit hard by his death, we’re now 18 months on from his death and they are still completely devastated by his loss. The emotion in their music hits home and even the older songs took on a new level of meaning.

The moment everybody was waiting for finally came, after a slight delay due to technical problems, the curtain dropped and there they were, the UK comeback of SYSTEM OF A DOWN. We had parked ourselves at the lighting and sound rig, but the crowd went as far as we could see in every direction. This was the first time I have ever heard the crowd drown out the sound of the band, every time they started a song the crowd joined in and the sound was epic. They got through almost every one of their songs, they were ripping through each song at epic speed, which is saying something given how fast their music is anyway! Their stage set was simple with moving lighting rigs, this is a band who totally believe in their music and don’t feel the need for any theatrics. The set was legendary and one people will talk about for a long time!

Unfortunately we had to leave on the Sunday meaning we missed TURISAS, BULLET FOR MY VALENTINE, and ROB ZOMBIE… which, believe me, devastated me!