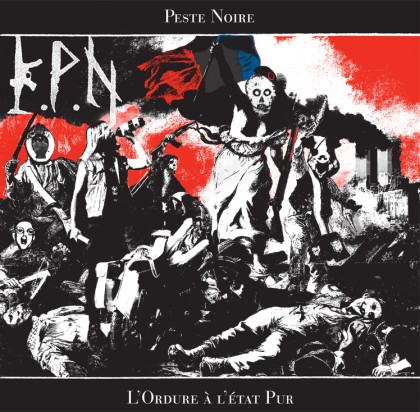 Been a while huh! Here’s the metal news that I’ve fallen across lately.

STOCKHOLM, SWEDEN – Swedish progressive metal titan Katatonia has announced its return to North American shores this fall. Katatonia will join fellow countrymen Opeth on a six week run, dubbed the “Heritage Tour”, which will conquer over 30 cities across the US and Canada beginning in September.

“Both you and we know that North America damn well deserves to see more of Katatonia, right? So how could we possibly resist heading back to the states this fall when Opeth are giving us the opportunity to be their special guests? It was just a matter of time before it had to happen again. Yes we toured together in the same formation ten years ago in Europ,e and not only was that tour very well received by both bands’ fans, but we also shared a great ride together as long time friends. Some people have even been calling this bill their ‘dream line-up’, so it’s only fair that the loyal fans in North America now get their piece of the cake too! So come out and see us on this great tour and remember we’re playing headlining sideshows as well! Looking forward! Cheers!”

Katatonia last toured North America in the fall of 2010, a headlining run on the “Night Over North America” tour, in support of its 2009 release Night Is The New Day.
The band recently celebrated its 20th anniversary as a leading light in progressive heavy metal.
Stay tuned for more information on Katatonia and the “Heritage Tour”.

GIVE PRAISE RECORDS tell us about their new releases!

THE AFTERNOON GENTLEMEN – Pissedography CD
After a righteous amount of singles and split 7″s, these fine lads from the UK are back to destroy your hearing and curse all friendly hearts! Seriously angry, raw, blasting fastcore along the lines of Spazz and Hellnation. Get pissed; die slow!

HELLCORE – Destruction Of The World CD
Brutal, angry, growl howls from the sewer pits of Indonesia! Raw, guttural grindcore that will stew in your head until you bleed puss and metal!
DOUBLED OVER/ROSKOPP- Split 7″
DOUBLED OVER starts their side blasting through dirty, bloody, brutal fucking riffs! And it doesn’t stop. Ever. These Aussie’s know how to play grindcore, in a way that takes you back to California in the mid ’90s. Super tight. Super fast. Super heavy. ROSKOPP‘s side is some of their best material to date. It’s like they don’t know how NOT to play fast. The drums are some of the fastest, most blistering you’ve heard from any band of any time. The guitar work reeks of early Regurgitate, and the vocals are as low and guttural as you can get, occasionally complimented by screeching highs. ROSKOPP make some of the most honest, pissed off grindcore in the world.

To get your hands on any of the above, visit the Give Praise Records website</a>.

“It is with great pleasure that we can release ‘Eternal Empire’ from our upcoming Five Serpent’s Teeth album for your listening pleasure.  It was very difficult to pick a single track to showcase the vast diversity included on this album, and I think this one is a good medium to show the direction we have gone with on FST.  I can’t wait for you to hear more of the album as, like I said, this album goes through quite a lot of different moods and emotions, in terms of feel and direction, yet is still rooted in the ‘Evile sound’.  The awesome Daniel P. Carter of Radio 1’s Rock Show will be playing the radio debut of the track TONIGHT on BBC Radio 1, so tune in!  We will also be showcasing another brand new track at Download Festival this weekend.  Lots of Serpent’s Teeth coming your way!  See you on that road soon!”

View the flyer for EVILE’s upcoming performance at Download Festival at http://earacherecords.com/myspace/evile_download2011.jpg

UK fans can also listen out for “Eternal Empire” tonight (Monday, June 6th) between midnight and 2:00am on the BBC Radio 1 Rock Show with Daniel P. Carter.

CEREBRAL BORE will be performing on the Sophie Lancaster Stage, and playing alongside a bill that includes the likes of MOTORHEAD, MORBID ANGEL, AT THE GATES and more.  Bloodstock takes place at Catton Hall in Derbyshire from August 12th – 14th.

“BLOODSTOCK!  Fuck yes!  I’ve heard so much about this festival, and in all honesty I never thought we’d end up on the bill.  Really looking forward to sharing the bill with Lemmy’s wart, Morbid Angel, At the Gates and Napalm Death – it’s gonna be a great way to welcome us back to the UK after our US tour and, after a bunch of festivals across Europe, it will be awesome to finally play one on home soil.  As one of the most brutal bands on the bill, you can expect that we’ll go all out for you, a full-on fucking annihilating performance.  Come and see us on the Sophie Lancaster stage, or don’t and regret it forever.” 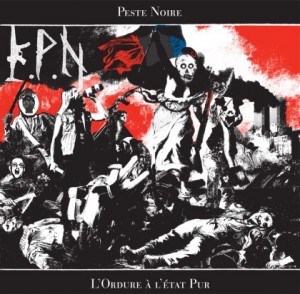 PESTE NOIRE has undoubtedly marked the landscape of underground black metal since the turn of the millennium. Anyone who’s heard the band’s first demos will agree: something unique was brewing in the caverns of Avignon during those early days. Now, with four full-length albums under his belt, La Sale Famine de Valfunde has brought his vile, raucous black metal from the deeps of the rural France to the streets, where the battle rages on.

The band returns with latest L’Ordure à l’État Pur, that is, in typical PESTE NOIRE fashion, wormy, muddy black metal for derelicts, ingrates and scoundrels. A mixed bag of Filth and Tradition brought to you by the one and only, DJ Famine. Jewel case CD features a 24-page color booklet.

North and South American residents can pre-order the album directly at: http://mesnieamerique.com. A sample of the album can be heard on the page as well.

Individuals ordering from outside of the Americas should visit La Mesnie Herlequin’s website at: http://www.lamesnieherlequin.com.

Old school metal masters Forbidden are smashing their way into Australia this July for the very first time.

Set to play 6 massive shows in support of their latest album ‘Omega Wave’, (Nuclear Blast) Forbidden fans have been waiting over a decade since their last offering, and Australian fans have waited over 20 years for them to make their way Down Under.

Kings of the second wave of the Bay Area Thrash scene, Forbidden were most popular during the late 80’s and early 90’s for their own brand of technical thrash metal infusing odd signature timing with melodies, making them one of the most original metal bands of the time.

With former members later joining some of the most sucessful metal bands in the world including Machine Head, Exodus, Testament, Nevermore, Slayer, and Death to name a few, Forbidden have been the breeding ground for some of the worlds greats including Rob Flynn, Paul Bostoph and Gene Hoglan.

Metal fans from all over Australia are set to witness some of the best thrash metal they will ever set eyes and ears on!