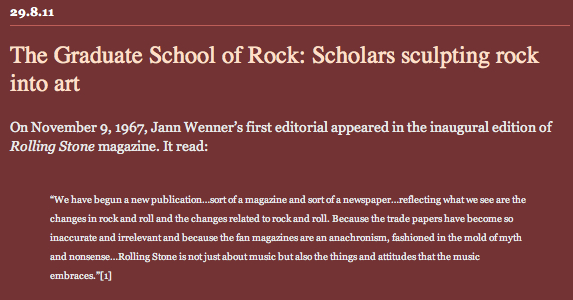 Written by Tom Valcanis. Here’s his second essay in our collaborative essay project.

“We have begun a new publication…sort of a magazine and sort of a newspaper…reflecting what we see are the changes in rock and roll and the changes related to rock and roll. Because the trade papers have become so inaccurate and irrelevant and because the fan magazines are an anachronism, fashioned in the mold of myth and nonsense…Rolling Stone is not just about music but also the things and attitudes that the music embraces.”[1]

By imbuing it with an authority of publications of record similar to that of newspapers, Wenner laid down the charge for all “serious” rock music magazines that endeavored to present rock music as serious instead of frivolous, a part of the real experience of a culture instead of mere entertainment – as intelligent art as opposed to vacuous “pop.” Throughout history, popular and folk music has been defined in opposition to classical “art” music. Prior to the 1960s, pop music could not be considered high culture like the great classical canon – it was commercial, trashy and intended for the lowest common denominator. But rock, like jazz and folk before it ultimately gained merit for its inherent artistry, bringing it to bear scholastic examination.

Scholars and rock journalists’ unifying contention in the early era of rock was that the music mattered in a way that “surpassed pure entertainment, breeding an equally strong need to understand and explain why this was so…in the critics’ view rock was as much art as jazz, but like film, far more democratic.”  Cultural theorist Tim Wall cites the academic scholarship of Black American blues music of the 1940s as hugely influential on mainstream American and European popular music of the 1950s and 1960s which eventually was applied to rock music.  Rock sociologist and critic Simon Frith devotes the first chapter of his landmark text on rock music and subculture Sound Effects to “rock roots” from both a sociological and musicological perspective as a launching point for academic analysis. Frith describes rock music as an art form that is “primitive” insofar that rock musicians impart emotion through pre-linguistic devices such as sounds and rhythms. He contends that “rock music is the result of an ever changing combination of independently developed musical elements, each of which carries its own cultural message.”  Rock and roll came into its own in the 1960s during a re-appropriation of Black music such as soul and pop through interlocutors like Chuck Berry who then went on to influence the Beatles, “opening up the space for the development of rock music” by further appropriating Black American blues, soul and of course rhythm and blues (R’n’B.)  Prior to the 1967 Wenner moment, rock music was largely ignored by the establishment, especially in Britain. The BBC had not ventured to play rock music which was instead broadcast by pirate stations and others such as Radio Luxembourg. John Peel, a DJ for pirate station Radio London was considered by the rock music subculture as one of their consecrators and eventually was “poached” by the BBC to head up its new pop music radio station, BBC Radio 1.  This motley collection of “fans” became a “real,” structured hierarchy – there were consistencies in the dress, style, taste, politics and activities of these people that consumed and produced rock music. Outside observers could easily identify rock fans; it was the beginnings of an expressive rock subculture.

CLICK HERE TO READ THE FULL ESSAY. Do it, do it, do it! It’s awesomeness.