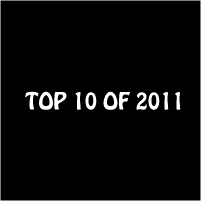 I hate doing Top 10s. I really do. Somehow I have always gotten away with avoiding it, but this year I have seen so many abortions of lists that I couldn’t avoid it any more.

I agree with GrimKim’s statement, “there’s more to life than Mastodon”. But I’m not as far down the depths of blackness as that gorgeous woman, so much of what you’ll find here isn’t so obscure that you won’t have heard of it. What you will find, however, is a list that is personal to me, in terms of what I dig; but I also ain’t gonna suck up to anybody. I would have included Mastodon on my list; but I’m not enough of a fan. Their release was awesome, but more stuff beat it to the post for me.

2011 has been an ace year. There have also been some startlingly godawful releases (ahem, Loutallica and Morbid Angel…). Maybe I should do a “bottom of the barrel” list as well. 😉

Without further ado, here’s my list. It took me ages to pull together, because I couldn’t remember exactly what came out this year. I had to go back through demos, promos, iTunes lists, and release schedules. When I went back through things, there was a whole lot I hadn’t given the time to. But there is also a whole lot that I didn’t realise was this year.

PLEASE NOTE THAT THIS LIST IS NOT IN ANY PARTICULAR ORDER, and is not numbered for a reason. The albums on this list are simply some of what I consider the best, sliced off the top of a whole lot more.

While Heaven Wept – Fear of Infinity (Nuclear Blast)
Quite simply, this is the most beautiful, emotional, epic power/doom release of the year. I adore While Heaven Wept, and even though they are now on a new label, with a new singer, and lots has changed for them, they are still producing extremely excellent work. While Heaven Wept is a lesson in how to write, and their work should make young musicians stand and pay attention. Fear of Infinity easily ranks among WHW’s best work for me, even though for a start I wasn’t sure whether it could compete with Vast Oceans Lachrymose. It doesn’t compete, it stands alongside.

Mournful Congregation – The Book of Kings (Osmose)
I have to include one or two local releases in my list this year, and if I’m going to do that, then I cannot not include Mournful Congregation. Earsplit PR are pushing these guys as the “grandfathers of funeral doom”, a genre classification which I know they dislike, but it’s true. Mournful are forerunners of this genre. I really loved The June Frost, their previous release, and while I haven’t given The Book of Kings the luxury of time that it needs, it’s already way up there. Beautiful work.

Assaulter – Boundless! (Metal Blade)
The second local inclusion on my list this year is Assaulter, thrashers from the NSW central coast. I was privileged to see them play Evil Invaders earlier this year (they’re excellent live), and got home to find myself pleasantly surprised to see them on Metal Blade. This album’s production could be better, but as far as blackened thrash goes, these guys are world-class. Of course. This album is right up there for releases this year.

Vomitory – Opus Mortis VIII (Metal Blade)
On first listening to this release, I was all grins. Vomitory presents, with Opus Mortis VIII some nicely written, fast-paced, catchy, riff-driven and rocking death metal. It’s not often you find a release like this any more. It has some fairly typical hooks, some reasonably common song structures, and if you listen to it too much, you run the risk of getting bored. But when this album hit my desk, it was like a small reprieve from some of the other wank that’s out there. Because sometimes you just want some straight-up death metal and Vomitory deliver what they promise. Nice work.

White Wizzard – Flying Tigers (Earache)
I do love classic heavy metal. People seem to have forgotten White Wizzard in their lists this year. I fucking love this album, and I can’t see how Anthrax’s new piece of boring can beat this! Yeah, fair enough Flying Tigers gets a bit waffly in the middle, but it’s hard-driving, head-banging, fist-thrusting, sing-a-long, heavy metal of the absolute best kind. I’ve never been disappointed by White Wizzard and this album is no exception. Lately it’s been the only album on my stereo. On repeat!

Cauldron – Burning Fortune (Earache)
That other traditional heavy metal band that I’ve been spinning this year is, of course, Cauldron. Canada, can you ever do wrong in metal? Nope! Cauldron is a young band playing traditional heavy metal like they were there in the beginning. It took me a while to get into Burning Fortune, after Chained to the Nite was such a classic, awesome album. But it got there in the end. Like many of 2011’s growers, once it’s under your skin it’ll take over. I love this release.

Anvil – Juggernaut of Justice
Readers of this blog already know that I’m a big Anvil fan. I was so excited to get Juggernaut of Justice. It’s the typical Anvil sexy riffs and big grooves that we’ve all come to know and love from these oldest of the old-school thrashers. What more can be said? I honestly think that Juggernaut of Justice stands alongside Metal on Metal as an Anvil classic: just with better production and more maturity. Score!

Burzum – Fallen (Byelobog Productions)
I am a right sucker for beautifully written music, and I suspect that it comes from the fact that I am a classically trained musician myself. Enter Burzum’s latest release, Fallen. And if any band is writing music that hits this chord with me, it’s Burzum. I’ve always liked Varg’s music, but this release gives me shivers along my arms. I really firmly believe that, with age, Burzum is simply getting better. Like many of the oldschool, I loved earlier works by Burzum, too, (Det Som Engang Var, anybody?); but Fallen exhibits a maturity of songwriting and presentation that is damn near unsurpassable. The second track, Jeg Faller, fucking well blew my mind when I first heard it, and it continues to do so. The structure, the placement of the vocals, the performance of the vocals, the writing style… Amazing.

Iced Earth – Dystopia (Century Media)
I got to Iced Earth late, with their Something Wicked series. But I fell in love with this band. Of course, power/thrash is also something that makes me slightly uneasy, so I listen to new releases in the genre with a little bit of reserve: so easy to fuck ’em up and make one’s life boring. Not with Dystopia. This album is a grower. Not like some albums ago, that grab you by your (in my case, imaginary) knackers and don’t let go. Dystopia takes a while to get under your skin, and the more you listen to it, the more you love it. I CAN’T WAIT to see these guys in 2012. So fucking excited.

Trivium – In Waves (Roadrunner)
I have, my entire life, dismissed Trivium since the band’s early days. I never liked their work, I refused (typical “nah fuck ’em”-style) to listen to them. And then I was played some of their instrumental works and I couldn’t deny their musicianship. And then I was drawn to In Waves because of its concept, tying visuals and music together. And I heard the album and hated myself for liking it. And sat through an entire DVD and enjoyed every minute of it. And now In Waves, simply for making me sit up and take notice of Trivium, absolutely must rank in my Top 10. Well done, guys, took a lot for me to notice what you’ve done, and what you’ve done has blown me away.

Autopsy – Macabre Eternal (Peaceville)
Autopsy came back to life, and the band’s first full-length in six years blew the world away (including me) by being the Autopsy we remembered from years ago. It couldn’t not be included here, it is absolutely fantastic. Every time I’m asked what the new Autopsy is like, my answer is, “It’s amazing, go buy it”. Because it is, and you should. Very few bands bring out something new after so long, and after splitting up and reuniting, and do something this good. I’m jealous of all you cats who have seen them.

EDITORIAL NOTE
Yes you got me, this list is of eleven albums. I had to add in the Autopsy release. I was out drinking last night, and talking about Macabre Eternal, and thought, “fuck me dead, it’s not on my list!!” Well, it is now. I can relax back into my hangover.