Shrapnel: Bits and pieces of metal 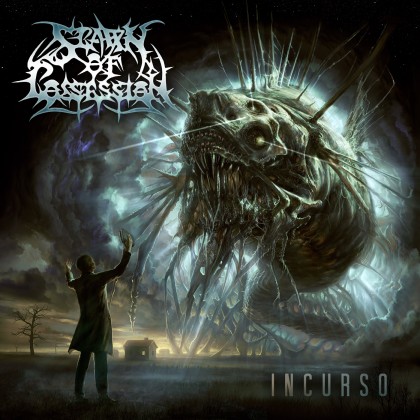 Welcome to the New Year! Here’s a bit of news to keep you happy.

Swedish tech-titans SPAWN OF POSSESSION have announced the final details for their upcoming third full-length, Incurso — the band’s first album for Relapse Records — which is already one of the most anticipated death metal releases of 2012.

Now confirmed to infest North American audiences on March 13th, Incurso was recorded with engineer Magnus Sedenberg at Pama Studios in Kristianopel, Sweden, and offers up nearly an hour’s worth of the band’s layered death metal urgency.

Utilizing devastating riffs, jaw-dropping time-signatures and improbably complex songwriting, the members of SPAWN OF POSSESSION have vowed to their diehard fans that their already internationally renowned technical wrath will be displayed at its finest and most demoralizing to date on this opus. Check out Incuro’s track listing below. The album’s striking cover art is by graphic artist Par Olofsson (Immortal, Immolation, Dying Fetus, etc.)

Hatchet Dawn roll into the other side of 2012 kicking off a new year of toxic horror rock with a special one night only show  at Melbourne’s House of Rock held at the Palace Theatre playing a live set sequenced to the song layout of the ‘Rebirth’ album from start to end. The set will also include special guest shock burlesque performer Miss Nic adding her interpretation and acts for key moments during the set on the night along with introducing the ‘Sexy Shock Dead Gals’ for the first time on stage with the band live. Even your goose bumps will have goose bumps!

Do not miss this one night only event for a special relaunch of the ‘Rebirth’ album in Melbourne for Hatchet Dawn’s first performance in 2012. Run out merchandise deals and the 3 page digipak ‘Rebirth’ LP containing the bands 13 new horrifying hits will be available for sale at the merchandise stand at the show.

Adelaide’s best thrashers will be out supporting Toxic Holocaust in Adelaide this weekend.

The show is at Fowler’s Live… for all details hit up this previous post, which also has other Aussie dates for Toxic Holocaust.

Underground black death’n’rollers Cauldron Black Ram have released a limited run of digipacks of The Poisoner Maxi-EP. This digi is only available for a short time (only 200 copies were released!), only through Abysmal Sounds (check CBR official site front page for details and links).

The jewel case CD and vinyl will be released worldwide later this month.

And they have also just launched their official website, which will gradually replace their MySpace. For all official CBR news, releases, details, and forthcoming tours (yes there are tours in the works!) hit up www.cauldronblackram.com.

British thrashers EVILE are currently gearing up for a headlining European tour in support of their critically-acclaimed new album, FIVE SERPENT’S TEETH.

The “Five Serpent’s Tour” is due to kick off on January 14th in Prague, Czech Republic, and includes 12 shows in Germany.  Supporting EVILE on the tour are PORTRAIT and DR. LIVING DEAD.

Don’t miss EVILE on tour in Europe at the following shows:

Get tickets for the German shows now from MetalTix at http://bit.ly/ADUnJM

Music For Nations was a British indie record label focusing mainly on rock and metal. They were a subsidiary of the larger label distributor Zomba Records and eventually got acquired by Sony Music UK.

The End Records recently secured 50+ titles from the now defunct label for North America. The physical versions will be issued over the course of several months starting January 31.

Andreas Katsambas spoke to Billboard about this exciting and seminal deal. Click here to see it.

RISING’s debut full-length, To Solemn Ash, is nearing North American release via Exile On Mainstream Records on January 17th, the Danish trio’s thunderous melding of sludge/stoner rock and straight-up classic metal captured on the LP with amazing production. Having already pillaged the Danish press as well as dozens of major metal/rock mags and zines across Europe, To Solemn Ash is starting to heavily root itself in the North American scene as the stateside release of the album nears.

Today Pitchfork is hosting a stream of the opening track to the album, “Mausoleum.” Check out the worldwide public premiere of the newly unleashed anthem RIGHT HERE.

To Solemn Ash will be available in a 4-panel digifile CD, gatefold 180-gram LP and digital download.