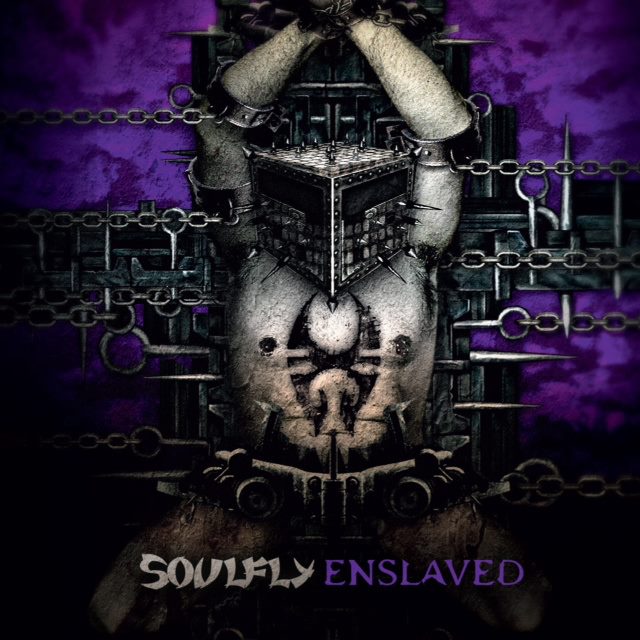 Max Cavalera is living legend in metal. Many of the older metalheads vividly remember him as the charismatic frontman of Sepultura. Back in 1996 Max left his old band and shortly after a resurfaced with a new band, called Soulfly. His career kept on flourishing while Sepultura steeply declined after releasing a couple of haphazard albums. Despite Max’s recent reunion with his brother Igor under the Cavalera Conspiracy guise, Soufly is still his main musical vehicle. Enslaved is the title of his latest musical venture.

Enslaved is first and foremost an excersise in Max’s hardcore and thrash metal roots. There are even some death metal flourishes here and there, courtesy of bassist Tony Campos (Prong, Ministry) and former Borknager skinsman David Kinkade. Unlike on the first three Soufly records, extensive forays into world music, dub and reggae are virtually non-existent on Enslaved. Only On “Gladiator” and “Redemption Of Man By God” “American Steel” and “Revengeance” is there some room for some more experimental parts.

The common thread through all Soufly albums is Max Cavelera’s familiar bark, his profound love for straightforward guitar riffs and powerful choruses. ‘World Scum”, “Gladiator” and “Legions” are poignant examples of how potent the old Cavelera formula still is.

A special mention should go the refined guitar playing by Marc Rizzo. His tasteful leads and solos add a level of sophistication to the Soulfly song material and it acts as the perfect counter balance for the straightforward and brute force which characterises Maxs’ style of playing. Each Soulfly album features a couple of guest musicians and Enslaved is no exception to that rule. This time around DevilDriver frontman Dez Fafara added some screams on “Redemption Of Man By God”. Travis Ryan of Cattle Decapitated fame did the same on “World Scum”.

The production chores were skillfully handled by Zeuss (Hatebreed, Agnostic Front) and Max himself. They gave Enslaved a direct, yet gritty sound. This enhances the overall aggressive feel of this album.

Drummer David Kinkade described Enslaved as “Arise on crack”. I think he’s right on the money there, because this album matches the ferocity and class of that famous landmark in Sepultura’s history. Soulfly may not be the cutting edge band it once was, but it’s still a relevant bulwark of power in today’s metal scene. Enslaved is a poignant celebration of Max Cavelera’s musical vision and his longivity.