I was so excited about this gig. I had planned to write a full review… but I failed. Read on to find out why. 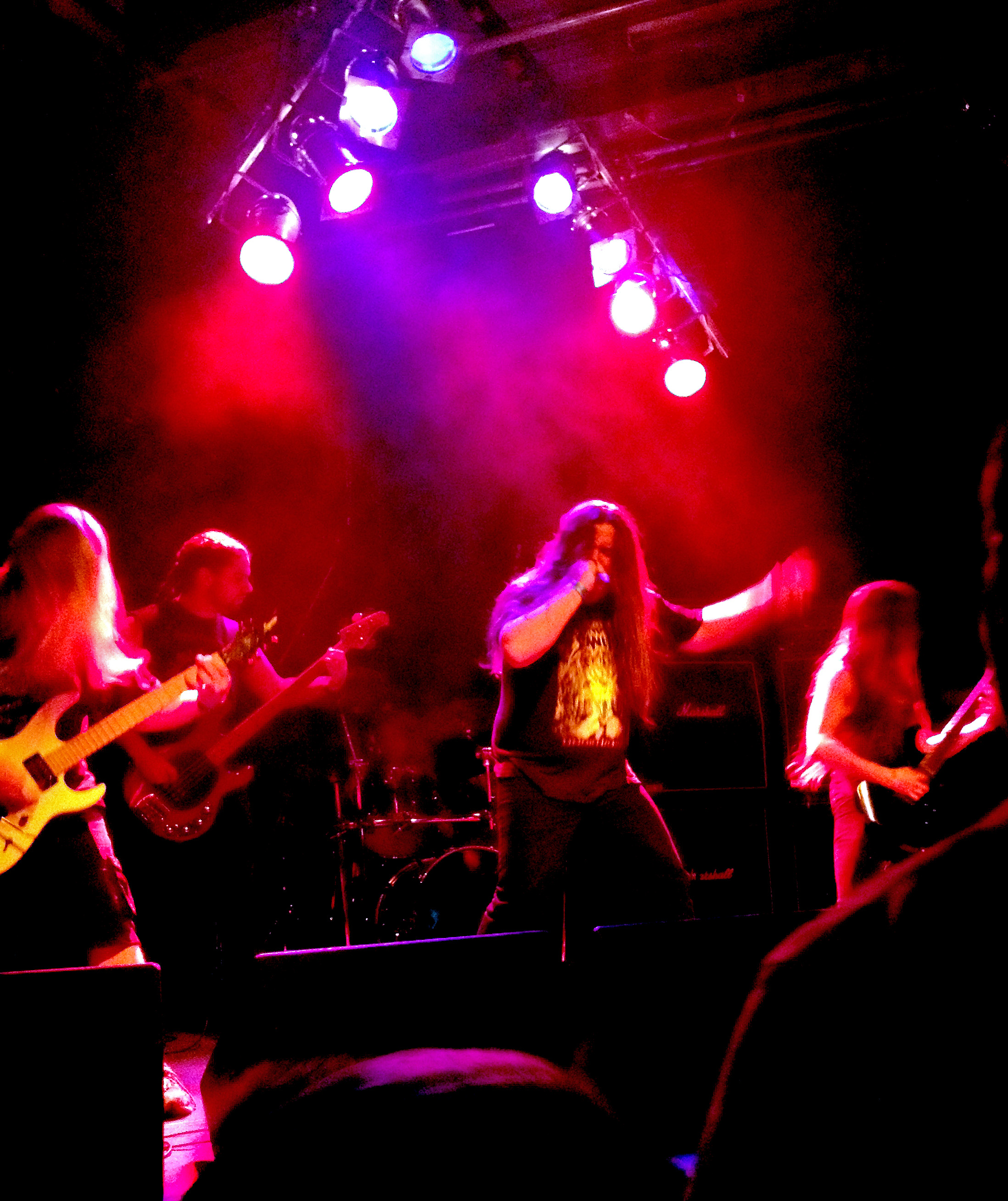 For weeks leading up to this year’s local underground metal festival, Black Conjuration, I’d been fairly excited. Then more excited. Then I started to think that it would be a great opportunity to get out my pens and pencils again and write a decent review of a live gig. And take some shots. Some of what I captured is in the gallery at the end.

Well, the best laid plans of mice and men, as they say… The intention was there, the outcome failed.

It wasn’t my fault. It was because of all of the amazing friends from interstate that I hadn’t seen for two years. And people locally whom I hadn’t seen in something like four years. This alone was truly a conjuring. Black Conjuration turned into Black Conversation. I haven’t talked so much in a fucking long time.

Staying at our place were Nicole from Sydney, Stu (Mournful Congregation) from the Blue Mountains, and the Infamous Josh (Doomed Beast) from Melbourne. Quiet drinks with Stu & Josh on Friday night (Nicky didn’t arrive til Saturday) turned into me drinking a bottle of wine waaaay too quickly and needing to crash out due to dramatic, drunken failure of eyesight. The boys kept going until something like 3 am.

I got up the next morning to find the Tia Maria empty. They drank through the beer and had a nightcap.

The rest of the day was a bit blurry and seedy. Lying around in various configurations on couches and chairs, someone piped up,

“What time do we have to be there?”

It turned out Mournful had to soundcheck because they were the rockstars of the evening, so we piled into the car and walked down to Fowler’s mid-afternoon, with Troy (Intellect Devourer) asking who wanted to sing his songs. Between us, we decided that we could feasibly take a song each, and then collaborate on another one. We felt it was a pretty good plan.

So, fast forward the rest of the afternoon. Nicky was at the venue, which was rad. Then Innsmouth (The Innes) turned up, all getting over the flu and still feeling like shite.

We all eventually shuffled off to The Strathmont for a pint. Meanwhile, I was on the phone to Todd (Innsmouth)’s missus because she couldn’t come to Adelaide and was missing us all. That lasted for like an hour.

Troy: “Who are you talking to?”

Troy: “Tell her to get on a fucking plane and come to Adelaide!”

She could’ve… but she would’ve ended up missing all but the last two bands, so really it would hardly have been worth it.

Heading back to Fowler’s, we ran into Denny (Intellect Devourer) and another dude from another band (Portal maybe?), whose name I didn’t get, but who was absolutely lovely. It was about 5 pm at this stage and food was on the cards. We walked the length of Hindley Street, before deciding on sitting down for Thai.

This Thai restaurant, whose name I can’t remember, is in where Govinda’s (Krishnas) used to be about a hundred years ago when I was a student. We ordered, had a yarn, tried not to go to sleep to the lovely relaxing music in there, and then the food turned up.

It was outstanding. Normally when you get something as boring as a Pad Thai, it’s all very peanutty and satay-ey, and thick and bleurgh. But this was light and sweet, flavours beautifully balanced, the peanuts were on the side. It was actually one of the best I’ve had.

Then towards the end of the meal I started to panic. I realised I didn’t have any cash on me at all, and had just seen the sign that said “no separate accounts”. I also had less than $60 in my bank account.

Stewing on this for a while, when we got up to pay, I offered to shove it all on my card (meaning, credit card) and the boys could pay me back. It worked! I got $30 cash in hand, and the meals were paid for. Brilliant!

That then meant I had enough money to buy water throughout the night and not turn into a pumpkin. The Thai was more expensive than a yiros, but an infinitely better meal to have ahead of a long night.

And with a lot less garlic.

Water, you say? Oh yes. I was the designated driver. I had one pint at the Strathmont, and that’s all I had for the entire night.

Sooo, eventually we got back to Fowler’s, and inside in time for the first band. Oath of Damnation.

These guys play a rather accomplished black/horror/death. They have a Nazi, a Priest, and Death. They play in front of a lectern, which is actually a really evil keyboard. Visually they were great. Sonically, they were frankly captivating. Watching Oath of Damnation is like watching ritual possession.

Unfortunately my photos are rubbish because they were taken on a phone. I’m sure you’ll forgive me. The gallery is at the end of this post.

By now more people had turned up, so we went outside for a fag and a catch-up. One person I noticed who was there was Makoto from Weird Truth Records. He flew all the way from Japan just to see Mournful Congregation at this show. He’s probably their most dedicated fan.

And don’t you tell me that real death metal is no longer relevant. I haven’t seen kids bang their heads like that for a long time. Fucking outstanding stuff. They plan to re-record their material and I can’t wait for it.

Plus, Intellect Devourer played a cover of Death’s Altering The Future, from Spiritual Healing. It was excellent! Even though Troy felt moved enough to apologise to Chuck afterwards for butchering the song. (Which they didn’t.)

Run outside for more fags and conversation between bands… and then next up were The Innes, of whom I promised Kylie I’d get a bunch of photos.

Why not, she’d do the same for me when my boy is in her town and I can’t go to the gig.

So, cutting conversation short with “I really have to see Innsmouth, I’m heaps sorry”, I darted back into Fowlers.

And by now the crowd is gearing up, has had more beers, is a bit more excited. Then Innsmouth started to play and that excitement ramped up some more.

At this point one of my best mates had turned up in the most fucking amazing leopard print jeans. She’d lived in Sydney for about a year and a half, and had never seen Innsmouth. She was shocked she’d never seen them. Innsmouth play Lovecraftian death metal that’s a bit sludgy, full of sexy riffs.

And watching Shoulders Dyer drum is always heaps of fun. He’s a really excellent drummer. I took way more photos than is in the gallery.

I discovered one good friend had been really sick thanks to spider bite. I discovered another friend, one I’d totally lost touch with, became engaged to her man in December. I discovered that there was another engagement just the other week. I found out that one person is not only in a professional bellydance troupe but is also entering her first bodybuilding competition in a few weeks.

You name it, I fucking well discussed it. Of course, the result was that I missed Inverloch, Mournful Congregation, Portal, Rote Mare, and any other bands that weren’t Oath of Damnation, Intellect Devourer, or Innsmouth.

I love Mournful Congregation, but I actually wasn’t in the mood for it. It was such a rockin’ mood, then you get funeral doom and people kinda lost their mojo for a while.

Amazingly (for Adelaide, I mean, not in general), there were over 300 tickets sold to this event. It makes it more successful than many metal festivals held in the town. People travelled from Melbourne, Sydney, Geelong, Brisbane… and Japan, for it. For a gig like this, everyone supports everyone else, so it’s a rotating door of people. They come to the show, they go in and out and in again, but they don’t leave until it’s done.

Proof in the pudding. And probably just as well it was moved to Fowler’s after all.

Huge congratulations to Ben on the success of this event! I’m looking forward to the next one. And rumour has it that perhaps there will be a smaller version held again in about six months’ time. We shall see.

GALLERY OF THE PHOTOS I MANAGED TO GET: