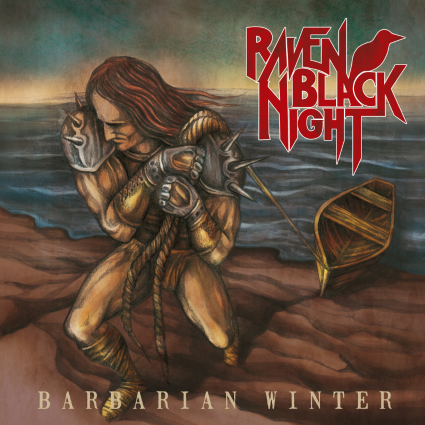 Raven Black Night’s Barbarian Winter is the band’s first release on Metal Blade; indeed, their first release on any major label. Hailing from Adelaide, South Australia, the band has been playing regular shows for as long as I can remember. Much of the material on Barbarian Winter is not new, and in fact appeared on previous independent releases such as Choose The Dark.

For those familiar with the band, you may well feel that Barbarian Winter sounds like songs have been lifted from Choose The Dark and simply remastered. Badly. The recording itself maintains fairly sub-standard production, and the mix, while effectively demonstrating the song writing, places vocalist Jim Petkoff’s vocals too highly. Not a problem, surely? Well, it is when the vocal lines are samey, occasionally off-key, and gradually – as you proceed throughout the album – rather annoying.

And anyone who is familiar with the band will know that this is not a singular, once-off issue. Jim always places his vocals too highly in a mix. Always. It’s not something that will change unless there’s a producer out there willing to have a fight on his hands.

Raven Black Night play metal-slash-doom-rock, and it’s a good description of what it sounds like. It’s down-tuned, bottom-heavy, presents some excellent riffs, and melodically and rhythmically is nicely written. Clean, often high-pitched vocals permeate the release, and the ballads – which local punters will remember from nearly every set the band has ever played – are included. Those ballads give the release the diversity it needs to lift it out of the mire.

Unfortunately, the album’s production lets it down in a big way, and it’s not something easily gotten past. It’s actually what nearly considered me to rate this album down as being literally sub-standard. More particularly given the label that it’s on.

I’m hoping that Raven Black Night can pull some tricks on their next release to better showcase their capabilities. Starting with a better recording, a better mix, and (for a local girl like me) a whole raft of brand new material. There is a seriously large difference between lifting old tracks for your world-stage debut, and re-recording only your best work.

New listeners, however, will likely judge this album less harshly than myself. Barbarian Winter is a decent indication of what the band is capable, even though the overwhelming outcome is “wow this is crap”.

The release is not likely to make most fans of the genre sit up and take much notice, because an overall assessment of the bad production, the poor mix, the sameyness in it… it’s not particularly close to “good”.

With a push in the right direction recording-wise – with a strong-willed producer – the band’s next album may take us all surprise. But by hell they’ll need to work really hard to get to that place.

So, until then, we sit and wait and see.

THE SHORT VERSION OF THIS REVIEW FIRST APPEARED AT ABOUT.COM HEAVY METAL. Click here to read it.

Edit: apologies for getting the title wrong; full error on my part due to misreading.