You’ve got screen addiction, motherfucker. In this post, I strip you bare and show you how I know.

Screen addiction is something, it seems, that many minds are considering lately. Here is the original post, as it was originally written (well, photographed).

There are three images here, but also is the full text. The full text is located below the images. 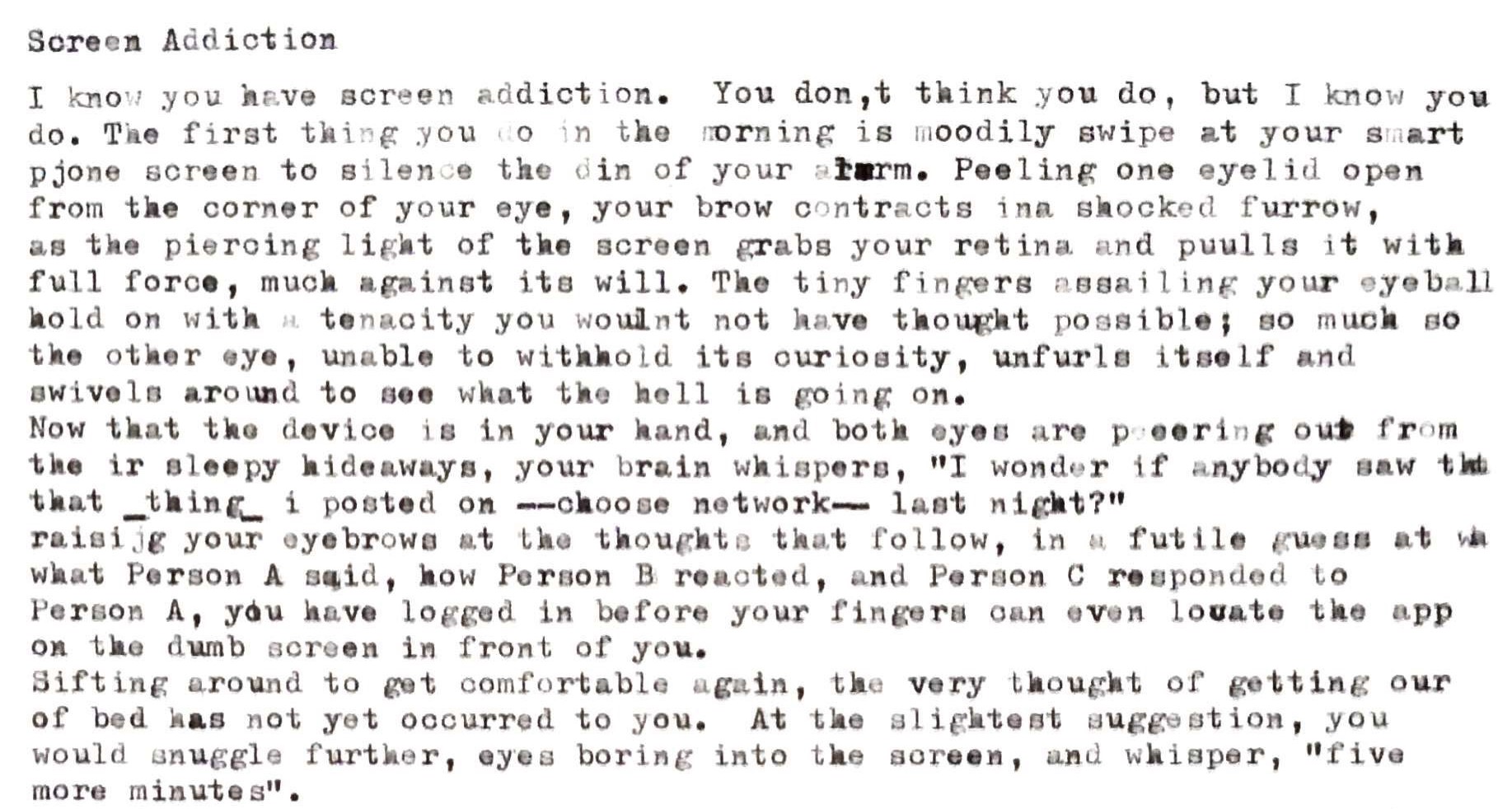 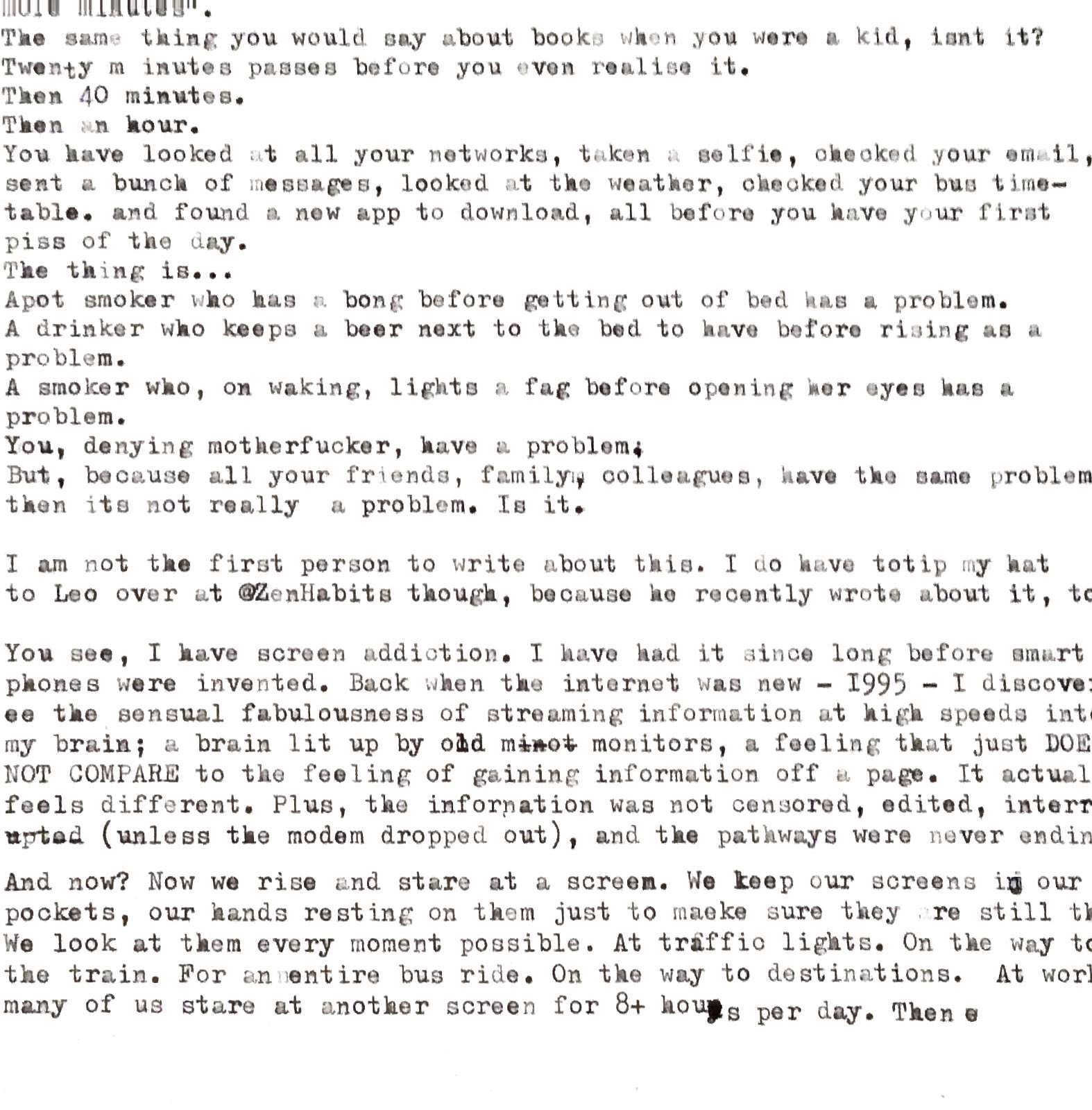 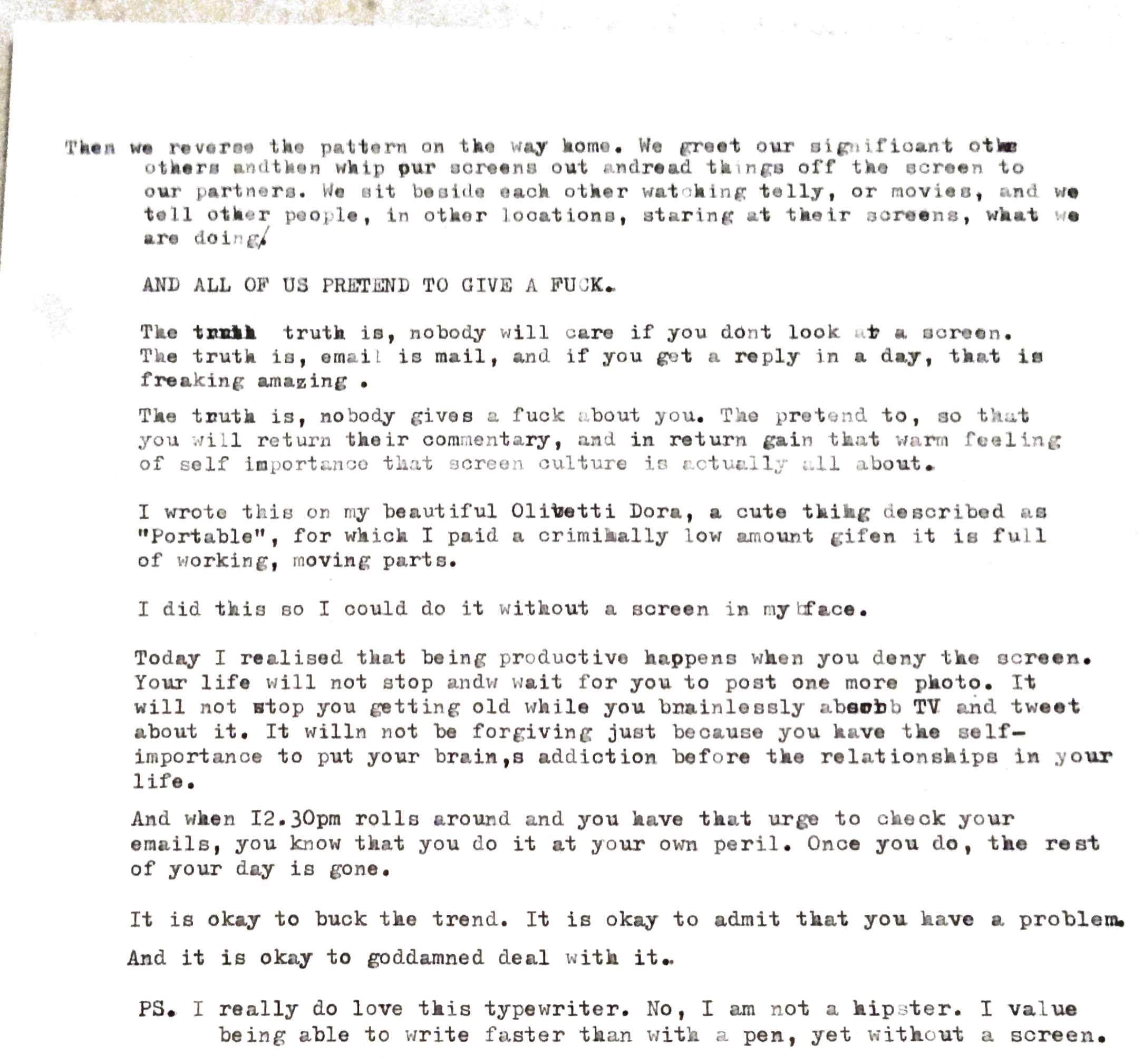 Full text of ‘On Screen Addiction’

I know you have screen  addiction. You don’t think you do, but I know you do. The first thing you do in the morning is moodily swipe at your smart phone screen to silence the din of your alarm. Peeling one eyelid open from the corner, your brow contracts in a shocked furrow, as the piercing light of the screen grabs your retina and pulls it with full force, much against its will. The tiny fingers assailing your eyeball hold on with a tenacity you would not have thought possible; so much so that the other eye, unable to withhold its curiosity, unfurls itself and swivels around to see what the hell is going on.

Now that the device is in your hand, and both eyes are peering out from their sleepy hideaways, your brain whispers, “I wonder if anybody saw that thing I Posted on –choose network– last night?”

Raising your eyebrows at the thoughts that follow, in a futile guess at what Person A said, how Person B reacted, and Person C responded to Person A, you have mentally logged in before your fingers can even locate the app on the dumb screen in front of you.

Shifting around to get comfortable again, the very thought of getting out of bed has not yet occurred to you. At the slightest suggestion, you would snuggle further, eyes boring into the screen, and whisper, “five more minutes”.

The same thing you would say about books when you were a kid, isn’t it?

Twenty minutes passes before you even realise it.

You have looked at all your networks, taken a selfie, checked your email, sent a bunch of messages, looked at the weather, checked your bus time-table, and found a new app to download, all before you have your first piss of the day.

A pot smoker who has a bong before getting out of bed has a problem.

A drinker who keeps a beer next to the bed, to have before rising, has a problem.

A smoker who, on waking, lights a fag before opening her eyes, has a problem.

You, denying motherfucker, have a problem.

But, because all your friends, family, colleagues have the same problem, then it’s not really a problem. Is it.

I am not the first person to write about this. I do have to tip my hat to Leo over at Zen Habits though, because he recently wrote about this too.

You see, I have screen addiction. I have had it since long before smart phones were invented. Back when the internet was new – 1995 – I discovered the sensual fabulousness of streaming information at high speeds into my brain; a brain lit up by old monitors, a feeling that just DOES NOT COMPARE to the feeling of gaining information off a page. It actually feels different. Plus, the information was not censored, edited, interrupted (unless the modem dropped out), and the pathways were never ending.

And now? Now we rise and stare at a screen. We keep our screens in our pockets, our hands resting on them just to make sure they are still there. We look at them every moment possible. At traffic lights. On the way to the train. For an entire bus ride. On the way to destinations. At work, many of us stare at another screen for 8+ hours per day. Then we reverse the pattern on the way home. We greet our significant others and then whip our screens out and read things off the screen to our partners. We sit beside each other watching other screens together, telly, or movies, and we tell other people, in other locations, staring at their screens, what we are doing.

AND ALL OF US PRETEND TO GIVE A FUCK.

The truth is, nobody will care if you don’t look at a screen.

The truth is, email is mail, and if you get a reply in a day, that is freaking amazing.

The truth is, nobody gives a fuck about you. They pretend to, so that you will return their commentary, and in turn gain that warm feeling of self-importance that screen culture is actually all about.

I wrote this on my beautiful Olivetti Dora, a cute thing described as “Portable”, for which I paid a criminally low amount given it is full of working, moving parts.

I did this so I could do it without a screen in my face.

Today I realised that being productive happens when you deny the screen. Your life will not stop and wait for you to post one more photo. It will not stop you getting old while you brainlessly absorb TV and tweet about it. It will not be forgiving just because you have the self-importance to put your brain’s addiction before the relationships in your life.

And when 12:30 pm rolls around and you have that urge to check your emails, you know that you do it at your own peril. Once you do, the rest of your day is gone.

And it is okay to goddamned deal with it.

PS. I really do love this typewriter. No, I am not a hipster. I value being able to write faster than with a pen, yet without a screen.

2 thoughts on “On screen addiction”