[REVIEW] The Darkest Shade of Grey, by Alan Baxter (The Red Penny Papers)

Alan Baxter’s The Darkest Shade of Grey is a gripping little foray into a place between two realms… accompanied by a drunk journalist with a frayed life. You won’t want it to end. 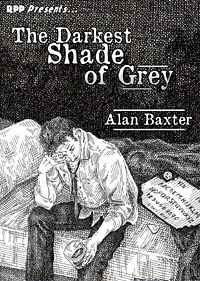 The Darkest Shade of Grey by Alan Baxter
My rating: 4 of 5 stars

If for some reason you believe you don't have time to read a novel-length book, do yourself a favour and pick up this title by Alan Baxter.

Already a self-confessed fan of Baxter's work, the Darkest Shade of Grey is one that I hadn't read. But its landscape is a place with which I am already deeply familiar. Walking the line between good/bad, through the veil of seen/unseen in Sydney, reading stories set in Baxter's two realms is kind of like coming home.

And, to be fair, I had it when I gush about a book. I hate it even more when the author is a friend, because it looks like pay for play.

But the truth is, I ate a late lunch after coming home from the market. And while I sat drinking post-brunch apple juice, I thought I'd read a few pages of this book. A little while later, startled at the fact that the story had already finished, I sat up and blinked and wondered where the time went.

The Darkest Shade of Grey is a short story about an alcoholic journalist with a fraying life (you know the guy, you've seen him in a million works since the 1920s) whose fascination with the occult gets him into deep water. With, you know, demons. As with Baxter's other protagonists who tend to find themselves inadvertently wound up in these weird, dark, fantastical situations, David Johansson does just that. Curiosity got the cat, you might say.

The beautiful thing about The Darkest Shade of Grey is that you are drawn into the story just far enough to become part of the protagonist's struggle, for just a tiny window of time. It's a well-formed short story, a snapshot of a life at a critical juncture: One that you will finish, startled, and then go back and re-read simply because you don't want it to have finished.

Of note is that the ebook of this title is beautifully formatted; perfectly, in fact, for the screen. So, congratulations to the publisher for that - a huge amount of ebooks aren't purposely set, and to have one that is, is a great relief.

1 thought on “[REVIEW] The Darkest Shade of Grey, by Alan Baxter (The Red Penny Papers)”