This May, Adelaide audiences were lucky to be treated to such an extraordinary retelling of George Orwell’s seminal work, 1984. This show of 1984 is utterly arresting. 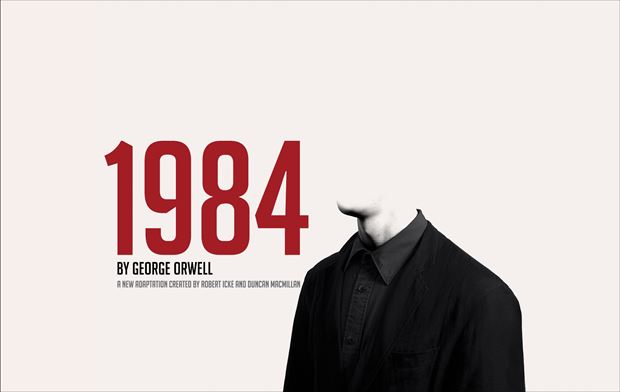 This May, Adelaide audiences were lucky to be treated to such an extraordinary retelling of George Orwell’s seminal work, 1984. This show of 1984 is arresting.

When I was a child, perhaps about eight, maybe ten, years old, I discovered my dad’s copy of George Orwell’s 1984. I don’t recall where it was, or how I found it, but I remember reading it with fascination and horror. At the time, it was a fantastical dystopia, a society that was so far removed from my white, country-town, Australian life, that I absorbed every detail, every texture, every image of the work with an intensity that only children have.

The story stayed with me, as I hope(?) it does for all who read it.

With every year that passed, I read the book again, gaining new insights and notions. As society gradually developed, the reading changed from fascination with a dystopian fantasy to a count-keeping exercise. How many things could I see in my own society that were in this book? First we had screens in every house. Then we had cameras everywhere. Then we had devices with cameras. Now we have screens with cameras.

With the internet, we gained a media that can more easily reinforce the same message.

With social media, we gained a self-policing society, a place in which every person is now a cop, a place where we censor ourselves lest we be dragged through the mud into a public place, abused, threatened, bashed, and left to bleed on our own, psyche and reputations destroyed. We have groupthink in its most visceral and realistic sense, an echo chamber of opinions that is self-reinforcing, and an inability to challenge, question, or criticise whatever the dominant thought is in any sense, from politics to the environment; from relationships to education. Those of us with dissenting opinions learned, thanks to trolls and bots, to quiet our outputs, or feel the pain.

Now also, thanks to social media, we have the two minutes’ hate.

At the conclusion of the play, the very apt question as to whether or not the book was real, or whether or not we are actually living in an environment so adapted that we wouldn’t be capable of knowing (even if we were), was perhaps the most remarkable element of the performance. I was horrified at the laughter that rippled through the theatre. I wondered whether they were blind, or uncomfortable, or something else; in any case, the sharpness of the point was clearly lost on them.

When I first saw a poster for the stage performance of 1984 on the back of a bus, I stared in absolute disbelief. It was somehow amazing to me that the petri dish echo chamber of the western world’s Australian intelligentsia would even allow such a bold performance. We keep ourselves in our own little boxes. Even our protests follow dominant groupthink and do not challenge the boundaries that are already in place. When I saw the bus poster, I was on Goodwood Road in Wayville, at an intersection.

I got home and bought two tickets. My husband, who never goes to the theatre, came with me, however grudgingly.

As someone for whom Orwell’s work is woven into her skin, I was curious about how the work had been rebuilt for a stage performance. There is so much nuance in Orwell’s work, so many little parts that require the most sensitive handling lest they be lost, or forgotten. The stage is finite, the story so large.

The way that this adaptation has been constructed is that all of the questions that Orwell’s work causes us to ask, are asked up-front. Is the book real? Was 1984 really like this? (Pro tip: No, it wasn’t.) Is it his reality or our reality or some other shifting reality? Are we in Winston’s head or is he in ours?

The repetitive nature of the 1984, party-formed society was handled with the greatest adroitness, formed as actual repetition, Groundhog Day style. If you’ve read the book, you may be wondering what this does to the story. In fact, it pulls you out of the story just far enough that the terrifying sameness of groupthink and newspeak, when it is the reality of being lived, hits you in the face. For, the life inside a Party member in 1984 is one in which you can only exist today. We are at war with EastAsia, therefore we have always been at war with EastAsia; chocolate rations are being increased to 20 grams, but they were yesterday and the day before… but it doesn’t matter because we only live right now. We are goldfish, the news comes and the news goes, and we don’t ever really absorb any of it, notice or remember what happened yesterday, or – come to that – even care.

If you don’t see current society in this, then you won’t appreciate the play and should probably continue living your life with your eyes shut and your ears closed.

There were some absolutely remarkable elements in this work. One was the use of sheer scale of volume and strobed light to create impact, shift, and intensity. It was so loud that the floor vibrated, and the shifts were so fast that you were thrust into the difficulty of Winston’s mind.

The second was the use of live film, secondary rooms, and other constructions, to enable the depth of narrative that 1984 demands. We are simultaneously watching live performance, while being Big Brother ourselves, and seeing how it interacts with the rest of the story. This might be common in theatre, but as someone whose most recent theatre experiences have been for dance theatre rather than performance or acting theatre, it was remarkable. First I assumed that the film had been pre-recorded. But the live sound made me wonder if a secondary room had been constructed, and that was actually the case.

When Winston was being tortured in the Ministry of Love, the violence was played out with real strength, as was the cynical persuasion of O’Brien himself. The two were like salt and caramel together: Somehow far more than their singular parts.

It’s an extremely powerful work, and the interpretation of the work has been masterfully crafted.

As for the cast? There were only two team members whom I felt kind of let the team down. They were Ursula Mills (Julia) whose intensity was lovely but unbelievable. She was also far more wooden and staged than anybody else in the cast, aside from the young girl. Of the two, Ursula’s woodenness was harder to deal with, because she’s a much more mature actor. She clearly enjoyed playing the role, and she was 100% present, but she was not fluid in the way that the role of Julia demands her to be: Simultaneously hard and soft. She had the hard in spades, but the softness and the boundary between the two was just missing. Sorry, Ursula; you’re a great actress but there’s something in the greylands in between the hardness of Julia’s pretence and the softness of her heart that is missing, and it could be that the softness is just more difficult to craft, given the two-faced nature of the character.

This show of 1984 is arresting. If you haven’t got your tickets to it, you absolutely must. And you only have seven more days left in the run, with final performances occurring on 27 July.

And as for my husband? Let’s just say that even though he’s not the theatre-going type, the conversations we had after the show indicate that 1984 had a striking impact on him, too.