LeticiaWrites has been a successful experiment. Here’s what I have learned.

The #LeticiaWrites was a resounding success. Here’s what’s going to happen in 2019… and a special offer for my anniversary in January. Read on! 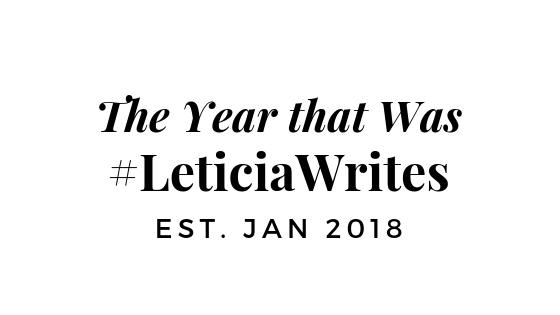 On the first day back at work this year, which was 3 January, it was a Wednesday. Over the holidays I had decided that I was going to take Wednesdays off this year in order to work on creative projects that would stretch me, that would function as professional development, that would nourish me creatively in some way.

I faced the most insane debate with myself that first day. I very literally stood stock-still in my living room, asking myself, Do I do this, or not?

Which means that not going back to work, after a few weeks off in which I generated loads of new ideas and thoughts about what I could do, was an agonising decision.

I worked on myself, instead.

I started this Patreon community the same day.

I launched it on Twitter, and by the end of the week most of you guys were already patrons.

Can you believe it’s been a whole year?

Over the course of the year, I have learned:

My Patreon patrons, and you guys who read my work, are all my fans. I think to hang around with me over the course of an entire year is an epic effort, and I want to thank them so much for being here to encourage me to keep going even when I felt like I couldn’t reach, like things were going nowhere, that I am hopeless, and that I couldn’t afford to keep doing it.

I’m not exactly an angst-free kind of creator, even though I don’t drink, I don’t smoke, I don’t do any drugs, I generally dislike parties, and I go to bed at 9 pm. So, thank you.

I thank my patrons a LOT but I really do mean it.

So what this means is that 2019 is going to continue Wednesdays off every week. In 2019, we’ll see #LeticiaWrites get into an even more stable rhythm, with ever more cool things going on. If you want updates on these days, go join the Telegram channel. That’s where all the action is. 😉

If you become a patron, or you upgrade your patron tier, before 7 January 2019, you will get:

How fun! Here is to a second magic year of creation.

Add yourself to my email list for occasional offers and updates: