Twitter, is this goodbye after 10 years? Let’s find out

After 10 years of Twitter, I’ve deactivated my account in pursuit of a new way of life and – perhaps – a better method of engaging with readers like you. 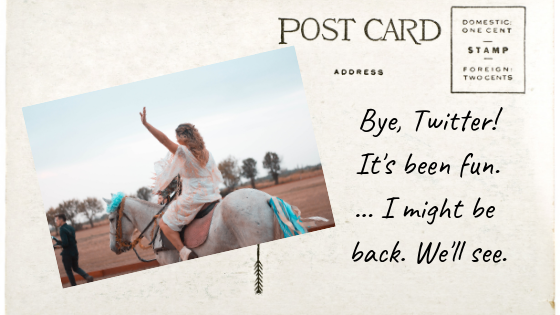 This year I celebrated – or, perhaps, mourned – 10 years on Twitter. To celebrate, I’ve deactivated my long-standing personal account (@biodagar) until just after Christmas. It will be curious to see what effect it has on my ability to reach readers, if any. Realistically, I’ve been on Twitter for almost as long as I’ve been blogging. I don’t think I’ve ever just done one thing or the other.

This was a big decision for me to make, though not a difficult one. After recently being banned by the Twitter Police, I realised how freeing it is to have zero personal social media. The only ones I have left are designed 100% for work – and will stay that way.

Some have said that your phone is The One Ring, others that Facebook is one network to rule them all.

I propose that it’s a little of both.

Deactivating my Twitter account was almost exactly like that moment when the cicadas stop and their absence makes you realise they were insanely loud. The relaxation was immediate and complete. Suddenly there is nothing to check. No nagging notifications. No conversations you’ve missed, no opinions to check in on. No reason to pick up your phone, scroll endlessly, speak mindless babble about stuff nobody else cares about.

There is just this open-ended, unmitigated freedom, one that is compelling, beautiful, and filled with time. You rediscover how to spend your time. So far mine has been taking care of my house, reading books, writing letters, thinking of amazing new projects, progressing existing projects.

Truth be told, I’m a sucker for a social media feed, and getting out of the digital world and back to the real world can only be good for me.

Though, admittedly, I only did it after receiving a challenge in an email list. Yeah I’d had about six months of thinking about doing it; but the challenge was too much to ignore.

This particular email guru suggested that it’s just 29 days; that in those 29 days you could spend the time you used to be on social media actually building something effective, like a sales platform that works, or a new project that might change your life. That if you really want to use it again, you can reactivate it – no problem.

But if not? Then you don’t have to go back.

For some of us who have been using digital channels for the best part of our careers, it can feel like there’s no other way to do things. No other way to promote them. No other channels by which you can reach people. But, really, when you’re talking to the same 1400 people constantly are you really reaching anyone? Not any more. Which is why, over the next month, I intend to start stretching my muscles in other directions.

I’ll be posting here more about this, so if you want to make sure that you get all subsequent thinking and info on where this goes, add yourself to my email list so you don’t miss out: