To demonstrate the power of language, I translated a section of Trump’s 2020 West Point Commencement Speech using the root meanings of the words. 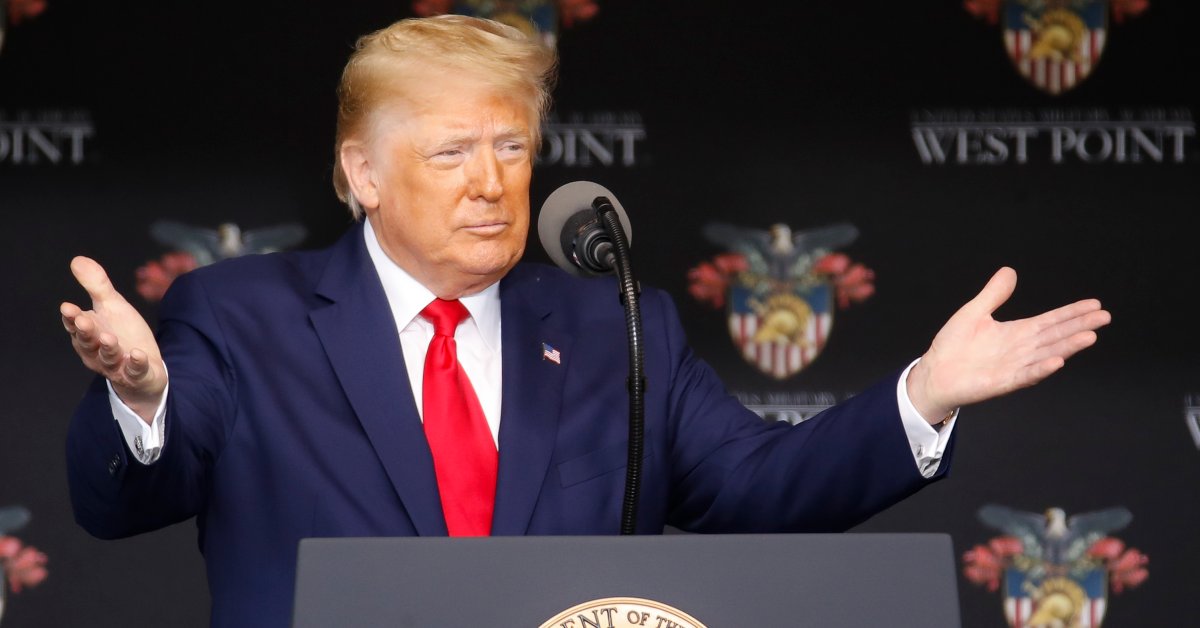 The etymology of words is a fascinating subject, and one that every writer ought to study. Just, you know, don’t get obssessed like I do. You’ll spend your life fascinated by what’s really going on. Ha!

In any case, as a writer, going back to the root meanings of words can fundamentally shift your narratives, characters’ speeches, and much more.

Speech, in particular, takes on a wild and new character.

To demonstrate language’s power in this exact domain, I’d like to give you something special.

Below is a rousing section of President Trump’s West Point Commencement Speech for the Class of 2020. But, I’ve written it with the original meanings of terms and phrase restored.

If you want to read the transcript of the speech itself, you can do that at Rev.

Fun with etymology: A rousing section of Trump’s West Point Commencement Speech for the Class of 2020

Here is my rewritten component of President Trump’s speech:

At the present time, America is impelled to have, of necessity, a group of students (who will be entering the military as a profession) who will continue in life according to a maxim they adopt as a rule of conduct: “Toward the thing we see, we will act to lead from the front”. I and all others are in distress and lack the vital principle that animated General Ulysses S. Grant; you must conduct yourself as he did. Directly he took upon himself the supreme power over everything in the military, after applying himself to three years of the Union’s prevention of his progress, General Grant met a person who was advancing towards the North, towards Washington, through the continuance of the hostile fight of the wild and uninhabited place.

“If you encounter the executive officer of the republic,” Grant mentioned, “Announce that regardless of what comes to pass, then in that respect at no time will we retreat.”

I, and all others, compel you to be able to see visions. Like Patton, who, as a youthful, adult human being in the year 1917, obtained the position (as the first one of those who serve in the army for pay) appointed to the Army Tank Corps. A single twelfth of a year after being intensely involved in the work, he beheld in his imagination, or in a dream, that which was yet to be. He set down in writing: “If our making a stand against the adversary separates us by force into parts, the armored, gun-mounted vehicle that moves on continuous articulated tracks is obliged to take upon itself the character and function of soldiers who march and fight on horseback, and move forward until the one who is hateful toward us and intent on harming us ceases life.” In the presence of Patton’s command, that is what they did.

And now, the original paragraph:

Right now, America needs a class of cadets that lives by your motto, “With vision, we lead.” We need you to carry on the spirit of the great General Ulysses S. Grant. Soon after assuming overall command following three years of Union setbacks, General Grant encountered someone heading north to Washington during the Battle of the Wilderness. “If you see the President,” Grant said, “tell him from me that whatever happens, there will never be no turning back.” We need you to be as visionary as Patton, who, as a young man in 1917, became the first soldier assigned to the Army Tank Corps. One month into the job, he saw the future, writing, “If resistance is broken and the line is pierced, the tank must and will assume the role of pursuit cavalry and ride the enemy to death.” Under Patton’s leadership, that’s exactly what they did.

If you’re the kind of writer who’s really into period drama, this is a super easy way to shift your character’s language.

But it also allows you to see what meanings you (or they) are relying on all the time. Perhaps in a future blog, I will write some more on the topic, but as using language to unpack your characters’ motivations, fears, and limiting beliefs. If you’d like that drop me an email and let me know.