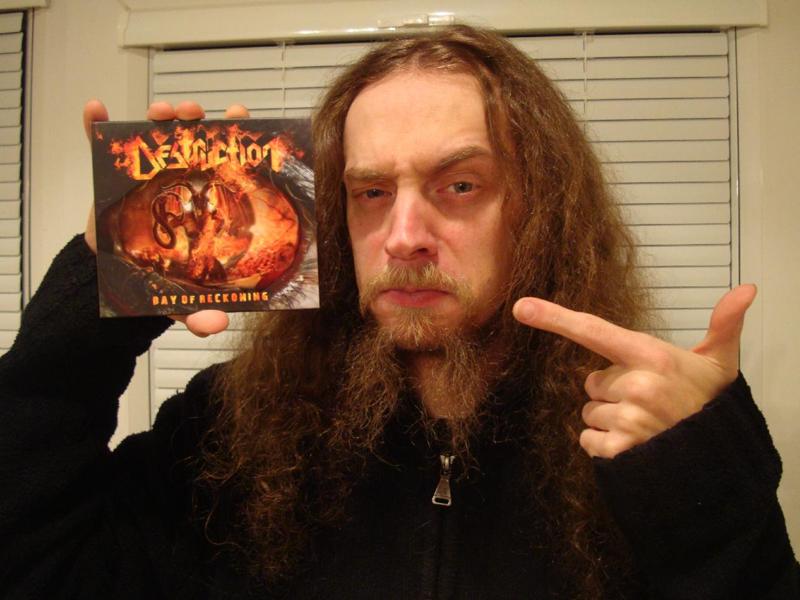 OL DRAKE (of EVILE fame) had previously filled in for DESTRUCTION guitarist MIKE SIFRINGER in 2009 at Portugal’s Caos Emergente festival, after SIFRINGER broke a finger on his left hand. DRAKE was asked to join the German thrashers in the studio to play some solos and harmonies on the new DESTRUCTION release, titled DAY OF RECKONING.

“Just got a package through the mail from sir Schmier, which contained the newest Destruction album, “Day of Reckoning”. I had the huge honour of doing a few guest solos and harmonies on the album, as well as on their awesome cover of Dio’s “Stand Up and Shout” (which is one of my favourite Dio tracks!). To fly over there, do some recording, backing vocals and hang out with Mike and Schmier again was an experience I’ll never forget.

“Being a big Destruction fan, I can’t put into words how unbelievable it is, and was, to be a part of the album. Also, with being a Destruction fan, I can safely say this is one of the best albums they’ve done in a long time (no, not because I’m on it… Well, a little haha). Our old bassist, Mike, was a huge Destruction fan, so I really hope he’d be proud. I remember when I told him I’d be standing in on guitar for Destruction’s Mike at a show in Portugal; he simply called me a “bastard”. I think he was more excited than I was haha. Long live Destruction!”